Alco dynamic brakes with their distinctive whine are holding back the heavy tonnage of Northern Pacific Train 654 (Barstow, Calif., to Pasco, Wash.) descending the Snowline grade. The three Spokane, Portland, & Seattle C636s are from Lowell Smith. 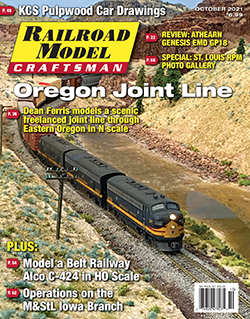 By Dean Ferris/photos by the author

My N scale Oregon Joint Line started out as an idea for an ultimate freelanced layout during my teenage years nearly four decades ago. This was the era when the first big freelanced (but realistic) layouts like the Virginian & Ohio were making waves in the hobby and I was completely sold.

I carefully laid out my route for the “Pacific Northern Railroad” from my native Port of Grays Harbor, Wash. on the coast, over the Cascades Mountains and across the Columbia River into Oregon, then southward via the John Day River Canyon, ultimately meeting up with the Western Pacific and Southern Pacific main lines in Nevada. My plan was to model the portion from Grays Harbor through the Cascades to Yakima, but I took the effort to “survey” the entire line using topographic maps, keeping grades to a maximum of 2.2 percent.

Years later, after I decided to make the switch from HO to N scale, I found myself drifting from the freelanced concept, and searched for an idea that would allow me to incorporate all my favorite Western fallen flags – especially my hometown road of Northern Pacific. I’d always liked the canyon scenery and operations of Spokane, Portland, & Seattle Railway’s Oregon Trunk route running north-south along the Deschutes River in central Oregon with its run-through power and trackage rights. 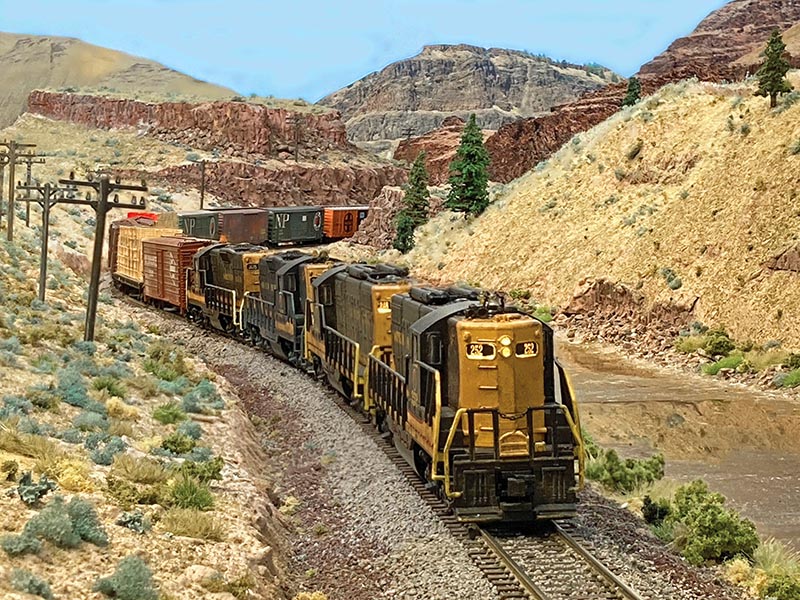 ABOVE: Just like the prototype railroads of eastern Oregon which mainly follow watercourses through the rugged territory, the Oregon Joint Line follows the South Fork of the John Day River for many miles. The river covers 35 feet on the layout.

I decided I could model a competing Northern Pacific route via the paralleling John Day River following most of the same route I’d “surveyed” as a teenager. Because I’ve always also liked the Great Northern, I added a GN line running diagonally across eastern Oregon toward Salt Lake City. I joined the GN and NP lines together for an 80-mile stretch in East Central Oregon, forming what I called the “Oregon Joint Line.” Choosing an era was not an issue for me – it had to be just prior to the Burlington Northern merger which combined the GN and NP in March 1970.

While growing up along the coast of our native Washington State, my brother Brian and I were HO modelers from a young age, thanks to equipment left to us by an older cousin. About the time I hired on as a switchman with BN in 1994, a friend introduced me to N scale and I was surprised to see how far the reliability and appearance had improved compared to what I’d seen as a kid. I began to accumulate equipment and built a few small layouts. In 2005, I accepted a position at BNSF Railway headquarters at Fort Worth, Texas, and began the search for a new home for my N Scale empire. After looking at dozens of houses I was finally able to find a perfect over-the-garage 25×28’ layout room with straight walls, no dormers, entry through the garage only, and its own bathroom.

Design
With the large space I didn’t feel the need to do a fully double-decked design. Instead, I relegated the lower deck to staging only. Initially, I connected the two decks with a three-turn helix, but I was unhappy with it and replaced it with a peninsula that allows trains to climb to the upper level on a 1.8 percent grade. 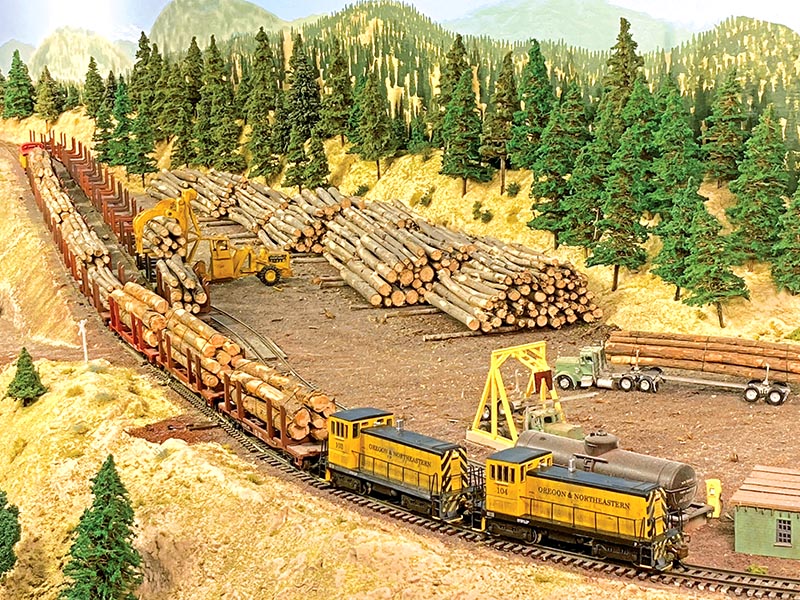 ABOVE: The Oregon & Northeastern “Logger” is departing Canyon Reload for the run back to the mill complex at Scanlon, Ore., while a Wagner Lumberjack log stacker has already begun loading logs onto the empties delivered by the Logger earlier in the day.

I designed the layout with a 275-foot single-track main line featuring four yards and four passing sidings to accommodate the heavy traffic flows I had in mind. Siding lengths were set for 25-car freight trains, and mountain grades leading from both directions to the summit at Snowline would make for interesting helper operations. I also incorporated two forest products short lines – the Oregon & Northeastern Railroad, which is a nod to the actual Oregon & Northwestern Railroad based in Hines, Ore., and the Anderson & Middleton Westpine Operation. A&M was the company that owned the mill on the coast of Washington where our dad worked for most of his adult life; my brother and I worked there in summer during our college years. Since Union Pacific was the only Class 1 railroad that actually had operations in the OJL’s region, I included a UP branch connecting with the OJL main line at Emigrant. The UP Burns Local has trackage rights to interchange traffic with the NP at Silvies Yard and the A&M at Westpine.

Northern Pacific operations are focused on forest products moving from the Pacific Northwest to California via run-through trains to the WP, SP, and Santa Fe. GN operations are pointed east toward Denver via a connection with the Denver & Rio Grande Western at Salt Lake City.

At both ends of the Oregon Joint Line, the GN and NP split (Humboldt Jct. to the south, GN Jct. to the north), and then enter staging. With the ability to hold 26 trains, reversing loops are located at each end of staging. There’s also a continuous run connection between the north and south staging yards with two tracks that hold loaded and empty coal trains. 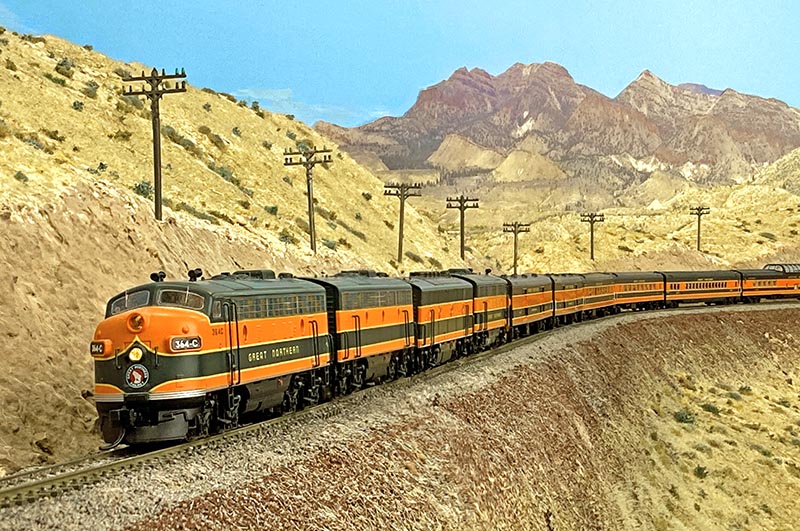 ABOVE: Great Northern Train 66 (Salt Lake City to Seattle) flows over “Curve 57,” so named because of its 57” radius (equivalent of 105” in HO). Even the longest equipment looks good on a curve as broad as this.

Setting the Scene
While most people associate Oregon with the rainy coast, the eastern half of the state beyond the Cascade Mountains is quite arid. The OJL’s east-central Oregon setting is one of the least populated areas of the country. Burns, the largest town with a population of only 2,800, is more than 100 miles away from the nearest larger town. To enforce the feeling of loneliness in this territory, I’ve included very few scenes with people, but there are plenty of sheep and cattle. Businesses appear to be anything other than prosperous, many homesteads have been abandoned, and most vehicles on the road are pickup trucks. The LED lighting I use is a bit harsh and my landscape is stark, mostly covered by dead grass – all of this enforces the inhospitable nature of the region.

Following the prototype railroads of eastern and central Oregon, much of the trackage is located in canyon bottoms with walls of basalt rock from ancient lava flows. I knew to be true to the regional landscape I had to find an acceptable means to model the basalt. I tried various rock castings but was never satisfied with the look. Finally, I stumbled onto a method of creating acceptable looking basalt by using a sharp hobby knife to carve stacked layers of DuPont Pink foam, painting them an appropriate base color, and then applying washes over the top to avoid uniformity. This was incredibly time-consuming but well worth it from my standpoint as it allowed me to reasonably capture the required look…

Read the rest of this article in the October 2021 issue of Railroad Model Craftsman. Subscribe Today!