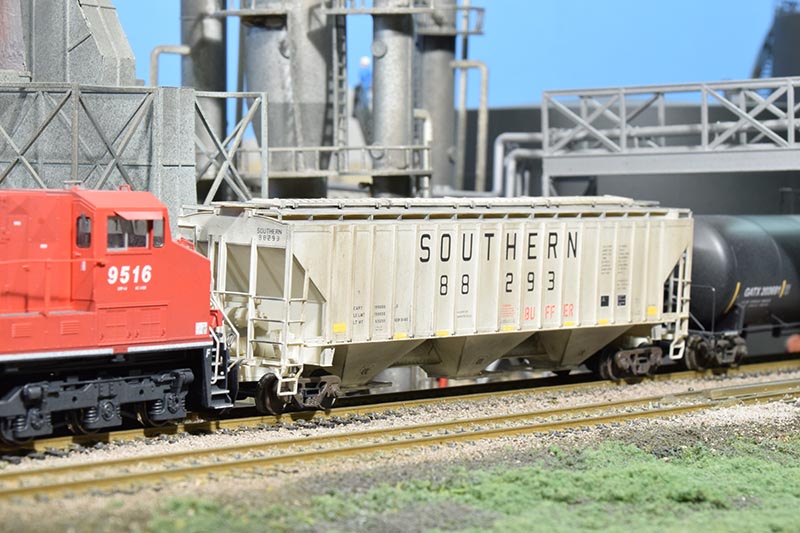 An old Southern Railway covered hopper now serves as a buffer car on a train of crude oil being delivered to a refinery in northern New Jersey. These cars are easy to model using off-the-shelf kits and custom decals.

By M.R. Snell/photos by the author

One of the challenges of model railroading is replicating the operating practices of our chosen prototypes. With a basic understanding of unit trains we can head trackside only to see a train of solid tank cars with a single covered hopper on one or sometimes both ends. So is this still a “unit train?” The answer it that indeed it is, and that odd car is a necessary part of the “unit,” mandated by Federal Railway Administration rules acting as buffers separating the locomotive and its operating crew from the tank cars full of hazardous cargo.

As standard practice on ethanol and crude oil trains, current rules specify that a buffer car consisting of a boxcar, covered hopper, gondola or tank car of at least 45 feet and not greater than 75 feet separates the power and loads. It also must be loaded with a non-hazardous inert material that will not shift and the gross weight of the designated buffer car must be a minimum of 45 tons.

While at one time any non-placarded car such as a random boxcar would suffice, these modernized regulations now include weight standards and have led to a preference for pools of dedicated cars, most commonly older covered hoppers pulled from revenue service. Loaded with material such as rock or sand then sealed with their hatches and discharge gates permanently shut, these modified cars provide a buffer that separates the locomotives from the loads while remaining heavy enough to remain stable despite any slack run in.

Now that we have a basic understanding of what a buffer car is, why should we model them? After all, our models are certainly not subjected to the same physics as our full-scale counterparts; and an incident involving a “hazardous” train on our layouts can usually be handled within minutes. Well, two answers spring immediately to mind, the first being operation. Much like the caboose required extra moves and special handling, we can enhance our operations while retaining prototype fidelity. 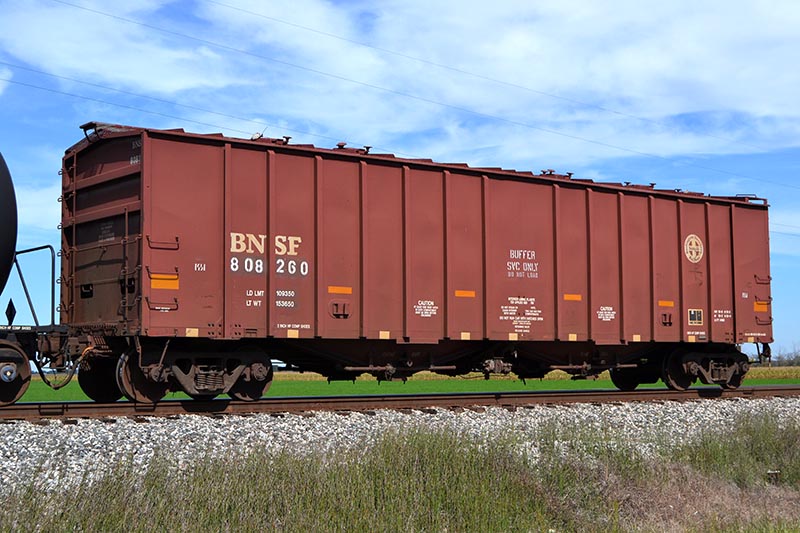 ABOVE: This BNSF Railway buffer car features patched renumbering but the “buffer” notice on this car was done with large stencil lettering, making it more visible. A careful eye will also pick out the small “MW” designation to the left of the car number short for “Maintenance of Way,” another indicator that this is no longer a revenue car.

For example, adding rear end helpers or Distributed Power Units (DPUs) to the rear requires a second buffer to separate the additional power from the loads. Similarly, if a runaround move is required to spot the train upon arrival, the crew can’t tie onto the rear without the proper car there. Both of these reasons are why we commonly see a buffer bringing up the rear of a train even though there may not be anything but air beyond the rear car.

The second is that buffers provide an opportunity to add a new class of car to our rosters while requiring very little actual work. Visible evidence of rolling stock converted to non-revenue buffer service includes renumbering, reweighing and additional markings making clear that the car has but one specific purpose. Commonly this is done without a repaint of the car, utilizing only stencil painting or vinyl patches, leaving the overall revenue scheme intact. This enables us to use a factory-decorated model as a starting point, saving valuable modeling time.

I’ll show you how I made several buffer cars replicating those found on BNSF Railway and Norfolk Southern, in addition to creating a car for the proto-freelanced Chesapeake, Wheeling & Erie, all in the course of an evening or two…

Read the rest of this article in the November 2021 issue of Railroad Model Craftsman. Subscribe Today!