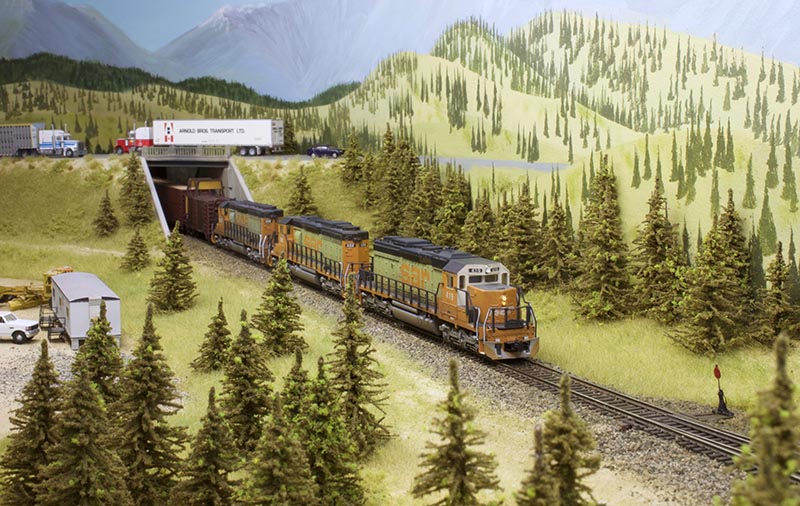 Three SD40-2s slow to a stop at WSS Burmis with the Nelson to Lethbridge (Nelly) manifest in tow on Grant Eastman’s N scale Southern Alberta Rail. Having picked up lime loads at Sentinel, the train will lift log loads at Burmis and continue eastbound to Fort Macleod. This train can take up to three hours to complete its work across the layout.

By Grant Eastmam/photos by the author

Straddling the border of southern Alberta and British Columbia lies Crowsnest Pass. A hidden treasure for the rail enthusiast that is overshadowed by Canadian Pacific’s Rogers Pass to the north and BNSF Railway’s Marias Pass to the south, the area is full of natural beauty and an abundance of interesting rail traffic. Bulk commodities from western Canada such as grain, potash, and crude oil heading for Portland, Ore., traverse westbound across the pass regularly. Unit coal trains can sometimes be seen heading east as well as manifest traffic in both directions. As a rookie trucker back in the late 1980s crossing the pass back and forth several times a week, I came to fall in love with the area. Union Pacific SD40-2s, specifically equipped to run in Canada, could be seen in pool service alongside traditional Action Red CP power. I knew that when the time came for a layout the “Crow” would be what I modeled.

Throughout my teen years my dad and I had been avid HO modelers dabbling with the concept of a modern regional railroad called the Southern Alberta Rail (SAR). The premise was, CP had spun off some secondary lines and they were purchased by a new operator. Locomotives were painted in various liveries but with no available space for a layout they languished on display shelves collecting dust. With a switch to N scale and the purchase of my first house in 1992, that would soon change. Southern Alberta Rail would become a reality, featuring the spectacular railroading set in Crowsnest Pass. 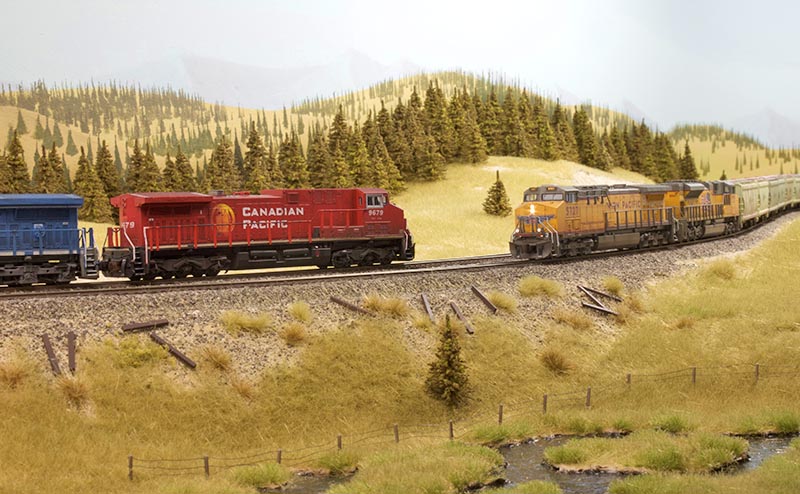 ABOVE: It can be hard to tell whose railroad this is at times. Canpotex hoppers follow Union Pacific 5727 and a UP SD70ACe over ESS Burmis. Canadian Pacific 9532 waits patiently in the siding for its turn to drop downgrade.

Single at the time and with no one to answer to, my dad and I jumped headlong into construction with little planning, just a strong desire to finally see something running. Holes were cut through walls, toilet tanks crossed, and a laundry room tamed. Trains were soon running but, as our experience in the hobby grew, it became apparent that just running trains was not enough.

Operations became an interest and the layout was expanded several times over the years to meet our evolving tastes. Each addition briefly added to the enjoyment of the layout but we were just putting lipstick on a pig at that point, covering over the parts we were never happy with. Essentials such as staging yards and industry were all afterthoughts. Armed with the knowledge gained from our earlier experience, the decision was made to build a new layout from the ground up. 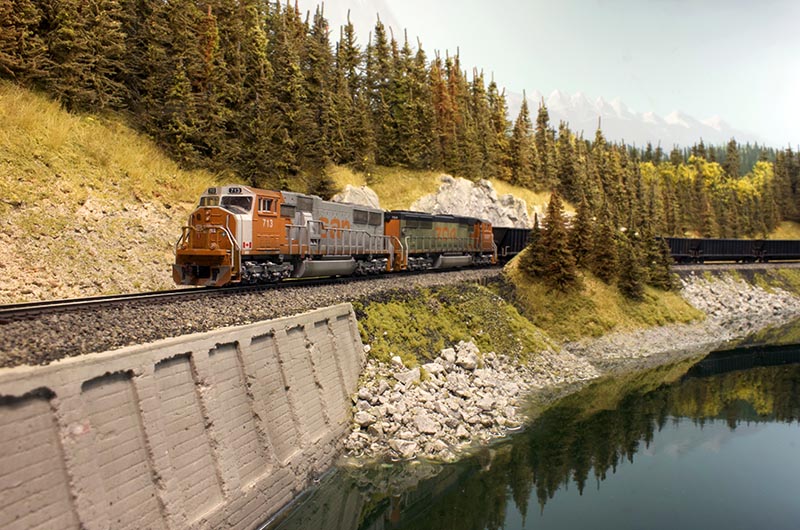 ABOVE: Approaching the border of British Columbia and Alberta, SAR 713 west reflects on the still waters of Island Lake.

A railfanning trip to Montana in October 2001 would greatly influence the new design. Parked on the side of the frontage road somewhere between Belgrade and Bozeman, Mont., I witnessed my first manned helpers in operation. An eastbound BNSF manifest thundered toward Bozeman Pass, with a five-unit set of Montana Rail Link EMDs tucked into the middle of the train. The fourth helper unit was an ex-Burlington Northern F45, another first for me. I was hooked! That’s when I knew what the new layout was going to be: demonstrating the struggle between drawbar tonnage and gradient. Upon returning home I wrote an article documenting the old layout (Mar/Apr 2002 N Scale Railroading) and then tore it down.

Design and Concept
Planning for the new SAR layout began with a list of “must-haves.” These included large reverse loop staging yards at each end to allow trains to reposition themselves between operating sessions, and a generous 32” minimum radius on the main line with long sections of single track and long passing sidings to accommodate 48-plus car trains. Manned pusher (Canadian for “helper”) operations were to be the focus of the new layout and a double-deck design was agreed upon. Construction on the new layout began in December 2001…

Read the rest of this article in the November 2021 issue of Railroad Model Craftsman. Subscribe today!