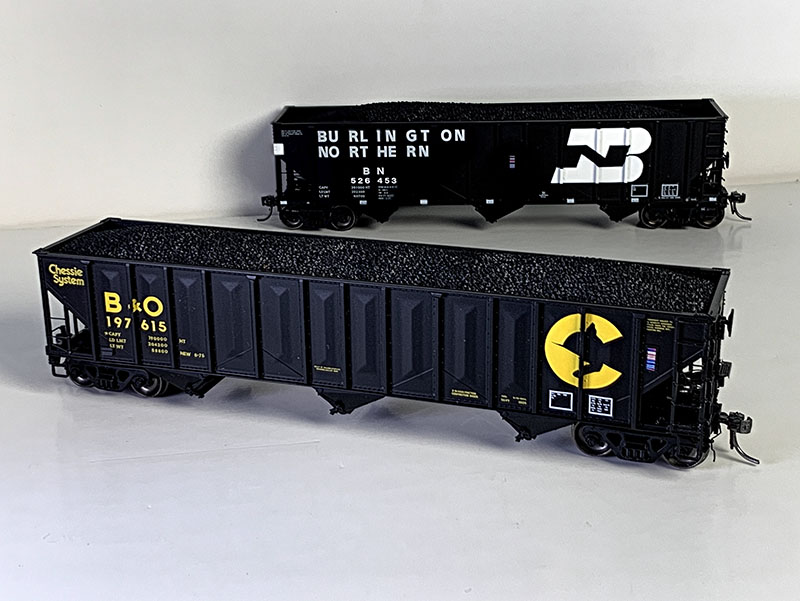 Tangent’s new family of Pullman-Standard 100-ton 3-Bay Hoppers include a PS3526 HT for B&O and a PS4000 HT for Burlington Northern.

For many railroads in North America and elsewhere, coal has been their lifeblood, not merely as fuel for many of their steam locomotives, but also as a major, if not primary source of traffic and revenue over the years. The transport of coal by rail has been accomplished in many ways, including various styles of closed-bottom gondola designs but also from open-top hopper cars, in which the lading can be discharged through a number of gates located on the bottom sides of each car.

On November 1, Tangent Scale Models introduced an all-new family of highly-detailed HO scale ‘modern’ 3-bay 100-ton coal hopper models.  These all-new models represent the most significant designs of these hoppers constructed by Pullman-Standard between 1974 and 1981.  Three basic car capacities are offered in this family – 3526, 3600 and 4000 cubic feet. Eastern roads purchased the 3526 and 3600 cubic foot hoppers which had shorter sides to accommodate denser Eastern coal, while western and midwestern customers purchased the tall-sided 4000 cubic foot versions. 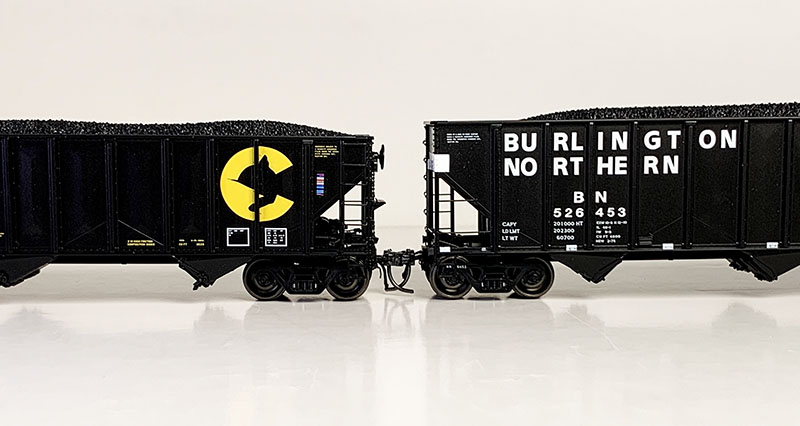 We received two cars for this product review – a PS3526 HT “low-sided” car wearing an as-delivered scheme for B&O/Chessie System, and a PS4000 HT “high-sided” car for Burlington Northern representing cars delivered in 1974 to the BN.  Side-by-side, the two cars are surprisingly different at first glance even to casual observers due to the differences in side panel height. However, side panel height is where the differences only begin for this family of cars. Looking a little deeper, depending on the prototype being depicted, differences include a choice of flat or P-S’s signature “trapezoidal” indentations on the side panels, different end and corner ladder configurations, low or high-mounted brake wheel assemblies and much more.  In fact, there are two different styles of trapezoidal panel indentations, to just keep things interesting between the “Western” and “Eastern” cars.  However, those are just some of the most visible differences.  Regardless of the options, phases and variations, all cars, whether 3526, 3600 or 4000 HTs share the same 40 foot, six-inch distance between truck centers, but vary in the length of the body due to the production phase or owner requirements. These differences in actual body length are much more subtle and harder to catch but are unforgettable once you notice it.

All said, Tangent has taken extraordinary lengths for accuracy by tooling up a total of five different body shells to cover the most statistically relevant members of this varied car family.

Our first sample represents B&O 197615, a car finished for Chessie System bearing the reporting marks of the Baltimore & Ohio Railroad. This model is an excellent representation of “Eastern” hoppers of 3,526 cubic foot capacity – one of a large group of 2,500 PS3526 HTs delivered to this Eastern coal hauler between July and October 1975.  As this model sits on the rails, one cannot help but notice the nicely rendered trapezoidal indentations that bulge outward on each body panel on this car – a signature feature of this Pullman-Standard car family… 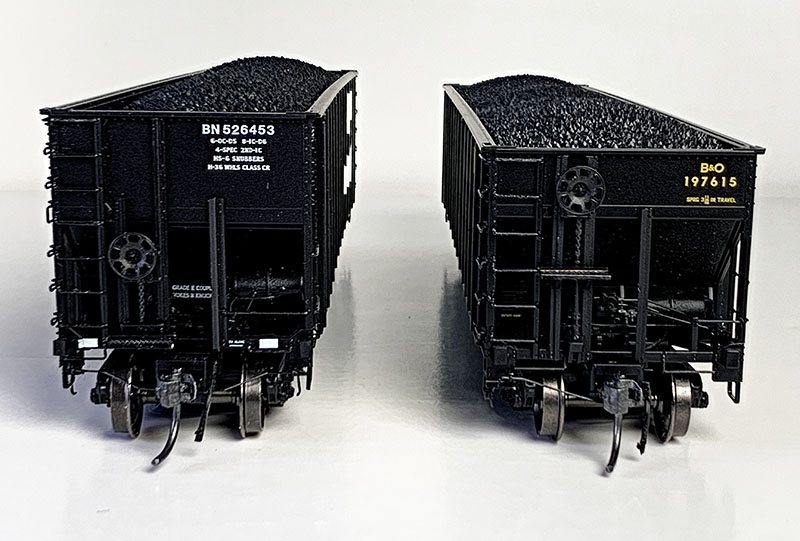