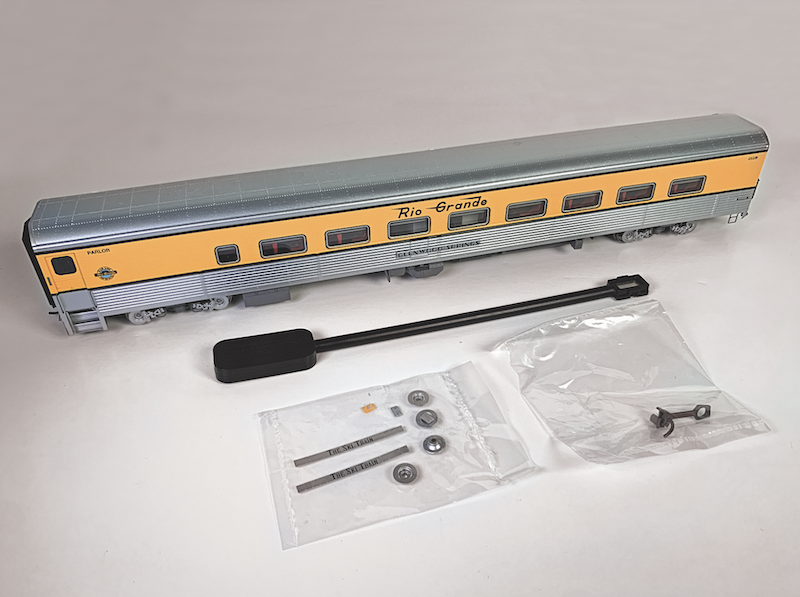 Included with each Rapido Ski Train car is a long-shank metal coupler, extra disc brake rotors, additional nameplates, a sheet of decals and a magnetic wand.

Since 1940, the Denver & Rio Grande Western Railroad, later in collaboration with associated entities, provided passenger service to skiers between Denver’s Union Station and the resort at Winter Park, Colorado, on the west side of Moffat Tunnel.  Traversing a 56-mile route up the eastern slope of the Rocky Mountain range in Colorado, “The Ski Train” as it was popularly known, brought skiers from the city to the slopes on winter weekends between December and March. At Winter Park, the train delivered skiers to within 100 yards of the ski lifts. The Ski Train operated for decades with heavyweight steam-heated passenger equipment from the D&RGW right into the 1980s. In 1987, the train changed ownership and the new owner instituted a number of improvements to the service. Most apparent was the acquisition and subsequent refurbishment of more modern equipment – former ‘Tempo’ passenger cars from Canada’s VIA Rail.

These modern-looking passenger cars were originally constructed for the Canadian National Railway in 1968 by Hawker-Siddeley for CN’s new ‘Tempo’ passenger trains.  The ‘Tempo cars’ were the first equipment on the Canadian National to rely upon electric Head End Power (HEP) to provide heat, lighting and air conditioning while also utilizing aluminum construction.  The cars served faithfully for nearly twenty years before a group of them migrated south to the US for the Rio Grande Ski Train. This same Tempo equipment is now back in Canada, but serving on the Agawa Canyon Tour train over the former Algoma Central.

For their first release back in 2019, Rapido delivered HO scale models of Tempo passenger cars for CN and VIA Rail. Rapido has recently issued an all-new production of these cars in the classic D&RGW Aspen gold, silver and black colors for the Rio Grande Ski Train. Ensuring accuracy, Rapido also has created new tooling for this project with a new snack coach body shell which replicates the blanked windows as seen on the snack coaches on this train. Soon to follow later this year from Rapido are the three matching F40PHs in Rio Grande Ski Train paint.

Glenwood Springs was a Parlor/Club car on the Rio Grande Ski Train from 1988 until the 2000s.

In this review, we will examine samples of the four different types of Tempo cars that served on the Ski Train – the coaches, the parlor/club cars, the cafe/bar/lounge cars and the snack coaches. The cars are available both as three-car sets and singles. Each set consists of a coach, a parlor/club car and a cafe-bar-lounge car. There are three different 3-car sets, each with different car names.  Single packs are available for the snack coaches and for the remaining coaches. The third three-car set was commissioned and sold exclusively by Spring Creek Model Trains. Fourteen different cars are available so that modelers can replicate the entire trainset.

As they say, first impressions count, and the packaging sets a high bar. Each car arrives in a glossy box emblazoned in D&RGW colors and lettering style. All three boxes in the three-car sets are enclosed together within a giant dust sleeve featuring full-color images of the Rio Grande Ski Train in action.  Once removed from the packaging, each car weighs a healthy 7.6 ounces, 0.9 ounces over NMRA’s Recommended Practice 20.1 for HO scale cars of this length. In our experiences so far, this slight excess in weight has proven to be a positive attribute for reliable operation on these cars.  All wheels that we tested on these cars were found to be in compliance with our NMRA Standards Gauge. Included with each car is a long-shank metal coupler, extra disc brake rotors, additional nameplates, a sheet of decals and a magnetic wand. 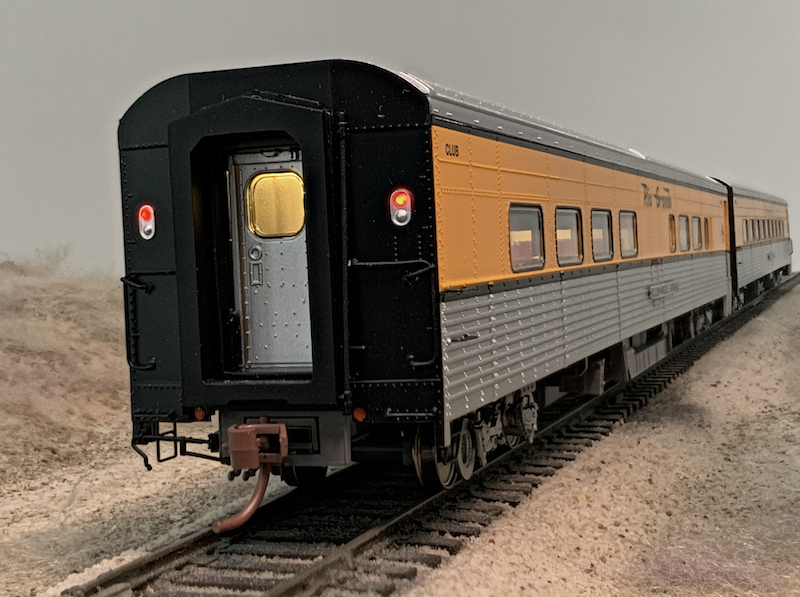 A look at the rear end of one of Rapido’s new Rio Grande Ski Train cars and its markers.

As decorated out of the box, the models accurately depict the Ski Train Cars from the time they entered service in 1988 through the early 1990s.  Decals for the later Ski Train herald, car names and Amtrak road numbers along with a pair of extra name plates are provided with each car so that modelers can replicate the train as it appeared between the mid-1990s and 2000s.

Rapido has developed a sterling reputation for providing an extremely high level of fidelity and detail that began with its passenger cars.  These cars serve to build on that reputation by exhibiting a host of finely executed details on every visible surface of these models…

The third three-car set is offered exclusively from Spring Creek Model Trains for $329.95/set via www.springcreekmodeltrains.com.