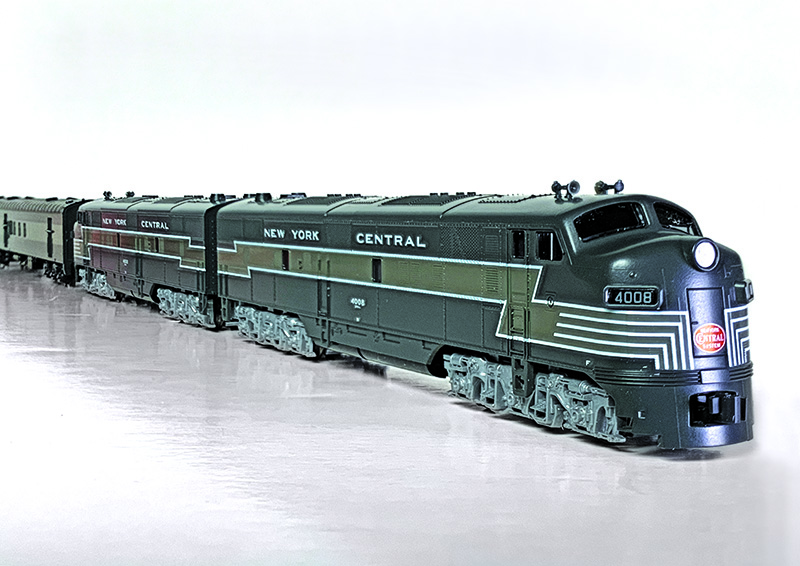 At its peak, New York Central operated more than 28,000 miles of track serving eleven states and two Canadian provinces, as its famous “Water Level Route” main line connected New York with Chicago and the Midwest. In 1902, the railroad launched its all-new 20th Century Limited operating on a fast overnight schedule between Grand Central Terminal in New York City and LaSalle Street Station in Chicago. The new train captured the American public’s imagination with its luxurious accommodations and exclusive services that attracted a combination of business leaders and famous movie stars, further elevating the train’s celebrity status.

Initially operated with heavyweight passenger cars, the train took on an entirely new look in 1938, relaunching with streamlined lightweight equipment in a classy art deco motif styled by noted industrial designer Henry Dreyfuss. The new train was pulled by streamlined J3a 4-6-4 Hudsons that are remembered today as an icon of streamliner design. After World War Two, the railroad refreshed its flagship yet again in 1948 with all-new cars from Pullman, supplemented by refurbished 4-4-2 sleepers and mail cars from the 1938 train. Steam power was replaced by sleek E7 diesels from Electro-Motive. Painted in an updated version of NYC’s two-tone gray scheme, sleepers and observations were named for various bodies of water in a salute to the “Water Level Route” by which the railroad was known. The matched sets of EMD E7s delivered 4,000 horsepower to meet the demanding 16-hour schedule. After 65 years of operation, the Century made its last run on December 2, 1967.

Continuing its celebration of America’s finest passenger trains, Kato USA recently released the 1948-1954 edition of New York Central’s 20th Century Limited Streamliner for N scale. Unlike typical offerings in which somewhat similar stand-in cars are left to suffice, Kato made a significant investment to create all-new tooling to precisely replicate each of the unique car designs as seen on this postwar edition of the 20th Century Limited. In this production, Kato offers a nine-car basic set, along with a four-car add-on set. Included with this release are matching EMD E7 diesels decorated in the classic NYC two-tone gray “lightning stripe” livery. All together, Kato provides enough equipment for a 13-car consist with two E7A diesels.

One of the dining cars that come with Kato’s new N scale 20th Century Limited.

The nine-car set includes the following cars – Baggage-RPO #5017 riding on six-wheel trucks, 4-4-2 Sleeper “George Washington Bridge,” 4-4-2 Sleeper “Bay Bridge,” 4-4-2 Sleeper “Queensboro Bridge,” Club Lounge “Lake Shore,” Kitchen-Dormitory 474, Diner 401, 12-bedroom Sleeper “Port of Buffalo,” and Five-bedroom Lounge-Observation “Hickory Creek.” Each car replicates the precise window and door arrangements true to the 1948-54 edition of the 20th Century Limited. Of special note are the kitchen-dormitory, diner and observation cars on this train. Most railroads found a single dining car to be sufficient; however, for this train, the NYC specified a dedicated kitchen-dormitory car to be paired with an all-seat diner with capacity for 68 passengers. With its especially tall windows in the lounge area, the “Creek”-series Lounge Observation car was also a signature feature of the 1948 edition of the 20th Century Limited, now crisply rendered in scale by Kato. For the first time for any model, the RPO has the correct roof vent configuration as updated for the 1948 train. Fans can rejoice that these cars are finally available in an accurate form to reproduce this great train in N scale.

For modelers looking to go the full distance in reproducing the complete consist, Kato provides an add-on set for the Century that consists of two additional 4-4-2 sleepers and two additional 10-6 sleeping cars, resulting in a 13-car consist, just two cars shy of a 15-car consist for this train typical in 1950. The fifteen cars can be achieved by procuring a second NYC add-on four-car set, but will result in duplicate car names. However, all is not lost, as beginning in 1946, ATSF and NYC offered run-through service so that coast-to-coast passengers wouldn’t need to change trains at Chicago. Santa Fe cars went east on the Century, while New York Central 4-4-2 “Bridge” and 10-6 “River”-series sleepers went west on the Chief. For modelers who wish to reproduce this service, Kato has also produced Santa Fe sleepers as part of its “Super Chief Add-on Set 106-6003” back in 2019. Adding an ATSF 4-4-2 and ATSF 10-6 sleeper from this ATSF set to your 20th Century Limited should suffice for this service, and will bring your consist to a full 15 cars. Conversely, Western modelers operating Santa Fe’s Super Chief should consider purchasing Kato’s “Add-on Set” of sleepers from the Century to use on the Chief between Chicago and Los Angeles. The use of either NYC or Santa Fe cars alternated seasonally on these two name trains.

As with most trains, the number of sleeping cars in a consist fluctuated with seasonal demand. In fact, the Century often ran in several sections to accommodate additional passengers during peak travel periods.

Out of their boxes, we found the paint and lettering on each passenger car and locomotive to be crisply applied and opaque with accurate color rendition to this reviewer’s eyes. The plastic window panes are clear, with pad-printed bright metallic window gaskets. Other than the optional magnetic trip pins supplied in tiny plastic baggies, there are no optional or additional parts to be applied by the customer. 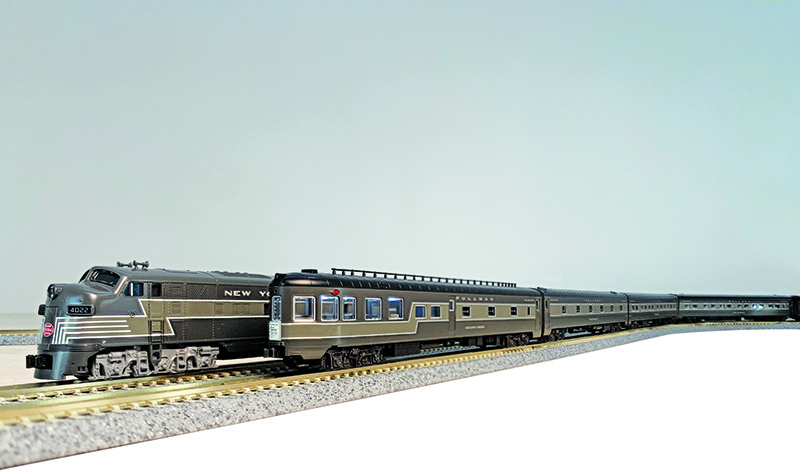 Lighting: Straight from the box, with the exception of the lighted observation car, each passenger car is provided unlighted. Kato offers a separately available 11-211 LED passenger car lighting kit to provide illumination for those who desire. The lounge-observation car comes standard with interior illumination of the rear lounge area, along with a beautiful illuminated tail sign and operating red rear marker lights. The cars snap apart easily to install lighting.

The E7A locomotives are equipped with a single forward headlight, and feature all-new road-specific tooling that captures the unique side grille modifications made to NYC’s E7As to provide increased cooling on the prototype. Under operation, the LED headlight and number boards are directionally illuminated in the forward direction, and off in reverse. Our sample E7s were provided and tested as DC locomotives. Each locomotive has a can motor and dual brass flywheels driving all wheels. Train Control Systems K0D8-G and Digitrax DN163K0D drop-in boards are recommended for operation under DCC.

The 4-4-2 Sleeper “George Washington Bridge” is one of the cars included in the set.

Operation: We tested the entire thirteen-car train on our N scale test layout. To get the cars on the rails, Kato has thoughtfully provided its customary rerailing tool, but this time with a little bit of extra panache. For this set, the rerailing tool is molded in crimson red with 20th Century Limited branding, echoing the famous red carpet that was rolled out on the station platforms next to the real train daily at Grand Central Terminal. For your layout or display diorama, Kato also offers a limited edition version of its passenger platform with the Century’s signature red carpet printed on each section.

Once on the rails, the locomotives and passenger cars all performed flawlessly with smooth and quiet operation at all speeds under DC control as expected. No issues were noted. Individually, each passenger car rolled freely down the rails with nearly zero resistance. Each car weighs 1.125 ounces, somewhat under the 1.45 ounces recommended by the NMRA for cars of this length. All passenger cars and locomotives in this review have factory-installed metal wheels. One Kato E7A was sufficient to pull the thirteen-car train at any speed over level terrain without slipping. With truck-mounted couplers, the train operated on 11” and 12.75” radius curves without incident.

The observation car Hickory Creek brings up the rear of this N scale train.

Out of the box, the models are all equipped with Kato’s proprietary working knuckle coupler, which provides smooth and easy coupling and uncoupling operations. For those who prefer Micro-Trains couplers, Micro-Trains recommends its MTL 2000 conversion kit for the E7As, while MTL 1129 (medium shank) or MTL 1130 (long shank) are suggested for these smooth-sided passenger cars. With the exceptions of the rear coupler on the observation car, and the front pilots of the E7 locomotives which are body-mounted, all couplers and draft gear on all of the passenger cars and locomotives are mounted “Talgo-style” to the trucks allowing for operation on tighter radius curves.

This 20th Century Limited N scale passenger train is a beautiful high-quality offering not only for New York Central fans, but also admirers of classic American streamliners in any scale. Kato’s add-on set of NYC sleepers in this production also makes it possible for Santa Fe modelers to recreate the through-sleeper service shared between NYC’s 20th Century Limited and ATSF’s Super Chief.

This review appeared in the February 2021 issue of Railroad Model Craftsman! Subscribe today!