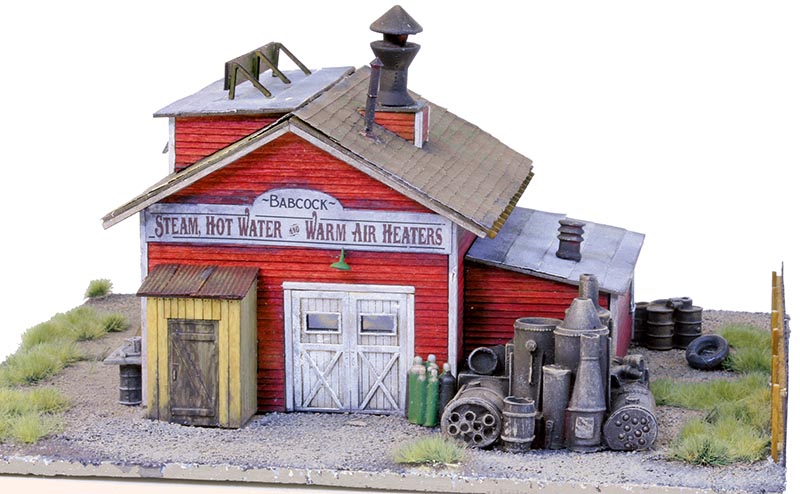 Babcock Boiler Works is representative of one of the many run-down structures that time seems to have bypassed. Like nearly all of Bar Mills’ kits, this one builds into not just a model building, but an entire detailed scene. The only item not included in the model aside from figures and vehicles is a base with some dirt, gravel and grass. The builder should source materials for the base before starting the build, since the main structure and all of the details will be attached to it during construction. I created a base measuring about 6” by 8” from an off-cut of 1/8”-thick craft plywood.

The main structure is made of precut basswood and card stock, sheet strip wood and injection-molded windows and doors. Material for bracing the interior walls is included that makes for construction of a rigid carcass onto which various roofing, doors and windows are added. Laser-cut adhesive-backed shingle and roll roofing strips are used to cover the main structure roofs, while corrugated paper stock covers the awnings on the loading dock and ground level front weather entry. Innovative laser-cut one-piece rafter tail sheets take the challenge out of adding these details to the roof edges, adding to level of detail found in this model. 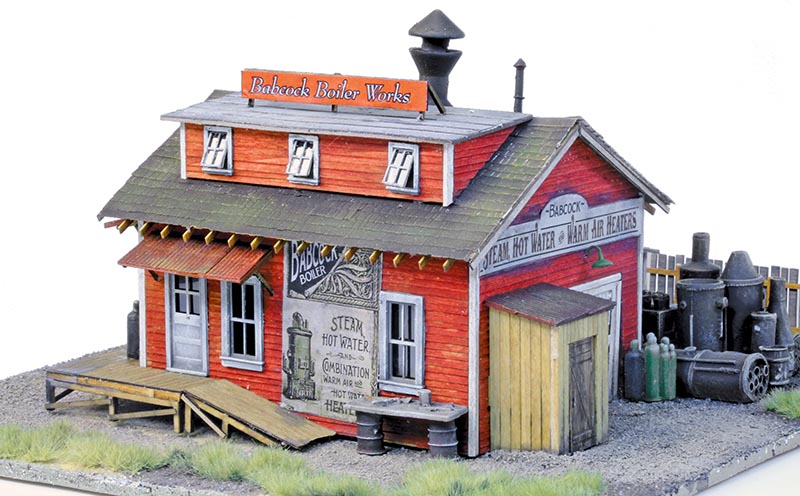 Included with the kit is a pack of resin and die-cast metal detail parts, the centerpiece of which represents a large group of derelict boilers and other metal scrap. This is the type of junk that seems to populate long-running businesses where little is discarded or wasted. The large casting, once washed, primed and painted, is the anchor point of the scene. The assorted welding gas tanks, workbench, crates and barrels flesh out the additional details. Metal roof vents and stacks added to the roof provide visual interest to the architecturally unassuming main structure. 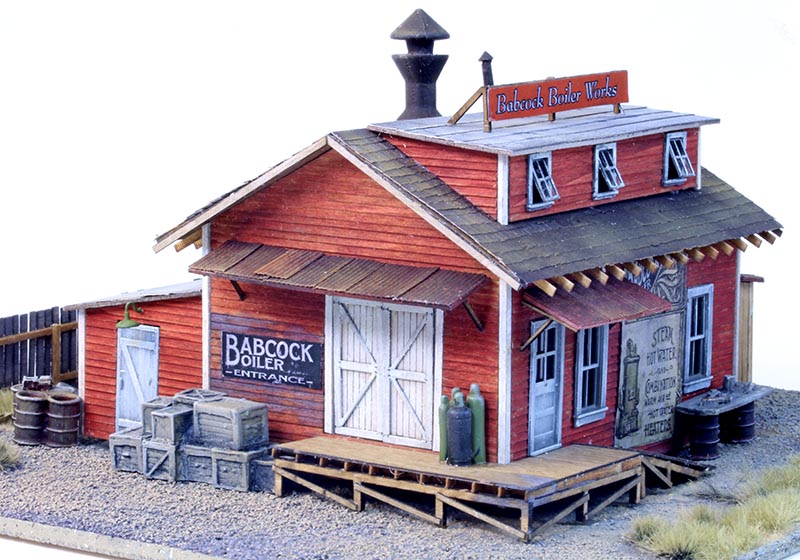 Finishing each of the pieces was done prior to assembly. The walls and loading dock were pre-stained with a base color, with the walls having a second color stain added. This technique has been frequently used to capture the failing paint and overall decay of older buildings. The wood doors and trim were first stained with a wood tone color, then overstained with a white pickling stain. The plastic windows and doors were primed with gray spray primer then stained with the same white stain. The shingles and roll roofing were sprayed with an appropriate flat color, then dry brushed once they were in place on the roof. Likewise, the corrugated awnings received a multi-color rusty treatment similar to that applied to the junk pile.

Paper signs were cut from the instruction sheet and their backs were sanded to thin them before being attached to the main building with white glue. Once dry, they received a wash of dark alcohol stain to tone down their colors and blend them to the building. This step completed construction, leaving only placing the main structure and the various details on the scenicked base. A row of included fencing added to one edge of the base completed the scene.

Bar Mills positions this kit in their Advanced Kit line which is aimed at builders with a medium skill level. This shouldn’t discourage anyone from trying the model since construction was straightforward and remarkably easy using the concise provided instructions. The higher skills required are in the finishing and weathering of the building and its details. The end result is a scene that captures the industrial decay of a homegrown repair company. When complete, the finished scene is suitable as the centerpiece of any display or layout.

This review appeared in the October 2020 issue of Railroad Model Craftsman! Subscribe today!