Jacksonville Terminal Company has become well-known in N scale circles for its extensive line of highly-detailed intermodal containers and supporting equipment. They have now released their first piece of N scale rolling stock – a single-well standalone double stack intermodal well car representing TTX class NWF13A. TTX received 1,100 cars of this design from National Steel Car between 2005 and 2006. These cars are assigned to the number series DTTX 680090-681189 and are a common sight throughout North America.

The feature that distinguishes the NWF13A from similar designs is that there are only nine vertical posts along the side sill of these cars, whereas comparable stack cars have almost twice as many side posts for the same dimensions. With only nine side posts, the car presents a smoother appearance compared to many of its peers. 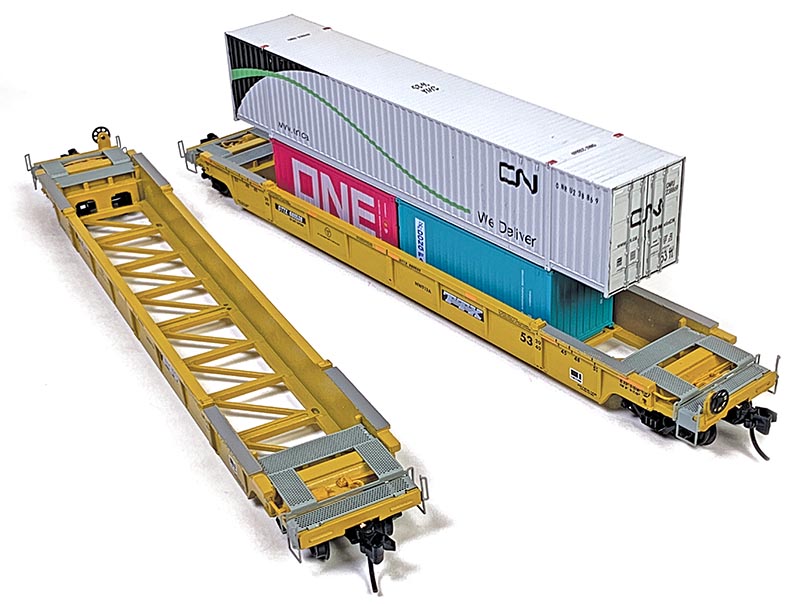 For this inaugural production, Jacksonville Terminal Company is offering its NWF13A finished in the 1991+ version TTX logo with a black rectangle and speed lettering. Five different road numbers are available. For those curious, examples of this NWF13A class with the newer red TTX “Pennsylvania Heritage” logo are still exceedingly rare as of this writing.

The car arrives packaged in a customary plastic jewel box that includes a separate clear plastic lid. Straight from the box, the model comes fully assembled and ready-to-roll. However, we noticed that the vertical end railings arrived slightly bent from shipping. With a slight bit of finger pressure, I was able to straighten the handrail posts back into position without incident. JTC is aware of this issue, and is happy to replace any walkway assemblies for free for any customers that need them. JTC has since made packaging improvements for their future releases. The saving grace is that these etched metal parts are designed to stand up to casual handling and adjustment, yet provide a fine scale appearance. 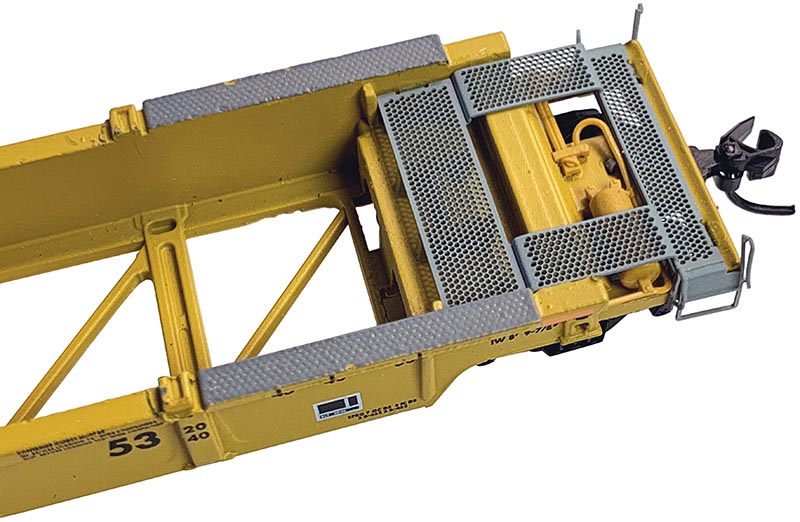 Out of the box, my eyes were immediately drawn to the beautifully etched see-through metal walkways atop the decks. Unlike other offerings even in larger scales, these metal walkways are finished in a flat gray that performs an excellent job of representing the actual walkway material as it appears on these cars after a few months on the rails—a truly realistic touch. In contrast, the thin metal catwalks between the 53-foot and 40-foot stacking post locations are cast as part of the main car body, likely for durability reasons.

Additional details include container guides at the 40-foot stacking post locations and separately applied deck mounted air brake equipment with finely executed brake lines. The vertical grab irons and stirrup steps are delivered in gray, likely due to manufacturing constraints. For those who desire, this can easily be remedied with a quick touch-up of yellow paint applied carefully with a fine brush. On our samples, all lettering and markings are crisply applied with accurate registration and alignment even under magnification…

Read the rest of this review in the October 2020 issue of Railroad Model Craftsman! Subscribe today!