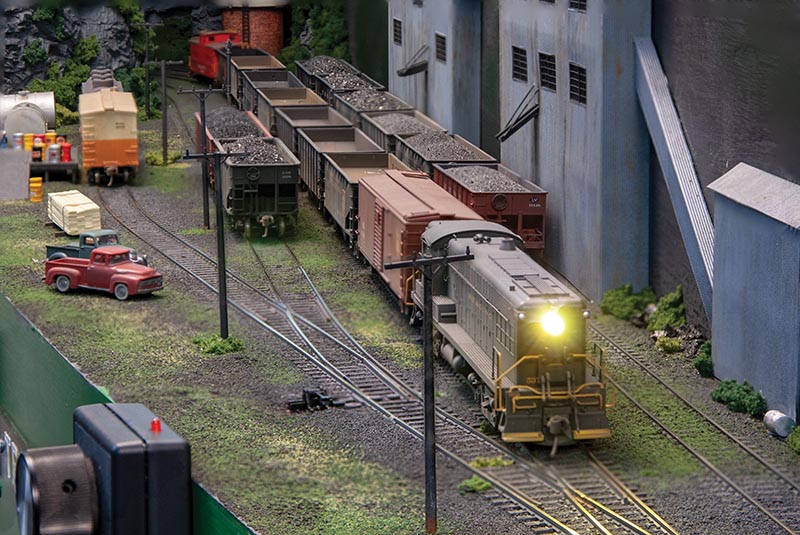 he Stevens Crew passes loaded hoppers as it arrives at the Stevens Coal Company loaders near Trevorton, Pennsylvania. The entire scene is only 13 inches wide, but provides ample switching moves. The pace is more relaxed than being out on the main line. 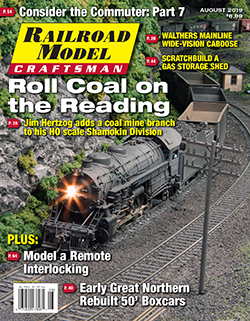 During a typical monthly operating session approximately 40 trains are run on my HO-scale Reading Railroad Shamokin Division. About half are symbol freights and passenger trains with the balance being mine runs, coal extras, and interchange traffic. Until recently one of the least preferred assignments on my layout was being called for the Stevens Crew. This short coal train simply ran from nearby Newberry Junction staging (representing the Stevens Coal Co.) to Shamokin Yard, a run of about twenty feet. Upon arrival at the yard the loaded hoppers would be set out and the power went to the engine house.

After hearing some occasional grumbling from the crews, I considered eliminating the train from the schedule; however it did serve a purpose of delivering coal loads needed for filling out tonnage on a later coal extra.

For the past few years, I had considered my layout essentially complete, with no further room for any expansion. However, one evening during restaging, I was drawn to the only vacant space left in my basement. An inner stair wall, about eight feet in length, was basically a blank canvas, except for displaying a Reading System map and several throttle holders. I concluded that this space could be converted into yet another coal loading area and could greatly expand upon the work required by the Stevens Crew. The new assignment would be a turn with the crew running from Shamokin to the Stevens Coal loader and return. 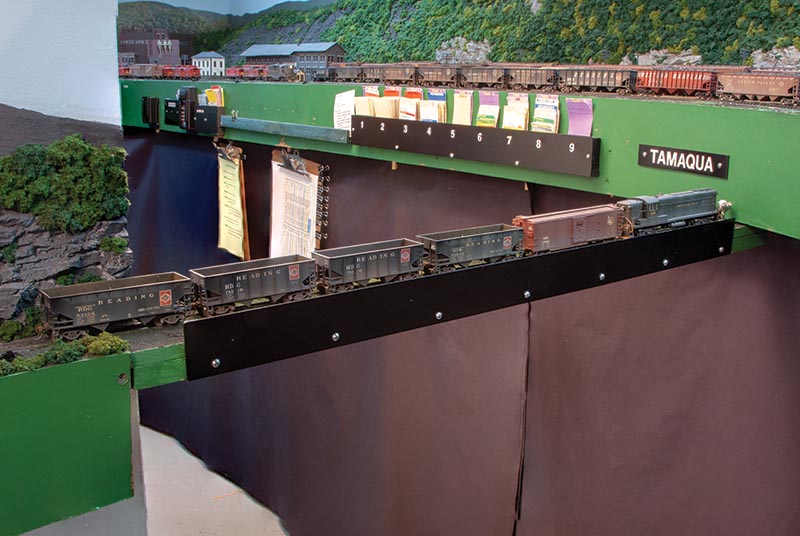 Vital to the branchline mine operation is the hinged drop gate. When raised, the gate effectively holds a locomotive and five cars. Multiple moves are required to perform all the switching and runaround moves needed at Trevorton. When raised, a simple four-inch carriage bolt is placed through an eye bolt and into the fascia holding the gate securely in place. The gate spans the aisle at the very busy Tamaqua yard, but interference with the east and west yard crews has been minimal.

The designated area was located next to the basement water heater with only seven inches of clearance between the wall and the heater. After taking some measurements, I concluded that, by cutting through the back wall of the Newberry staging track and extending the rear staging area, I could fit in a three-track yard and even a spur for company supplies. This would provide some necessary switching, while not interfering with aisle space of the adjacent and extremely active Tamaqua yard.

Squeezing three tracks between the water heater and the wall would require a tight minimum track radius of 17 inches; not ideal, but since road power would be limited to 4 axle diesels or small 2-8-0 steam power, this would work. Subroadbed would use a 1×6” and a 1×8” pine board overlaid with Homasote and fastened to the wall with formed angles. I would also need to fabricate some thin building flats to represent the coal loaders, add an unloading platform, and a pair of fuel storage tanks…

Read the rest of this article in the August 2019 issue of Railroad Model Craftsman!