A Lehigh Valleyswitcher pulls loaded tank cars from Olson Refining in Jersey City, while two RS-11s lead a transfer freight on the main line. The Seneca Valley Lines is the HO scale home road of the Rochester Model Railroad Club. 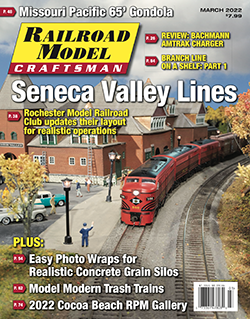 Formed in 1939 as the Kodak City Model Railroad Club (named for the primary employer in town), the Rochester Model Railroad Club has been reincarnated at least six times over the last 83 years. Each time the club was forced to move to a new location, and each time the new layout was an improvement over its predecessor. Founded in the basement of a radio and electronics store, the club grew quickly and sought larger quarters. In 1943, the club rented space in the former Buffalo, Rochester & Pittsburgh Railway office building on Main Street, which lasted for six years. This was followed by occupying space in the back of a nearby toy store. Another move in 1957 brought the club back to Main Street and into the old Pennsylvania Railroad freight house, but this only lasted until 1961. The club then moved downtown to a space on South Avenue until 1979 when the property was sold to make way for a new convention center. This was followed by a move into space rented from a neighborhood Elks Club. In 1983, the group reorganized as a non-profit and renamed itself the Rochester Model Railroad Club, and in 1989 the club moved to its current location in the basement of the First Universalist Church in downtown Rochester, New York.

Today, the club has 44 active members ranging in age from teens to seniors. The club’s longevity undoubtedly can be ascribed to a membership that has always delighted in creating and building, while making improvements along the way to incorporate the latest methods and techniques. 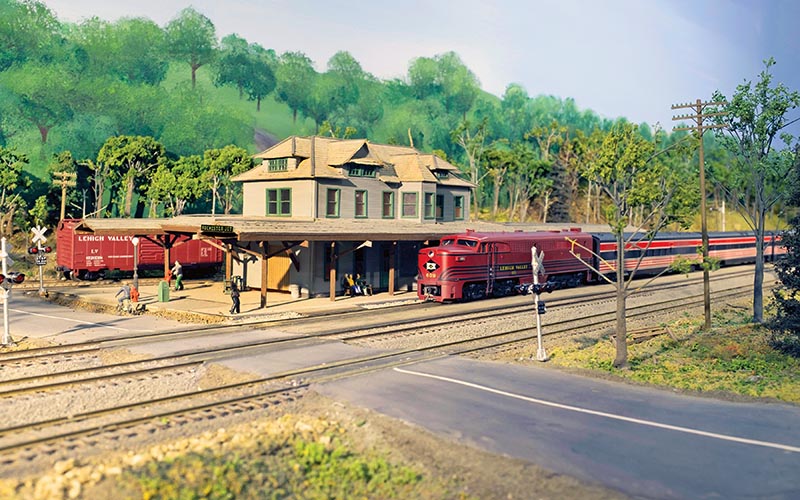 ABOVE: The westbound Black Diamond will make a brief stop at Rochester Junction as it makes its way toward Buffalo.

Design and Concept
The current Seneca Valley Lines layout began with an entirely new design intended to take full advantage of the 40×60’ foot space in the church basement. The previous layout at the Elks Club was a “spaghetti bowl” design typical of clubs of the day, with the cab controls located both in a loft and in the center of the room. By contrast, the current layout employs a walk-around design to allow more realistic scenes to be built. In addition, wide aisles were desired to accommodate large numbers of open house guests. Some prized components from previous layouts were incorporated into the new design, including the trolley line which operates from live overhead wire, and the large scratchbuilt truss bridge that spans the harbor at Jersey City.

The Seneca Valley Lines is based on the former Lehigh Valley Railroad as it ran from Jersey City, N.J., through the anthracite region of northeast Pennsylvania, the rolling hills of western New York, and finally on to Buffalo. In addition to the many industries along the right-of-way, there is a branch line that climbs into the coal mining hills of Pennsylvania and an interurban trolley line that runs westward from Jersey City. While the layout appears to be point-to-point, the staging yards housed in a separate room facilitate continuous running, an important feature for our annual public open house. 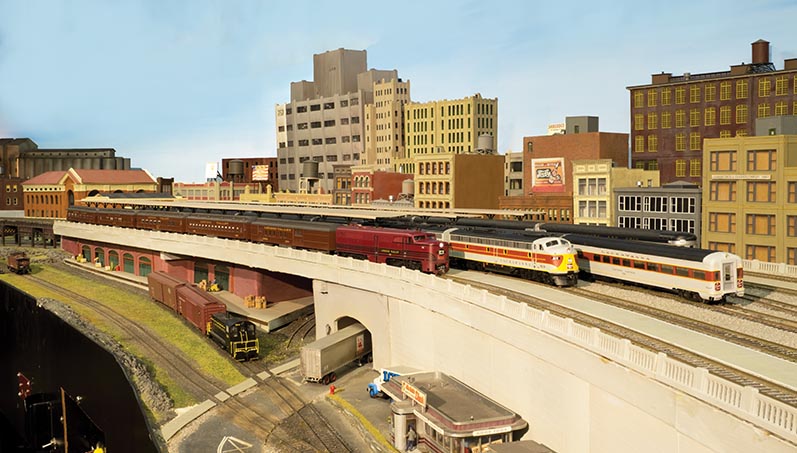 ABOVE: Powered by an Alco PA, the Black Diamond prepares to depart Buffalo for New York, while equipment is switched out for Lackawanna’s Phoebe Snow. The scene is based on the real Lackawanna Terminal in Buffalo, which hosted passenger trains on the upper level.

Design and construction of the current layout began in 1989. To eliminate some of the difficult access issues associated with the previous layouts, this design kept the majority of the layout at a fairly shallow depth from the aisles. This style of walk-around layout design was new at the time, and there were few completed examples. Member Tim Guenther, who was part of the design committee, built a small scale model of the proposed design so the other club members could better understand the concept, make recommendations, and approve the final design.

The benchwork was completed in four stages: the original double-ended staging yard in a separate room; the Buffalo Engine Terminal, Yard, and the Passenger Terminal (which was not part of the initial construction); the island that contains both Caledonia and Rochester Junction; and lastly the large section that contains Victor, Geneva, Lehigh Gorge, Bethlehem, Jersey City, and Hazelton…

Read the rest of this article in the March 2022 issue of Railroad Model Craftsman. Subscribe Today!