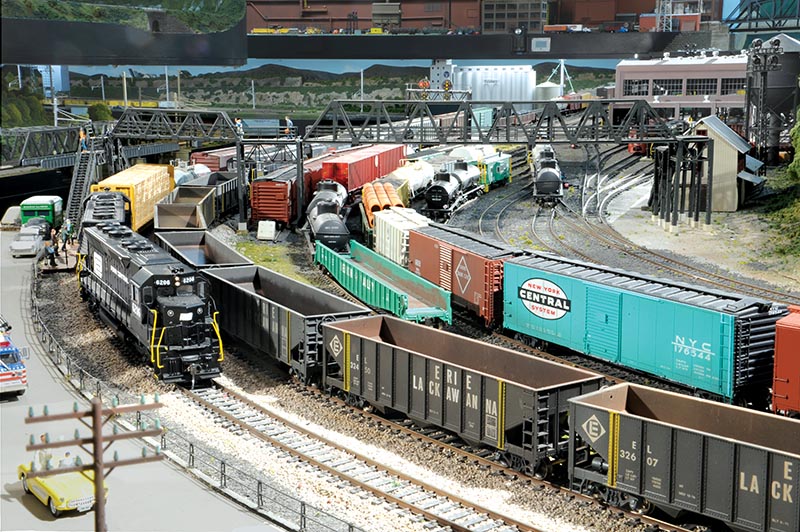 With dynamic brakes howling, two SD45s roll past the main street of Renovo, Pa., passing a northbound train pulling past the signal as it waits for the helpers on Ken McCorry’s HO scale Penn Central Buffalo Line. 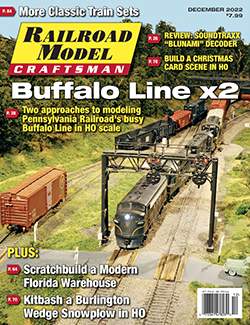 by Phil Montat/photos by the author

Growing up in Berwyn, Pa., along the famous four-track Pennsylvania Railroad main line, Ken McCorry got fully infected with the love of all things Pennsy, especially the electric operations. An American Flyer train set encouraged his fascination with trains at an early age, and after leaving the Navy in 1972 he built several PRR-inspired layouts in N scale. After moving into a townhouse, he was busy planning more of the same until a chance visit to the pioneering layout of Charlie Carangi completely changed his perspective. Here was a fully operational HO scale layout with working signals, automatic train stop (ATS), an operating hump yard, and locomotives that ran like Swiss watches; all under energized catenary that invited prototype operation on a regular basis. Ken soon learned all about the fun of operations from Charlie and fellow modelers — who also happened to be professional railroaders — Jim Dalberg, Bob David, Jack Chester, Tom Myles, and Larry DeYoung. No longer would a “generic” PRR layout fulfill his hobby goals.

Ken discovered the Buffalo Line reading PC Railroader magazine (a short-lived independent railfan publication). Even though he grew up along the mighty four-track main with electric motors, the rugged Buffalo Line and its helper operations appealed to Ken. He made the switch from N to HO, and became a member of a local round-robin group who gathered weekly to work on models and help one other. Along with Charlie Carangi, the group included Dan McCafferty, Doug Kley, and John Lassahn, in addition to the other professional railroaders he met earlier. They provided valuable prototype information about the Buffalo Line as he started to plan his new layout. 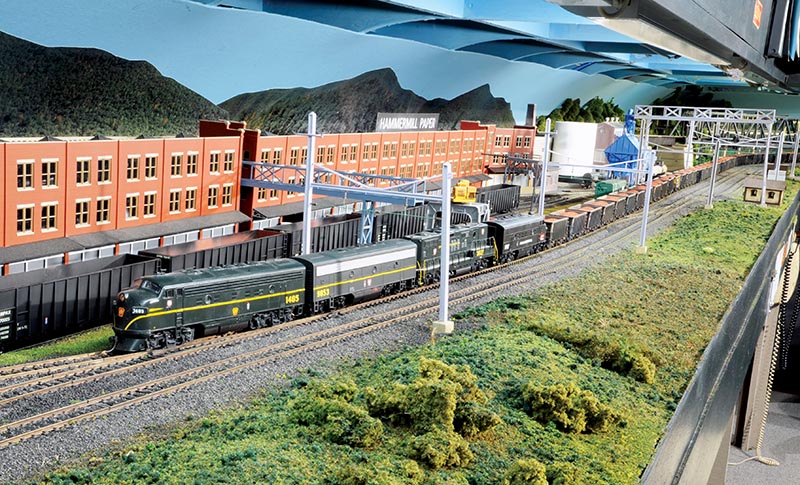 ABOVE: A heavy loaded ore train is taking the switch to the Bald Eagle Branch at Lock Haven as it plods by the giant Hammermill Paper plant. Ken kitbashed the plant which extends almost 15 feet along the wall on the second level of the layout.

In the meantime, Ken’s family relocated to the family farm outside of Valley Forge, Pa., in 1991. Lacking a suitable basement, Ken rebuilt the barn next door. The 32 x 80-foot barn provided almost 3,300 square feet for a model railroad on the second floor. The barn renovations were completed in early 1992. The 1993 NMRA National Convention was scheduled to be held in Valley Forget that July, just 18 months away. Ken had promised to open his layout for tours! The race was on.

Fellow modeler and friend Al Rennard turned Ken’s track plans into benchwork construction drawings. Many members of the Monday night group helped build modular plywood box benchwork sections at a rapid pace. The first section went in on February 8, 1993, with the rest of the upper level in place within a week. The “Golden Spike” for the main line was driven that April, allowing rudimentary operation for the Convention that summer. Once this goal had been achieved, work commenced on yards, control panels, signal system design, and scenery, with the first formal operating session being held in March 1994.
The first version of Ken’s Buffalo Line ran from Delevan to Enola/Harrisburg. Formal operations revealed some things Ken wanted to change, starting with the Keating Summit grade between Renovo and Port Allegany. He felt it was too short, and wanted a longer shove over the grade to lend a more prototype feel to the line. With the average train length being 30 to 35 cars pulled by two or three locomotives, one just started going up before you were going back down! Ken added a 24 by 32-foot extension to the barn, which was completed in 1998.

With the additional space, Keating Summit grade grew to more than 170 feet long, presenting a serious operational challenge to trains. With the new space below it, Ken first built a representation of the Harrisburg terminal and Enola Yard, with a working hump and extensive staging. But after operating this for several years with his growing band of regulars, he found that the extensive yard demanded too many resources (operators, equipment, and time) while not supporting running trains on the Buffalo Line itself. He also outgrew the original Delavan staging on the north end of the line. 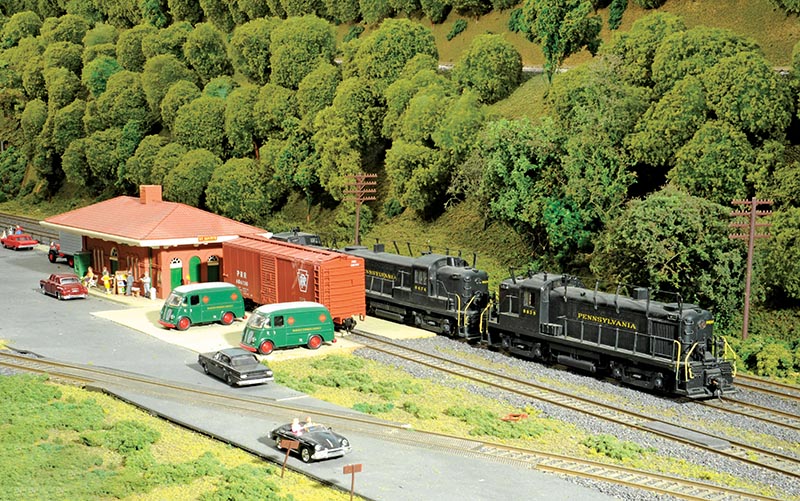 ABOVE: Two Alco RS-3s quietly burble away the afternoon at St. Mary’s, on the branch of the same name. The crew is at lunch and will return to Renovo before the local passenger train arrives. The track above is the Buffalo Line climbing at 3 percent toward Keating Summit.

In 2005, Ken revised the plan again, this time moving Enola staging below the original Harrisburg staging (on Level 1), and constructing a new upper level over what had been the old Harrisburg terminal for a new extension to Buffalo. This would allow the modeling of extensive heavy industries including massive ore and grain docks for unit train service, as well as a steel mill, flour mill, and auto industry facilities. It also solved the staging challenge at the north end of the layout by having a terminal yard instead of staging tracks. This also allowed lengthening of the main line to include the towns of Dauphin, Halifax, Millersburg, and Kreamer on the south end (located on Level 2 below the Buffalo Terminal).

The last piece of the puzzle fell into place when Ken decided to further develop the Bald Eagle branch and add staging for Clearfield and Altoona (located on Level 1), along with the town of Bellefonte. This allowed for the modeling of the many mineral trains out of these areas, as well as supporting more heavy industry and local operations. The other eleven branch lines that feed the Buffalo Line were already in place; the Wilkes-Barre Branch, the Erie Lackawanna Bloomsburg Branch, EL Catawissa staging, PC/EL Shamokin Branch and staging, the PC Berwick Branch, the former New York Central Corning Secondary, the Selinsgrove Branch, the Driftwood Branch to Falls Creek and Brookville, the St. Mary’s Branch to Erie, and the Farmers Valley Branch. The railroad had at last achieved its full size and scope…

Read the rest of this article in the December 2022 issue of Railroad Model Crafsman. Subscribe Today!