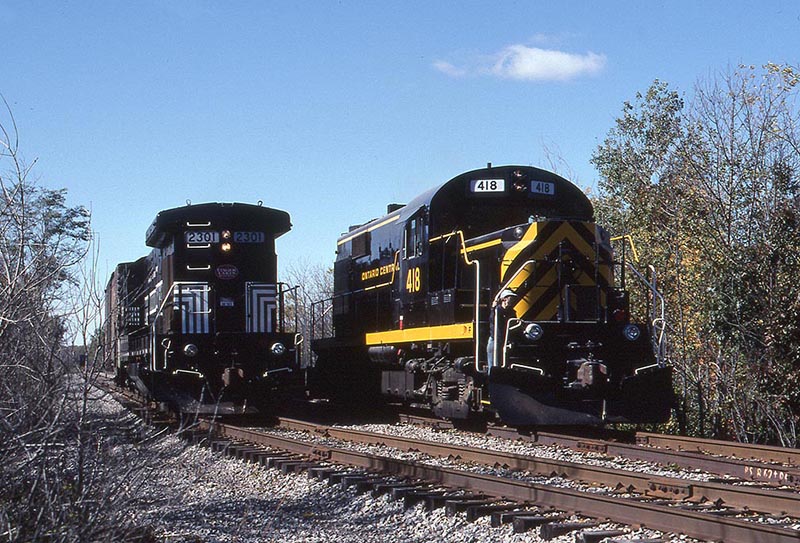 Model railroads are an exercise in compromise. We cannot always include every feature and every length of track we wish to include. This is one of the reasons short lines make good candidates for model railroads! I was hoping to design a railroad that would be fun for the casual operator, or the equipment collector. The layout I designed features some of the interesting highlights of this thirteen-mile line, and would give the modeler a chance to display his scenery skills and structure kitbashing talents. On this layout, you have an opportunity to model the interesting features of a heavy mainline, without having to operate the multitudes of trains that would sustain such features.

The Ontario Central Railroad (ONCT) was formed in 1979 to operate 13 miles of former Lehigh Valley mainline owned by Ontario County between Shortsville and Victor in western New York State. Interchange is with Finger Lakes Railway (FGLK) at Shortsville. Freight traffic is fed from CSX and Susquehanna at Syracuse and from Norfolk Southern at Geneva. Ontario Central rosters two locomotives, an Alco RS-36 and a leased EMD SW8.

Starting in Victor, the largest building on the layout is clearly the Victor Insulators complex (5). The plant is a series of simple modern steel and concrete block buildings that could easily be kitbashed from a variety of sources. My track plan includes the track lead into the plant, as well as the connector that runs from the former Lehigh Valley main up to the old New York Central Auburn Road (4). After negotiating some tight radius curves and a slight grade, we reach the storage tracks and the Victor Insulator loading site (6). You may also wish to include a model of the former NYC station (9) and the abandoned right of way alongside (3). The ONCT uses sidings inside the warehouse to house its locomotives, and you’ll want to include the distinctive turnout on the shared road and rail bridge (7) that leads to a small storage shed (8).

Back down the branch and into town, we turn east. Threading our way through the town of Victor, we pass behind the commercial district. The passing track is a remnant of the former LV double-track main. Passing under the Route 96 bridge, and making the first bend, we come to the Ryan Homes (11) siding. Ryan Homes is the largest residential home builder in the Rochester area, and they get regular deliveries of lumber to feed their operations. Their storage buildings could easily be modeled using the traditional open-air lumberyard shed kits from Atlas (#150-750) or Walther’s (#933-3057). Stacks of wrapped lumber and some forklifts would complete the scene.

Continuing around the peninsula, we pass through the abandoned remains of the old Manchester Yard. Represented are the old roundhouse (13), turntable (14), yard office (16), supply house, oil house, and coaling tower (15). This could become the focal point of the model railroad, depending on how you want to play it. You could represent the yard in its present decayed state, or backdate it to the final days of Lehigh Valley operation. The new Atlas roundhouse kit (#150-709) is a great match for this classic structure. This would be a perfect opportunity for the modeler who is looking for an excuse to model a large engine terminal and its associated facilities. An area like this could also be used to hold and display some of that equipment that you wouldn’t ordinarily have room or use for! Or, you could downscale the abandoned yard to add more customers (like an industrial park), or add more active yard tracks for flat switching.

I have chosen to add three customers in and around the roundhouse area as a sort of switching puzzle. Thompson Grain Co.(19) gets some occasional hoppers, and they use three abandoned LV 40-foot boxcars (17) for storage. The roundhouse was used as a food warehouse for many years. It could be quite a challenge to switch the grain siding while leaving room to spot the roundhouse/warehouse and the team track. I added a small siding for A&K Railroad Materials (20), even though in real life, cars are spotted on the main alongside their yard. Materials are loaded with a rubber-tired crane. Olcastle Precast (21) makes concrete structures, and I have made them a customer that loads finished product to waiting flatcars spotted on the main line.

The abandoned Lehigh Valley roundhouse complex in Manchester, N.Y., as seen in April 2005. The structure has been unoccupied for many years, and beyond any hope of restoration. Photo by Scot Lawrence

Continuing east, we cross the Canandaigua Outlet, and enter Shortsville. The Great Lakes Kraut Co. (22) is located here, just before the FGLK interchange. As on the prototype, the interchange consists of a simple runaround track. The Finger Lakes Railway took over the former Conrail Geneva Cluster of branch lines radiating out of Geneva in 1995. With the new operation came engines dressed in a sharp rendition of New York Central’s lightning stripe paint scheme. 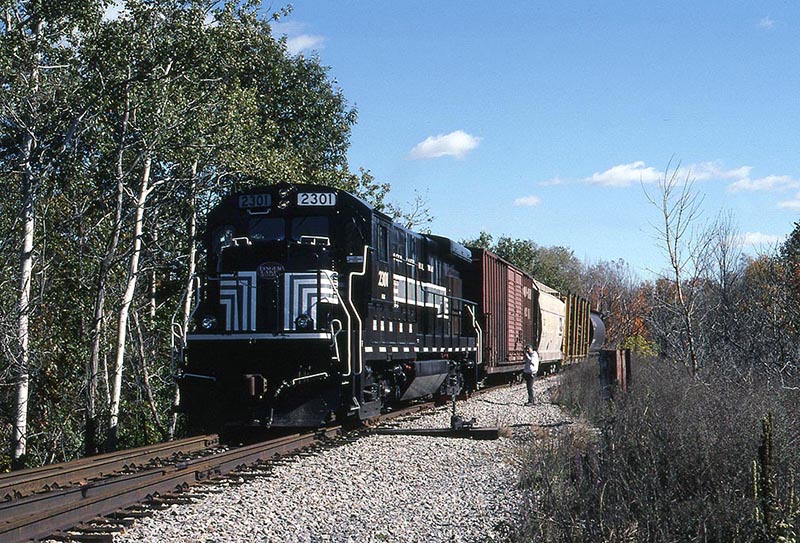 The Finger Lakes has a small fleet of both older GP9’s and newer B-237’s. Since most ONCT trains are scheduled to meet the FGLK local, this gives a great excuse to add even more modeled equipment to the mix! To add another dimension to operations, you could easily add a staging track to simulate traffic coming from Geneva.

The smaller diagram represents yet another idea for this layout. Instead of an around-the-walls point-to-point design, consider an island. This arrangement would join the ends of the line into a continuous loop. This might be more favorable for the modeler who wishes to simply sit back and watch the trains run!

Special thanks to Don Brown and the employees of the Ontario Central Railroad for their assistance in making this article possible.