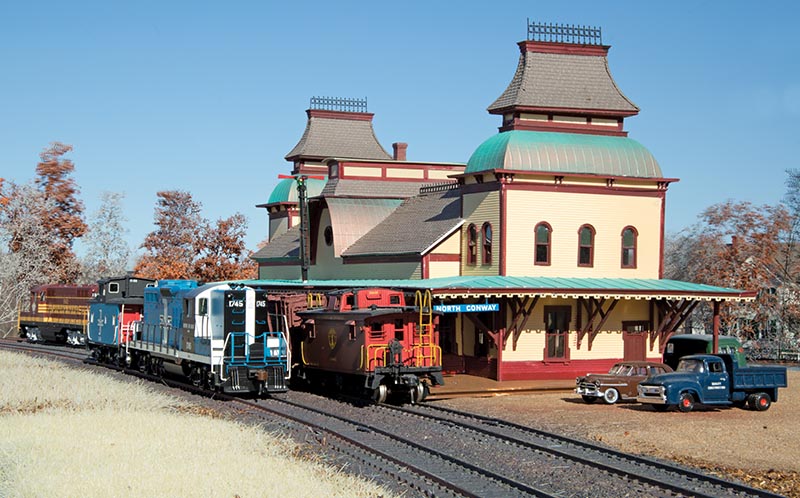 By Justin Franz and Otto Vondrak/photos as noted

Nestled in the heart of New Hampshire’s Mount Washington Valley is the quaint village of North Conway. The community is part of Conway, a town of about 10,000 people pinned between the boundary with Maine to the east and the White Mountain National Forest to the west. For many visitors, North Conway is a place to go shopping at its many outlet stores or to use as a base camp for adventures into the White Mountains—home to the 6,288-foot Mount Washington, the tallest peak in the Northeastern United States. But for railroad enthusiasts it is known as the heart of the Boston & Maine Railroad’s legendary Conway Branch, which today is home to the Conway Scenic Railroad.

Conway was chartered in 1765 by Colonial Gov. Benning Wentworth and named in honor of Henry Seymour Conway, a British general and statesman. In the 19th century the area became popular with tourists for its scenery and location; it was close enough to Boston that it was accessible — certainly more accessible than other rugged parts of New England — but far enough away that it was possible to escape from the hustle and bustle of regular city life.

Seeing tourism in the White Mountains as a potential source of traffic, the Portsmouth, Great Falls & Conway Railroad was constructed in the early 1870s from Rollinsford north 67 miles to Intervale, where it would connect with the Portland & Ogdensburg Railroad (better known as the Maine Central Mountain Division over Crawford Notch). Rails reached the village of North Conway in 1872. By then, the Portsmouth, Great Falls & Conway had been leased by the Eastern Railroad, a larger road that competed with Boston & Maine for traffic between Boston and Portland, Me. In 1874, the railroad would construct a new depot at North Conway designed by Boston architect Nathaniel J. Bradless. The building was constructed in a unique, Russian-inspired Victorian design. While the depot might have looked more at home in an urban setting, its eccentric style reflected North Conway’s place as the railroad’s gateway to the White Mountains. 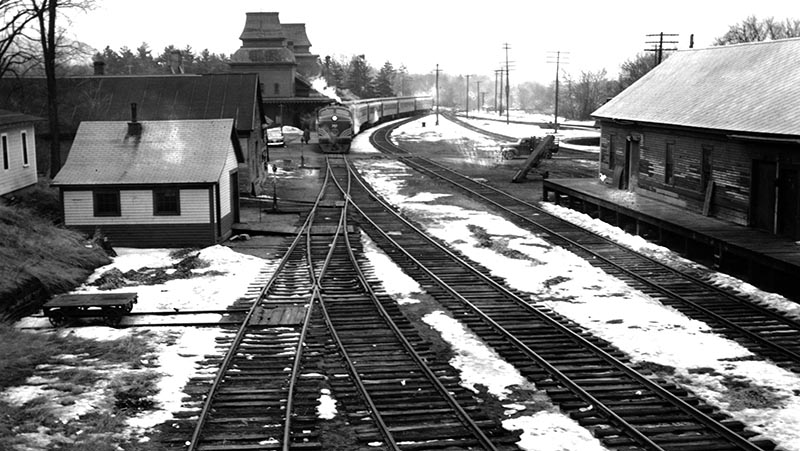 ABOVE: A train from Boston led by an EMD E-unit has just arrived at North Conway in this 1957 view looking south toward the station. —Dwight A. Smith collection

The Eastern Railroad had always struggled to compete with B&M and in 1883, the latter entered into an agreement to lease the troubled route. That agreement lasted for just seven years when, in 1890, the B&M purchased the Eastern Railroad outright. The Portsmouth, Great Falls & Conway route between Rollinsford and Intervale became the B&M Conway Branch.

While there was some freight on the branch, passenger trains were much more common in the early 20th century, with at least two daily round trips between Boston and North Conway during the week. In the steam era, those trains would be hauled by 4-6-2 Pacifics, with streamlined E-units taking over in the diesel era.

Modern streamlined luxury came to the Conway Branch starting in the 1930s, when B&M and MEC teamed up to run the Mountaineer, using a Budd-built diesel-electric streamliner (perhaps better known as the Flying Yankee, which was its original assignment between Boston and Bangor, Me.). The Mountaineer would run from Boston north to Rollinsford where it would take a left onto the Conway Branch and continue north to Intervale. There it would switch onto MEC trackage, head through Crawford Notch, and then return to B&M at Whitefield for the final leg of the trip to Littleton.

As the modern ski resort industry blossomed, regular weekend “Snow Trains” from Boston to North Conway brought skiers and other recreationalists to the White Mountains. The trains were a regular winter tradition from the 1930s until the 1950s. Regular passenger service came to an end in 1961. By then, the service was being operated with B&M’s pool of Budd Rail Diesel Cars (RDCs). After passenger service ended, the Mass Bay Railroad Enthusiasts would sponsor a series of “Snow Trains” fan trips through the 1960s. 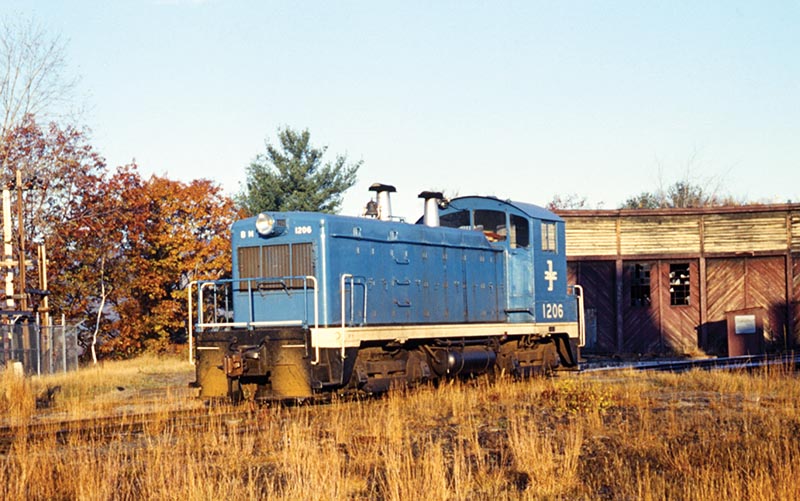 ABOVE: Boston & Maine NW2 1206 was awaiting its next assignment on a fall morning in November 1968. —Matthew D. Cosgro collection

Freight service continued into the early 1970s. In later years, B&M operated a local called DI-1 and ID-2 that ran between Dover (near Rollinsford) and Intervale. According to a 1972 freight schedule, DI-1 would go on duty at Dover at 7:30 a.m. Monday, Wednesday, and Friday and run north to Intervale, switching industries along the way. While the vast majority of B&M and MEC interchange occurred elsewhere (at places like Portland’s Rigby Yard), some cars bound for an industry on the Conway Branch might be picked up from the MEC at Intervale. After that, the DI-1 would make the short trek back to the yard in North Conway and the crew would put the locomotive (in later years, usually an EMD SW9 in the 1200-series) in the roundhouse and take their rest in the bunk car. The following mornings on Tuesday, Thursday, and Saturday, they would go on duty as ID-2 at 6:30 a.m. and head south.

The last freight run came on Halloween Day 1972. That same year, the branch was abandoned north of Ossipee, where a large sand quarry was located. In the 1980s, the southern 43 miles of the branch were sold to Boston Sand & Gravel, which operates it today as the New Hampshire Northcoast. Today, the railroad haul sand that feeds Boston’s insatiable construction industry. Not long after passenger service ended, North Conway’s impressive depot was purchased by some local business owners intent on saving the structure. In the early 1970s, they teamed up with Dwight Smith, a B&M employee, to purchase a short section of the branch and establish the Conway Scenic Railroad. Opening in 1974, the steam-powered tourist line operated only between North Conway and Conway. In 1994, the railroad began a lease of the former Maine Central Mountain Division from the State of New Hampshire, which purchased it from Guilford in the early 1990s after regular freight service ended a decade earlier. Conway Scenic began running regular excursions to Bartlett in 1994, and to Crawford Notch in 1995. 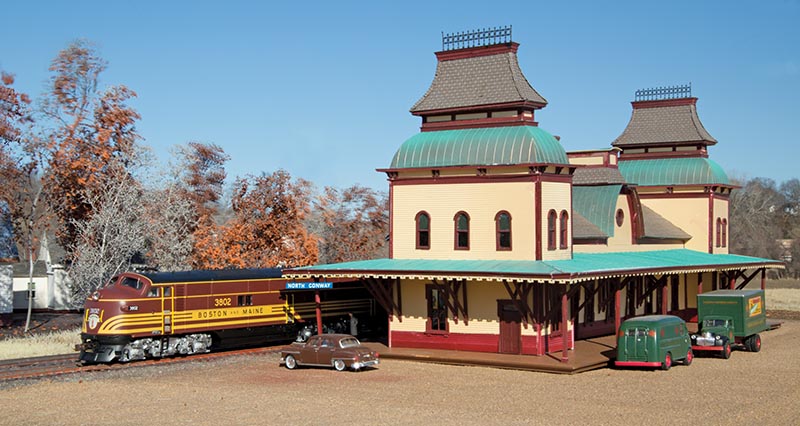 ABOVE: A sleek B&M E-unit is leading the return trip to Boston. This view shows the street side of the depot, complete with Railway Express Agency delivery trucks at the ready. —Dan Munson photo

A Model Terminal
Many branch line terminals are modest affairs, sometimes consisting of nothing more than a humble engine house and a small station that doubles as a freight agency. Perhaps a runaround or a stub track to serve a loading dock round out the scene.

For those looking for an excuse to model larger structures, North Conway checks off all the boxes. Almost as if designed by a model railroader, it has everything you could ask for, including passenger station, freight house, roundhouse, turntable, section house, and servicing facilities.

Keep in mind the arrangement at North Conway was designed for a very specific operation, in this case, the movement of passenger trains. The storage tracks in front of the station are designed to hold trains laying over between runs, while a small yard just north of the station serves whatever freight traffic is generated. A 1923 Sanborn map shows a grain and feed mill located next to the section house, but there is little indication they were a railroad customer. The same map also shows an ice house at the north end of the yard, which could possibly support the loading of refrigerator cars or milk cars destined for Boston and points beyond.

The interchange with Maine Central at Intervale is a mile north of town, and would be perfectly represented by staging. Depending on your tastes, you could have the B&M switcher head to staging to drop off and pick up cars as needed. If you’d like an excuse to model MEC equipment, you could modify the operation to have the Maine Central crew arrive from staging to exchange cars at North Conway, instead. Longer sidings in front of the station are suited for storing passenger trains, but if your operation is freight only, they could be modified to fit your available space…

Read the rest of this article in the July 2021 issue of Railroad Model Craftsman. Subscribe Today!