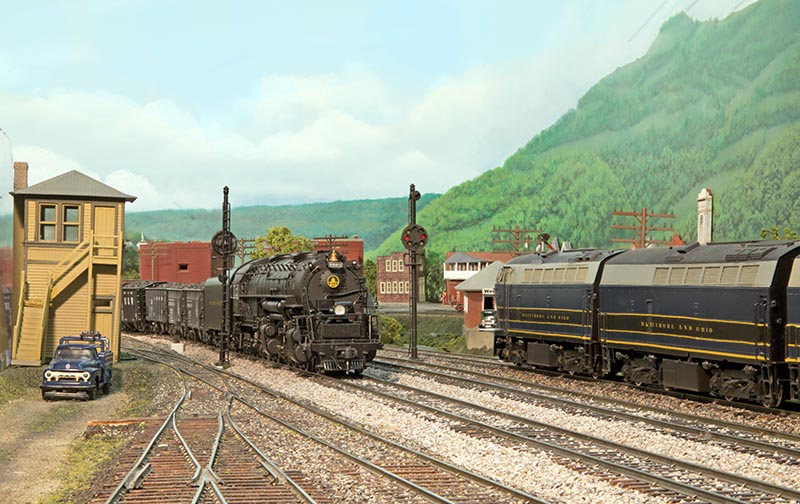 Baltimore & Ohio EM1 7620 hauls coal past Piedmont Tower on its way to terminating at Keyser, W.Va. The helper was removed at Oakland and a single engine was sufficient going downhill. A set of Baldwin RF-16 “Sharks” gathers speed hauling empty hoppers up 17 Mile Grade bound for Grafton, W.Va.

By David Parks/photos by Dan Munson

Railroads are just one component of my interest in industrial history, technology, and distribution processes. I particularly enjoy on-location research about historic railroads and how they interacted with the communities they served. About 25 years ago, after modeling railroads of the American West for most of my life, I decided to model an Eastern location I knew little or nothing about for my next challenge.

An important criterion was that the central town on the layout be a place my wife would enjoy visiting during research trips. With no preconceptions I decided to model whatever I found on location, emphasizing how railroad transportation interacted with people and industries. After some consideration, I chose Cumberland, Maryland, in the heart of the Baltimore & Ohio system.

Cumberland is a living museum of industrial history and railroads are its most important component. I felt like I stepped back in time when I looked out the window of Amtrak’s Capitol Limited. The old Western Maryland Railway station and many other iconic buildings were still standing if not entirely functional. The yards and shops were humming with activity. The Baltimore & Ohio Queen City Hotel Station was the only missing jewel. 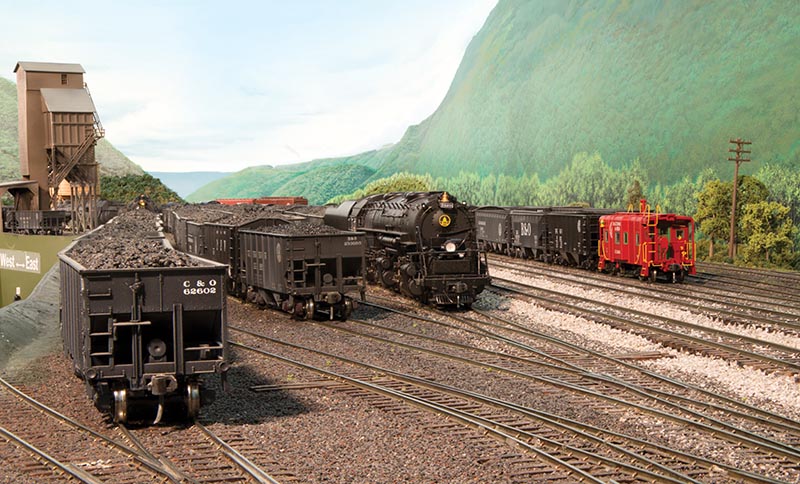 ABOVE: B&O Grafton Coal 2 has just arrived at Keyser Yard. The trip from Grafton traversed a pair of mountain ranges and finished with a coast down the torturous 17 Mile Grade. The helper engines will be removed since the rest of the trip to Brunswick is at water level.

We settled into an historic bed and breakfast near downtown and began the research. To my surprise, a portion of fallen flag Western Maryland Railway had been reincarnated as Western Maryland Scenic Railroad and every day it ran up the mountain to Frostburg. The WM station was in the process of restoration. Today, the Visitor Center for the C&O Canal National Historical Park occupies the station’s first floor. The canal’s terminal turning basin is recreated nearby. Could the canal fit into the model transportation system?

When I began my project, I had first expected to only model the B&O. Now I found two railroads and a canal. By the time of my proposed 1953 layout, the canal had long ago ceased operations. No water and barges on the layout after all! One of the scenic attractions of the B&O is the long masonry viaduct where the “West End” route turned south. Decades after the viaduct was constructed, the originally preferred route into Pennsylvania branched at Viaduct Junction. The Cumberland viaduct location became ground zero for developing a layout plan extending in all directions.

Anticipating Operations
“Givens and druthers” for the layout were single level, no internal steps or duck-unders, and three-foot aisles to accommodate operating crews. I wanted to provide for “operations,” but I really didn’t know what that meant. My first layout plan was British-style, where Cumberland would be the focus with all departing routes disappearing behind a screen into staging. Consistent with my intention to model whatever I found on the prototype site, I soon expanded the layout to include al least some of the surrounding territory. 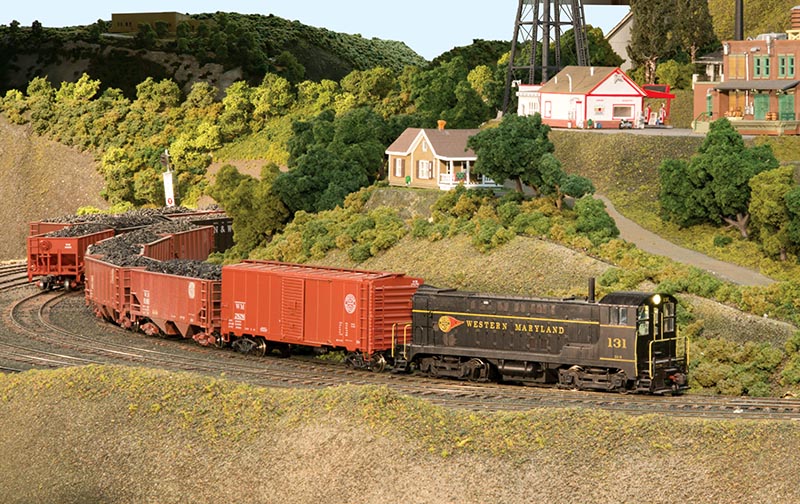 ABOVE: A WM local switcher assists the Frostburg Mine Turn serving the Borden Deep Shaft mine. On the layout this hill, like all the scenery, is constructed from Bragdon lightweight two-part foam and casting resin. The mountain is light enough to be removed for servicing the infrastructure beneath the town.

I found that while B&O classified manifest cars in Cumberland, coal trains were serviced at the nearby town of Keyser, W.Va. The layout plan had to expand at least that far.

I soon discovered that WM as well as B&O had a full-fledged main line junction in Cumberland. Baltimore & Ohio arrived first and usually took the preferred locations. Western Maryland and most of its predecessors arrived later, so their track had to go over, under, and around the B&O.

During my local research I found roadbed, tracks, excavation, abutments and a host of stranded buildings that told ghost stories of numerous local railroads no longer operating. Abandoned roadbed, sometimes with rails left behind, gave testimony to the maze of historic trains that called Cumberland home. Anything still present in 1953 deserved to be represented on the layout.

Growing the Layout Room
Over the years we had extensively remodeled our hillside house in California, but there was never a place for a layout. Locally, Kermit Paul inspired the concept of creating a basement under an existing dwelling. In my case this meant digging into the hillside from our first floor. This would yield a new space of about 1,200 square feet. My wife approved the plan that divided into approximately equal areas for an exercise room, office, entertainment (wine cellar) and the model railroad. 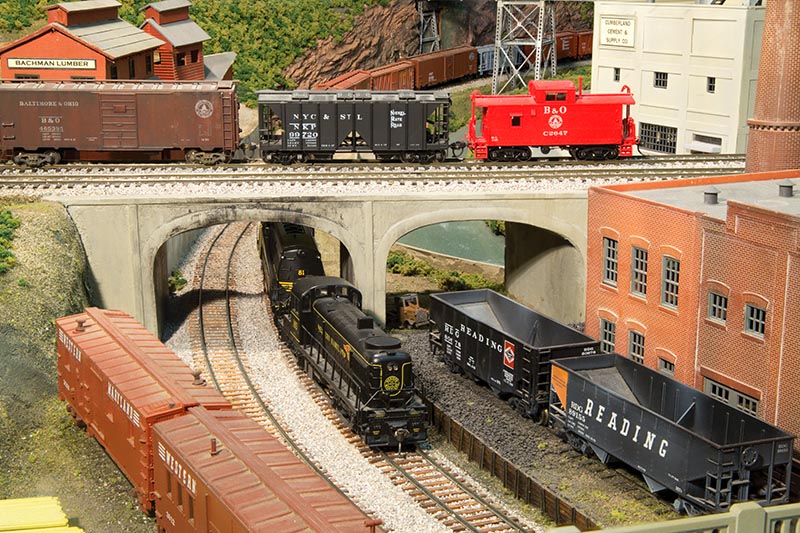 ABOVE: Western Maryland Train AJ-4 dips under the B&O viaduct. This manifest will pass through Cumberland and trade car blocks at Ridgley, W.Va. The camp cars in the foreground left reside on what once was a multi-elevation wye connecting the two railroads.

The first plan met these requirements with the house supported by several steel posts. With each revision submitted to the town’s building department, the railroad got bigger, the other rooms got smaller and the posts began to disappear. The final plan had only one big room and no posts.

My goal was a panoramic view with only a single layer of visible layout. As the track beyond Cumberland expanded to fill the entire room, staging was forced under the layout. Considerable staging was required to handle the simulated traffic in and out of Cumberland, on both the B&O and WM. In the final plan, two layers of double-ended staging with 35 tracks created 70 logical storage locations. All staged trains face the same direction. Thus staging operators could manipulate power and consists from a single position and any train could be stored on any track. The stage storage tracks and ramps to the visible layout have half a real mile of track and over 100 turnouts – all hidden. Automation to the rescue!

Read the rest of this article in the July 2021 issue of Railroad Model Craftsman. Subscribe Today!