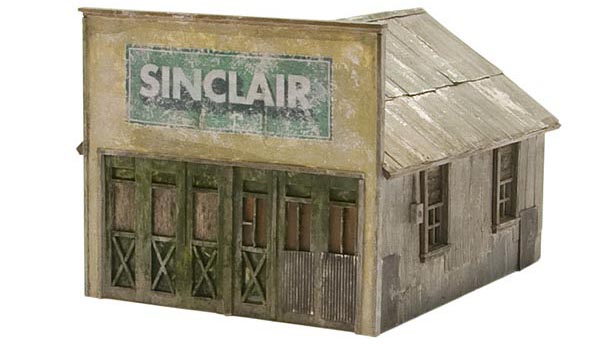 This service station is modeled after a prototype Sinclair that is near the author’s home in Elberta, Utah. Its structure is strip and sheet styrene that has been clad it corrugated metal from Builders In Scale. The windows are from Titchy Train Group and the door was scratch built. By the way… This is N scale! Photo by Todd Hamblin, model by Chris Brimley

by Chris Brimley/photos as noted

About ten years ago two things happened to me that influenced me to model the locale I do. The first was I stumbled upon information on the former New York Central West Side Freight Line (often called the “High Line”), the only all-rail freight route that served Manhattan island directly. The second was actually taking a trip to New York City and having my senses overwhelmed. At the time I was building a small N scale mining layout, but my visit to New York inspired me to junk it and begin plans for my grand city named Hudson.

Time went by and after a few false starts I fell away from the hobby for a few years. A little while after getting married I started to get the itch again, but because of space constraints I was unable to build a layout. I decided to begin work on some structures that would hopefully have a home in the future. I had set a few ground rules early on that I wanted to push myself to continue to improve my skills as I went from project to project.

I started with a hotel made from Design Preservation Models’ modular walls. To make it less industrial looking and get closer to the effect I was looking for I scratchbuilt the top and the bottom floors. It worked and I realized to truly get what I wanted I would need to scratchbuild. Not being wise, I jumped into the deep end and started my Dominion Trust Building. After a few months of working on it, I realized I was in over my head. So I shelved the building and popped out a few smaller and more basic structures to help hone my skills and get a few finished projects under my belt.

Pleased with the results, I returned to the Dominion Trust Building and completed that project. I was on a high now that I had tasted scratchbuilding, I was hooked and wanted more. During the construction of the Dominion, I had a blog that I posted updates of my progress on. I befriended Frank Giacobbe who was also running a site of his own. Because of our strong similar interests we decided to merge our blogs and form a website that we call N Scale Limited (which was discontinued in 2012).

While the City of Hudson still remains on hold, I am in the midst of construction on a sliver of my proposed metropolis. It is called the Hudson Terminal Railroad and is a fictional subsidiary of the New York Central. It is a small 7-foot-by-14-inch shelf switching layout that is heavily influenced by the multiple terminals in New York that were once served by car floats. This will bring new challenges to scratchbuild, such as car float barges, a gantry style float bridge, and large warehouses. I always welcome the challenge because it makes me a better modeler because of it. 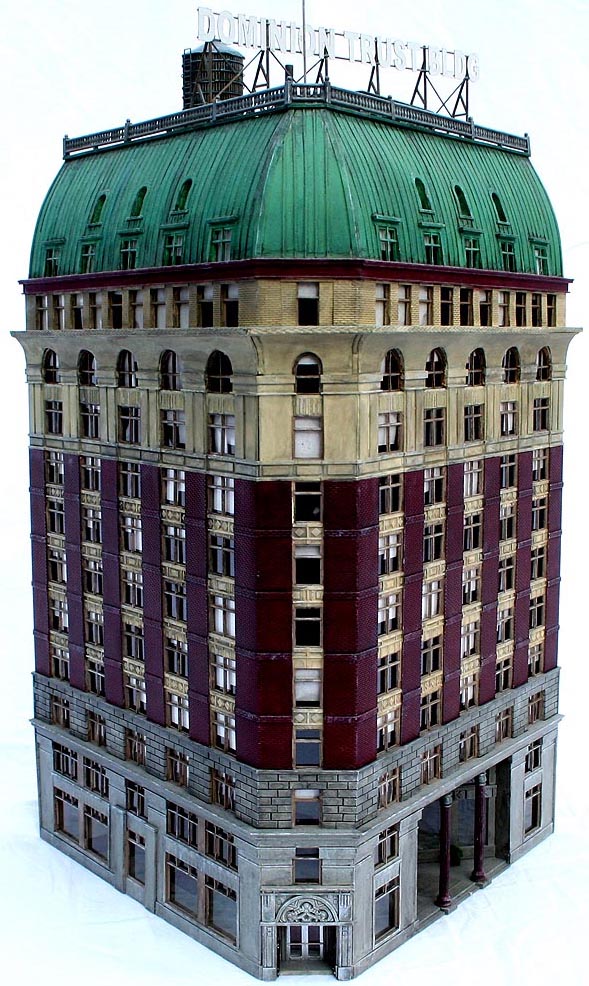 This is quite a large structure for N scale! The prototype Dominion Trust Building is located in Vancouver, British Columbia, Canada. The author took a few liberties from the prototype by changing the colors to match a post card that was printed soon after its construction in 1910. It is built primarily of strip and sheet Evergreen styrene. The brick sheet is made by Holegate & Reynolds. The building has over 160 windows, all but a few were hand framed, most of which has up to twelve parts. Photo and model by Chris Brimley 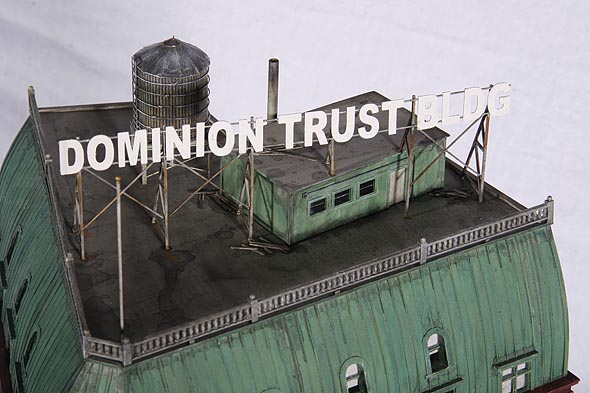 We take a closer look at the rooftop details of the Dominion Trust Building. The water tank was built by wrapping Northeastern Scale Lumber siding around a dowel. The weathered copper-clad roof is aluminum foil and the base is Evergreen styrene I-beams. The rooftop sign matches one that was on the prototype from 1930-1950’s. The letters are cardstock that were cut out with a digital craft cutter and the scaffolding is thin strip styrene. Photo and model by Chris Brimley 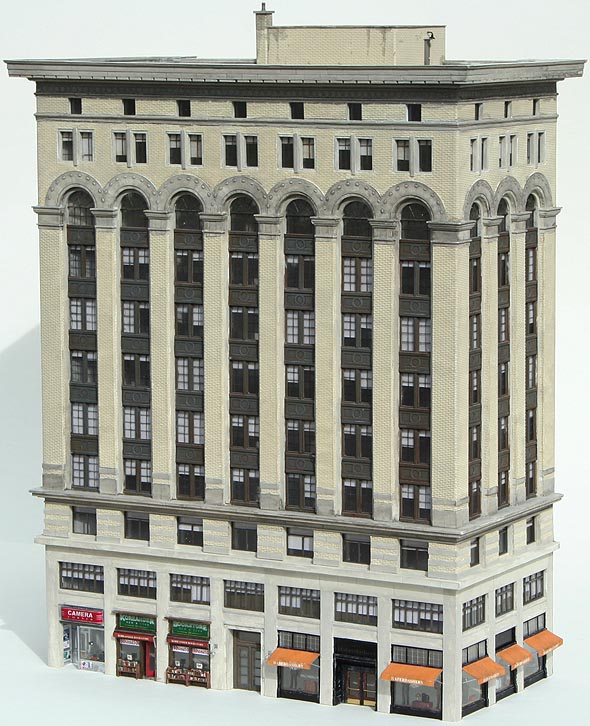 My most recently finished structure, the Hudson Life Building is very closely modeled from the prototype Detroit Life Building in Detroit Michigan. Construction is of the same materials as the Dominion Building but this time around I used a digital craft cutter made by Quickuts on many parts. Much of the arched window details and the ornamentation between the windows was cut using this machine. The store fronts on the main floor are all my own designs, but influenced from many prototypes. Photo and model by Chris Brimley 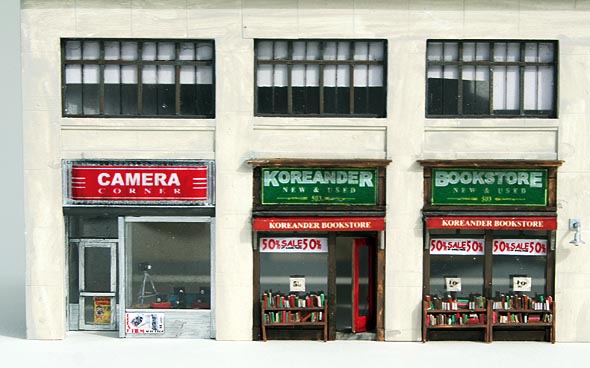 A closer look at the storefronts on the ground floor of the Hudson Life Building. The camera store and the bookstore are both freelanced designs that comprise of items from prototype locations that inspired the author. The signs on both were created by the author in Adobe Illustrator and printed on a glossy presentation on a laser printer. The cameras are made from styrene and the tripod is from a thin wire. The bookshelves and books are scratchbuilt from styrene and painted appropriately. Photo and model by Chris Brimley 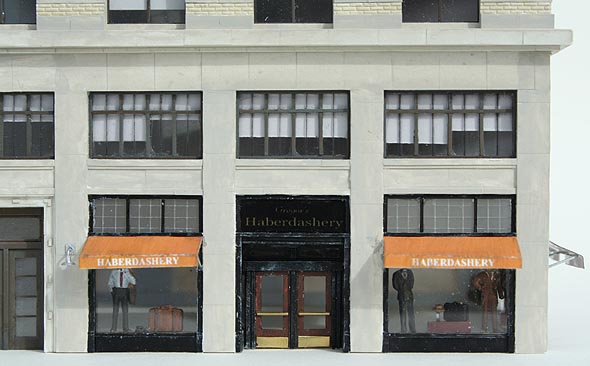 This high-end men’s fashion store was heavily influenced by a haberdashery in St. Paul Minnesota. The awnings are paper with wire supports. The displays in the windows are made from unpainted figures and luggage from Preiser and hats made from styrene. The brass door hardware is a nice touch. Photo and model by Chris Brimley 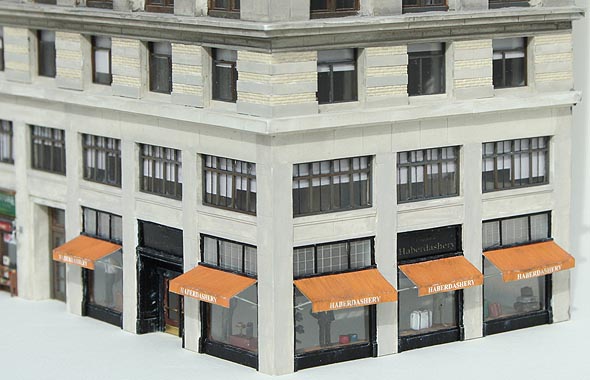 This view of the Hudson Life Building lets us appreciate the full detail of the haberdasher’s as well as the cornice and brick detail in the first few floors. Photo and model by Chris Brimley 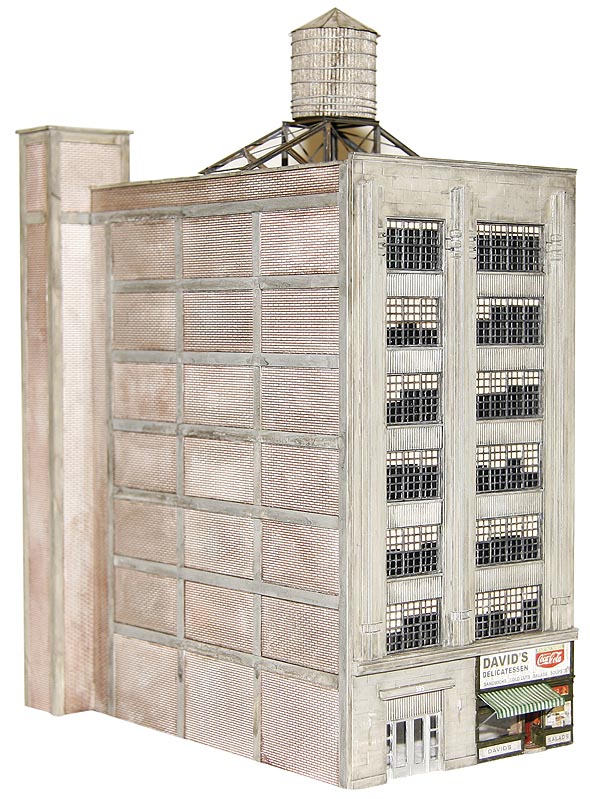 The Gordon Building was made specifically as a “sketch,” to test out some ideas for the Hudson Life Building. It is my own design and not based on a specific prototype. While architecturally different, its method of construction and structure are virtually identical. The windows on this building are made from a brass mesh. Photo by Todd Hamblin, model by Chris Brimley 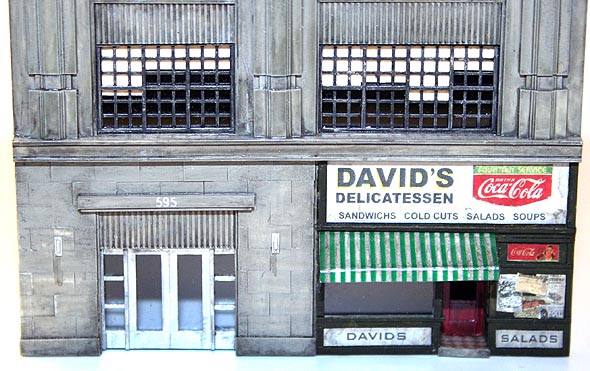 The first floor of the Gordon Building features a small delicatessen. The deli was built up from strip styrene, and the signs were either designed by the author or adaped from vintage ads that were found online. The awning is paper with wire supports. Photo and model by Chris Brimley 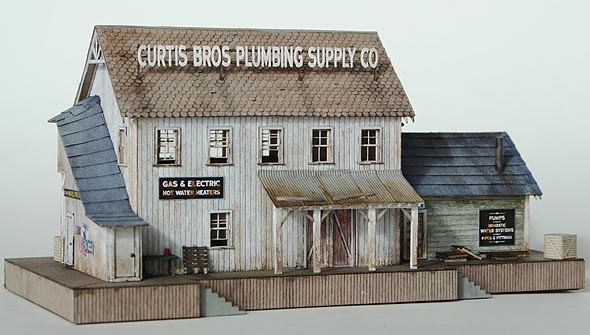 Not all of the author’s projects are tall skyscrapers or scratchbuilt. This small warehouse was built from a kit made by a relatively new company called Paw of a Bear. The Curtis Bros. Plumbing Supply kit is intended for modelers with intermediate skills, or those looking for a new challenge. The author plans to use this structure in the not-to-distant future on a module that will include a small town scene. Photo and model by Chris Brimley