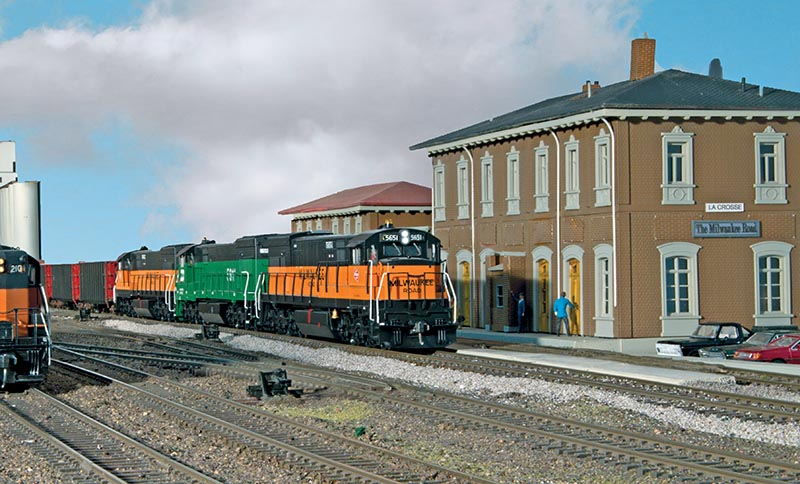 Train 281, an empty unit coal train, pauses at the La Crosse depot for a crew change. The Milwaukee Road and Burlington Northern alternated coal trains and pooled U30Cs and wide-vision cabooses to run these trains between the Powder River basin in Wyoming and a power plant near Portage, Wis.

by Al Lesky/photos by Dan Munson

Long a Midwestern fan favorite stretching from its namesake city across the prairies to the Pacific, The Milwaukee Road faded into the history books when it was acquired by Soo Line in 1986. I started working for The Milwaukee Road on a section gang, then in the baggage room, and finally as a yard clerk and train order operator from 1973 to 1976. This gave me an insight into the everyday workings of the railroad along the Mississippi River. I had done some clerking in Winona and Red Wing, Minn., but mostly I was a yard clerk at Camp 20, La Crosse Yard in Wisconsin. “Camp 20” is the name for the yard office at La Crosse, which is located about four blocks east of the depot. Part of my job was entering all of the car movements between St. Paul and La Crosse into the railroad computer system. This experience gave me insight into what was going on in the other towns upriver, such as Wabasha and Lake City.

Over the years I made trips to model railroad operating events in Kansas City, Chicago, and the Twin Cities. Visiting these operations-based model railroads had a positive influence on me and left me with linear thoughts. In other words, I wanted to design the railroad to go from one place to another through the towns that The Milwaukee Road went through along the Mississippi River.

I built my version of The Milwaukee Road so that I could have friends over to operate like the prototype. I wanted to capture the feel of a real railroad, to give the operator a sense of the traffic that the railroad moved, and the feel of the work that the railroad did to get that accomplished. 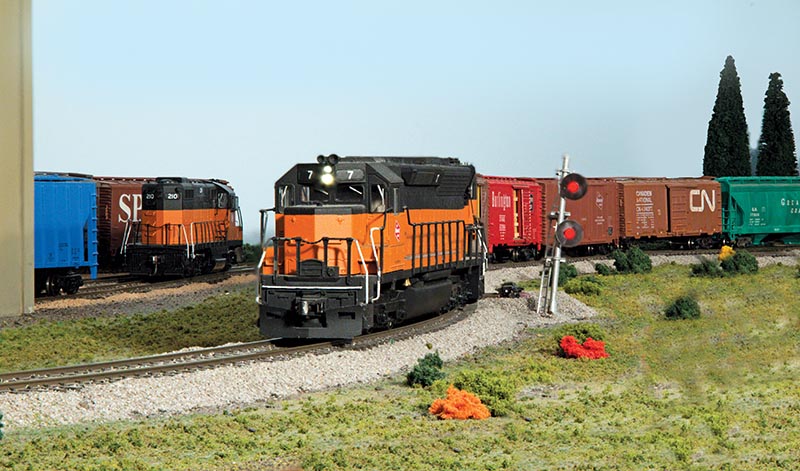 Eastbound Train 200 (Seattle to Chicago) departs Red Wing, Minn. This train will set out at La Crosse and pick up Chicago cars on the way to the Windy City. Waiting patiently is the “Patrol” (local train) with a GP9 waiting for its turn on the main.

Construction
Planning for the layout and then demolition of the old basement began in early 1999, with construction starting that summer. A large crew of friends all connected through the local Riverrail group worked one night a week on The Milwaukee Road. Riverrail is an informal group of operation-based model railroads around the La Crosse area. After a little over a year and a half of constant work, the first full-blown session took place on June 22, 2001. The Riverrail crew has been awesome, and I couldn’t have done it without them.

The layout is built in a 35×35-foot basement and is double-decked. Benchwork is open-grid using half-inch-thick plywood for strength with 1-inch foam insulation for the subroadbed. The thinking was that these two products wouldn’t shift or expand due to temperature or humidity changes in the basement. It has held up very well during almost 20 years of operations. Bus wires and phone wires, along with future signal wires, were installed before gluing the foam insulation on. I used Atlas Code 83 flex track throughout, with Atlas No. 6 turnouts in the yards as well as on the main line. HO scale cork roadbed supports the main line, while sidings were laid with N scale cork. Yard tracks and industrial spurs are right down in the mud (fastened directly to the plywood), just like the prototype. 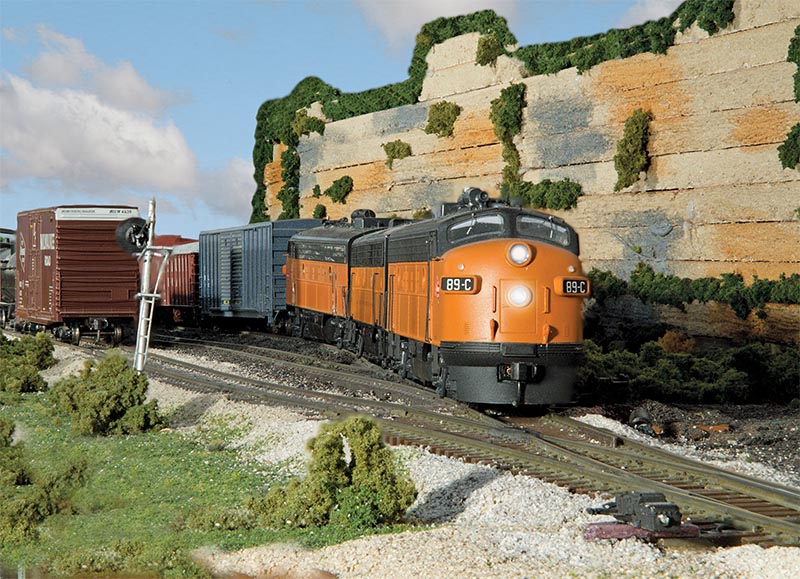 The Savanna, Ill., to St. Paul, Minn., way freight Train 301, has a set of A-B-A F-units on the point today. The crew is setting out local cars at River Jct. Later, these cars will be dragged into La Crosse Yard and sorted.

The structures are a mix of Walthers and other commercially available kits, as well as several scratchbuilt buildings. All were built to resemble the types of structures typically found along The Milwaukee Road. Again, I had lots of help from my Riverrail friends.

Most of the scenery was made using actual dirt from the Grand Crossing area. “Grand Crossing” is the named location where the former Milwaukee Road, Burlington Northern, and Chicago & North Western crossed at grade in La Crosse. I carefully sifted it and stored it in two 5-gallon pails. For my scenic base, I painted the surface of my layout with brown latex paint, sprinkled the sifted dirt onto that, and then added some Woodland Scenics grass mixture. I oversprayed with 70% alcohol and then a 70/30 mix of white glue and water. After this dried, I added trees, bushes and underbrush to complete the scenes…

Read the rest of this article in the January 2021 issue of Railroad Model Craftsman. Subscribe today!