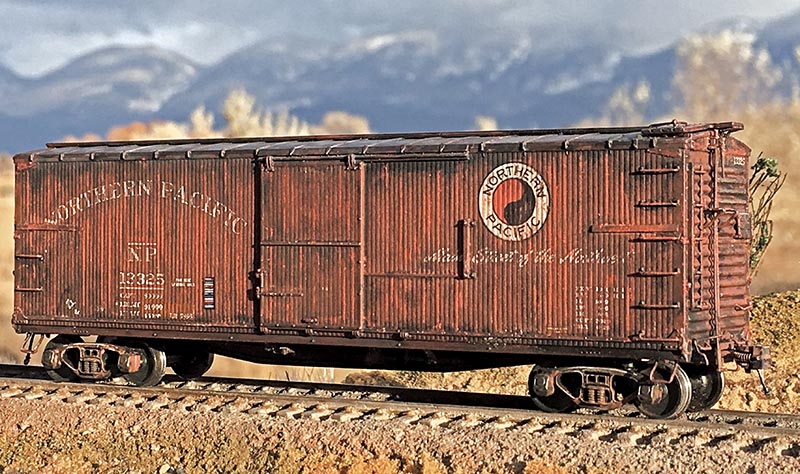 Northern Pacific 13325 received the post-1945 repaint scheme with 48-inch monad, and remained in revenue service until it was finally scrapped in May 1969. By then the aging car had been relegated to service hauling hides to a tanning facility.

by Chris Frissell/photos as noted

By the late 1960s many railroads still maintained small fleets of well-maintained, pre-war wood-sheathed boxcars in revenue service, but they often had seen various modifications and were weathered with age. Many more wood-sheathed cars retired from revenue service could be seen in maintenance-of-way service. This gives modelers focusing on the 1960s and 1970s a chance to run some of the excellent and interesting models available of wood-sheathed equipment.

Among the most ubiquitous of non-revenue cars is the venerable 40-foot boxcar, such as the 40-foot double-sheathed boxcars in the Northern Pacific 10000-13999 series, now offered in HO scale by Rapido Trains. At first glance a plain-Jane 40-foot boxcar, freight car enthusiasts know this NP boxcar had several distinguishing features, including small A-end doors for hand lumber loading, metal-sheathed, gently arched radial roof, and lever-activated handbrakes.

The sheer abundance of these boxcars and the fact that they often shipped softwood lumber from the Pacific Northwest to customers across the nation meant that this car was a familiar sight on most railroads in North America, from the year of their introduction in 1923 through the 1960s and even 1970s. 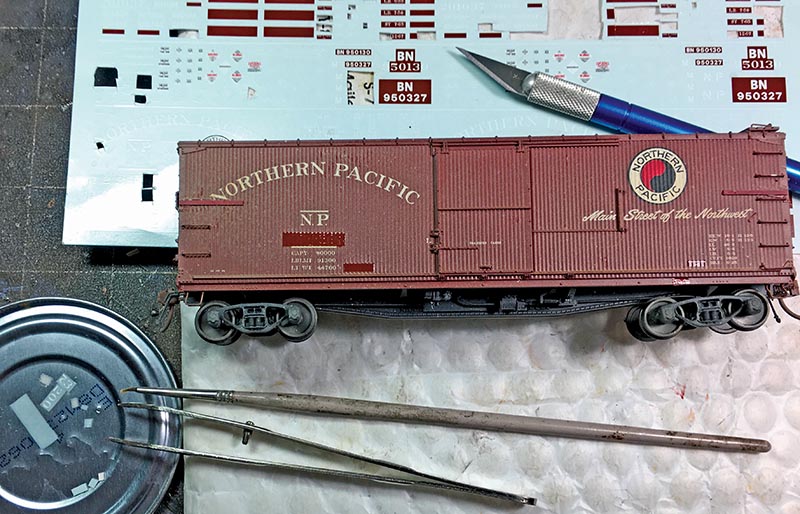 During their life span these boxcars passed through two generations of airbrake systems and four generations of lettering schemes, all represented as different versions in the Rapido release. The Northern Pacific Railway Historical Association (NPRHA) Company Store (store.nprha.org) offers an exclusive run of separate numbers and an unnumbered version of the Rapido model.

Headquartered in St. Paul, Minn., the Northern Pacific Railway connected the Great Lakes with Puget Sound, its main line completed in 1883 with a golden spike driven by former President Ulysses S. Grant at Independence Creek, Mont. Allied with James J. Hill’s Great Northern Railway and gaining access to Chicago through cooperation with Chicago, Burlington & Quincy, the three railroads were not combined into one system until the approval of the Burlington Northern merger in March 1970.

Northern Pacific was a fastidious custodian and repainter of its rolling stock, at least until the 1960s when two events conspired: many of these boxcars approached the end of their operating life span, and the railroad’s executive priorities became focused on negotiations for the coming Burlington Northern merger. As a result, during the last decade of NP operations and the first decade of its corporate successor, quite a variety of paint schemes were seen on these boxcars. Many of these cars (retired in the late 1950s through the 1960s) had been repainted into the post-1945 48-inch “monad” scheme, but some remained in the early 1940s repaint scheme with 36-inch herald and black ends and roof. 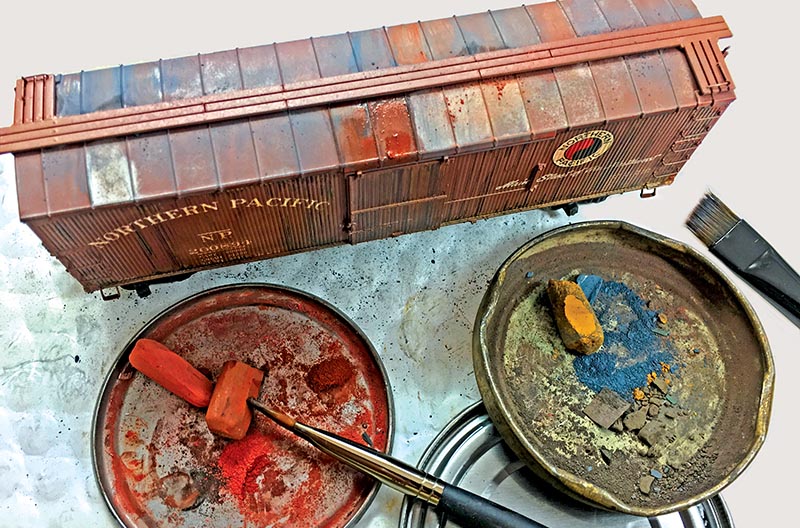 The Dullcote fade effect, a key weathering method the author used on all of these cars, involves one or more light applications of 70% isopropyl alcohol wash with a soft watercolor brush to a Dullcote-finished surface. The alcohol acts as a solvent that partially dissolves the Dullcote, apparently carrying moisture into the topcoat for a frosting or fogging effect.

More important to modelers of the transition era from NP to BN, large numbers of these cars had been patch-painted, renumbered, and otherwise modified for non-interchange company service. By the mid-1960s, while a handful remained in revenue and interchange service, these boxcars had become a backbone of Northern Pacific’s maintenance-of-way fleet, repurposed as general purpose supply or tool cars. After the 1970 merger, these cars were seen throughout the BN system.

In this article I describe weathering, lettering, and car body modification I have used to model the Rapido boxcars in both revenue and non-revenue or company service on the NP in my model year of 1969. The modifications range from minor relettering and weathering to more involved surgery. The methods illustrated can be used to update and “down-service” the wood-sheathed boxcars of any North American railroad.

Modeling Late 1960s Renditions
Old freight cars find many different pathways to their ultimate end. Each car has its own story to tell; modeling the aging and era-specific modifications is a way of retelling the story. Accurately modeling specific cars is best assured by working from photos of specific cars from the era of interest. Northern Pacific modelers can find further useful information at the website of the Northern Pacific Railway Historical Association (nprha.org) in the Numerical Equipment Registers, which record the history of individual car numbers through the NP era and into the early BN years…

Read the rest of this article in the January 2021 issue of Railroad Model Craftsman. Subscribe Today!