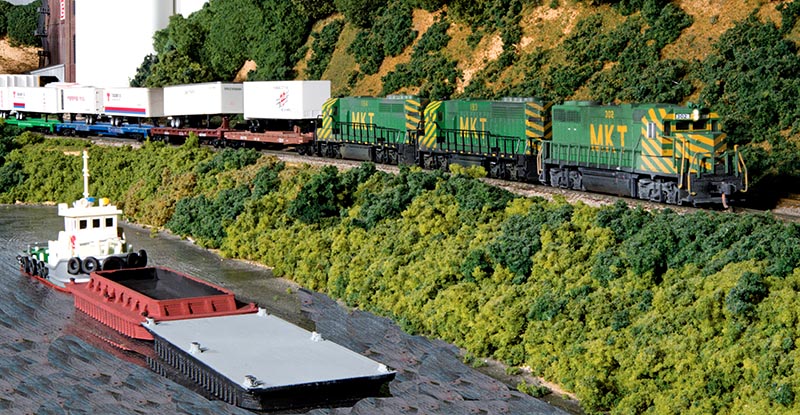 Even though it is named first, the Missouri-Kansas-Texas Railroad (MKT) didn’t start in Missouri. The Tebo & Neosho Railroad broke ground in 1867 in Sedalia, building south to Clinton, Mo., and then into Ft. Scott, Kan. The railroad was acquired by MKT in 1870, and the route between Sedalia and St. Louis became the St. Louis Subdivision, connecting St. Louis to the rest of the system at Parsons, Kan. By mid-century, the railroad was struggling to make up revenues from lost traffic and pay off financing for new diesels. Heading into the 1970s, a leaner Katy found new prosperity hauling unit coal and grain trains.

Starting in 1971, a new green-and-yellow paint scheme replaced the deep red previously worn by Katy diesels. This green is sometimes referred to as “Whitman Green,” after company president Reginald Whitman who served from 1970 to 1975. By 1985, management put the reborn railroad up for sale, and it was acquired by Union Pacific in 1988. The line across Missouri has since been abandoned and the rails removed, but the “Mighty Katy” lives on in Bret Overholtzer’s N scale St. Louis Subdivision. 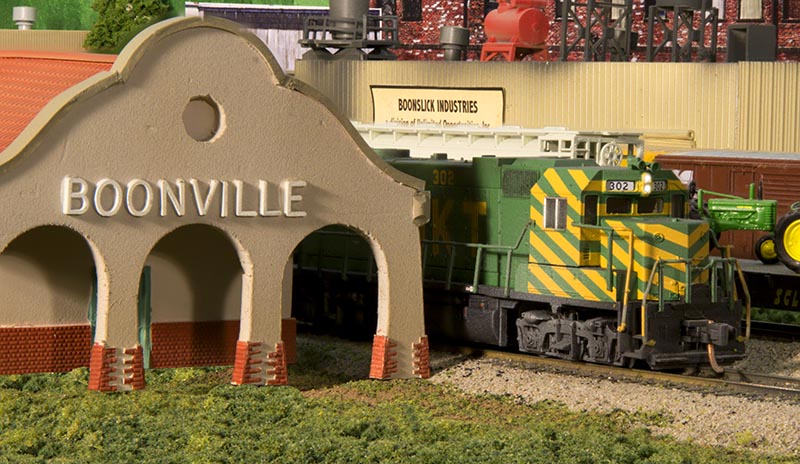 An eastbound MKT train passes the Boonville, Missouri, depot. The depot was scratchbuilt by Stephen Priest, based on the prototype.

Construction started in 1990 when Bret and his family moved into their suburban Kansas City home. The railroad was built in a section of his basement, measuring 15×25 feet, with a 19-foot staging extension in an adjacent room. The Katy started out as a D.C.-powered railroad using a Computer Cab Control system integrating Bruce Chubb’s Computer-model railroad interface (C/MRI). Although the layout is now DCC powered, the C/MRI system is still fully implemented, running signals, block detection, and turnouts, and now provides a connection to the dispatcher’s panel controlled by Java Model Railroad Interface (JMRI).

Bret and his father spent a lot of time together building the layout. It’s no surprise that Bret’s dad got him started in the hobby when he was gifted an old Aurora “Postage Stamp” train set. Despite its crude origins, Bret was hooked and stuck with N scale ever since. For years until his father’s passing, Bret and his dad were active in a local N-Trak modular club, traveling to many events around the region.

Bret’s MKT railroad was designed and built for operations from the beginning. Bret models the year 1984 which allows him to have modern EMD SD40-2s and some of the more colorful late-era paint schemes on his railroad. On the prototype, MKT only ran one train a day each way across Missouri in the 1980s. The line hugged the Missouri River from Boonville toward St. Charles, and wasn’t as well engineered or maintained as the Missouri Pacific line on the south side of the river. Consequently, the MKT route was regularly flooded out by the Missouri River. 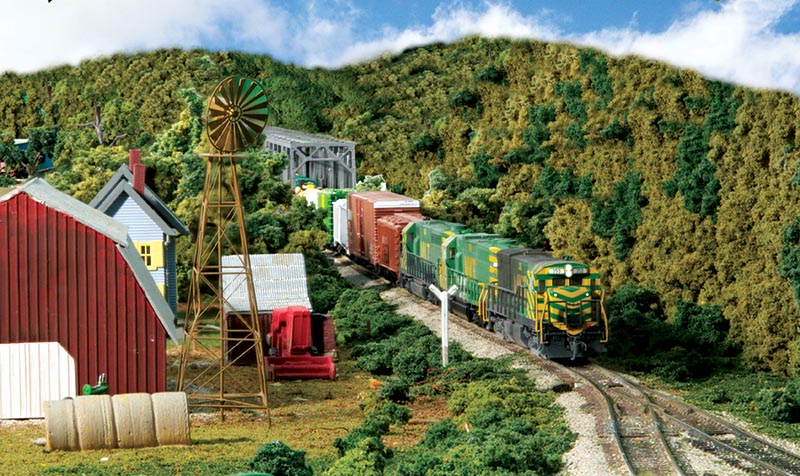 One of only three General Electric locos on the MKT’s roster, U23B 350 leads an eastbound train over the Missouri River Bridge at Boonville and on into New Franklin, on the north side of the “Mighty MO.”

A devastating flood in 1986 was one of the main reasons the majority of the St. Louis Subdivision was abandoned. Following the 1986 flood, MKT trains gained trackage rights over the former MP route (acquired by UP in 1982) between St. Louis and Sedalia that same year. Katy trains then ran on the south side of the river until it too was merged into Union Pacific in August 1988.

The Layout
The MKT St. Louis Subdivision is a single level, point-to-point railroad with staging set off in another part of the basement, along with the dispatcher desk. Staging on the east end represents Baden yard in St. Louis (the northernmost point on the railroad). Staging on the west end represents Sedalia, Mo., and points south and west on the railroad. The staging yard has 17 staging tracks, both single-ended and double-ended, all controlled by the dispatcher during operating sessions…

Read the rest of this article in the March 2021 issue of Railroad Model Craftsman! Subscribe Today!