Using classic HO scale kits from AHM and Atlas as a base, the author was able to create a number of beautiful and unique depots on the cheap.

The rural train station was once the center of every town, where journeys began and ended. Perhaps you’re looking for a temporary photo prop to drop into a scene. A train station not only adds visual interest to your model railroad, but an operational aspect as well. We’ve all come across the classic HO scale kits offered by AHM and Atlas on hobby shop shelves or at a local train show. These stations have really nice tooling with details molded into the structures which can form the basis of a nice model with proper painting and finishing. Even better, they can often be picked up for just a few dollars.

Farmington Station
The AHM Rural Freight and Passenger Station (no. 15301) reminds me of similar structures seen in most parts of North America. The model is not an exact replica of any one style, but emulates stations in rural Ontario, Quebec, New England, or the Midwest. This kit was later released by IHC (no. 4101) with an updated freight door and operator’s bay, and can be found easily on the secondary market.

These kinds of stations were the hub of small hamlets which would include a handful of houses and maybe a general store. I would think this rural station with maybe a couple of houses, a loading ramp and a short siding could be a great addition to any layout. 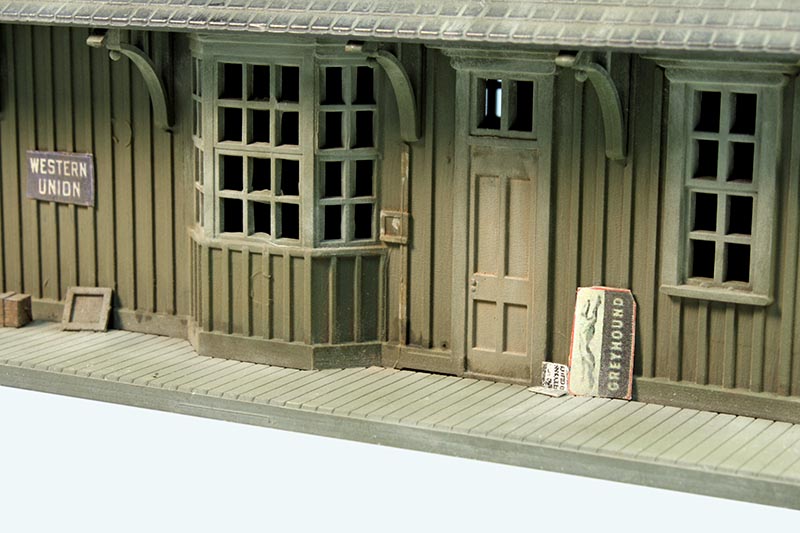 Details like the Western Union and Greyhound sign help put the station in a specific place and time.

The last couple of years I have been attending Trainfest with the Niagara Frontier Region NMRA. We setup a Craftsman Corner where 10 to 15 members work on various projects while interacting with visitors. At Trainfest 2019, I took along my AHM station, giving me a chance to present to the public how I apply weathering and details to a structure.

Before leaving home, I applied a base coat to the station. I spray-painted the roof flat black and the walls Camo-Coat olive (available at Home Hardware in Ontario, but any similar camouflage spray paint will work). Tremclad has various camo finishes that will work also. A flat finish is desirable, as PanPastel powder needs a bit of grit to grab onto.

Having a dark base color on a model to begin with is something that one learns from watching how theater stage sets are prepared. They paint the set a flat black then add coloring to what they want to be highlighted in the scene. No bare wood should show through. The same holds true with plastic kit structures. 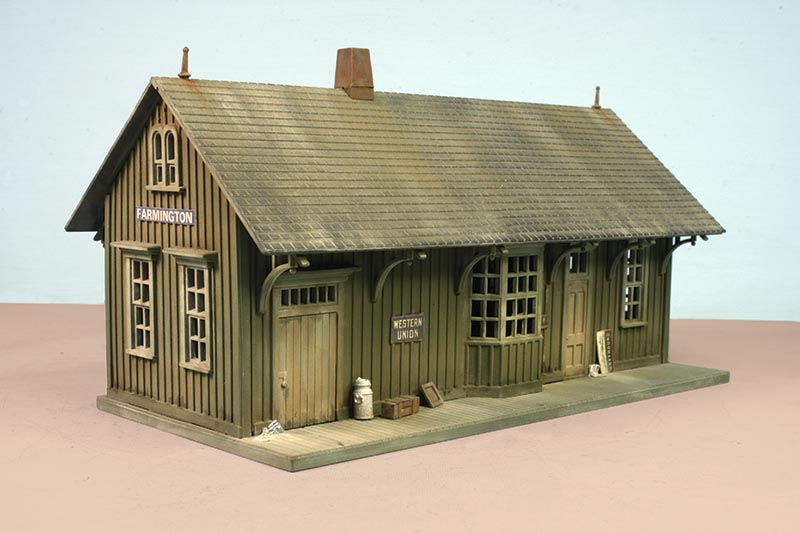 The finished Farmington Station model. The station features blue-and-white signs reminiscent of those used by the Maine Central and Boston & Maine.

At the show I applied PanPastel powder to the walls, windows, doors, and roofing. Doing this give the walls a faded see-through look with the original coloring bleeding though. For more information regarding their use, see “PanPastels for Easy Weathering” in the October 2019 issue of RMC. If you do not use PanPastels or powders, one could get a similar effect by dry-brushing your favorite brand of lighter color paints over the dark base coat.

Using a wide brush, the station walls are lightly coated with PanPastel raw umber shade, a tone I like using because it has a dirty appearance. For the windows, doors, and trim I used a larger size micro brush and PanPastel neutral grey shade. Over the grey on the doors a light coat of PanPastel burnt sienna shade is applied. I also highlighted the door corners and wall edges with AK Interactive enamel wash for wood. The wash is really a nice subtle effect.

One window had some damage so I applied a sheet of plywood offered by Roomettes. It is a heavy cardstock that looks very realistic. I used a silver marker to dab on the locks and power connectors. Anything metal also got a highlight dab.
The roof is coated with various shades of PanPastels using the widest brush I had. The coating is done very lightly. I began with neutral grey shade, then neutral grey and neutral grey extra dark, the three shades I keep on hand. A final very light dusting of PanPastel raw umber shade is applied which gives the roof a bit of a dirty look. Using these colors over black paint gives the look of years of runoff streaking. The texture of the roof has very crisp looking shingles or possibly slate that the PanPastels seem to highlight well. Chalk or Bragdon powders will also work to attain this effect. The chimney is painted with Anita’s Craft Paint in rust red. There are two lightning rods that would have been rusty, so Bragdon bright rust is touched to the rods. 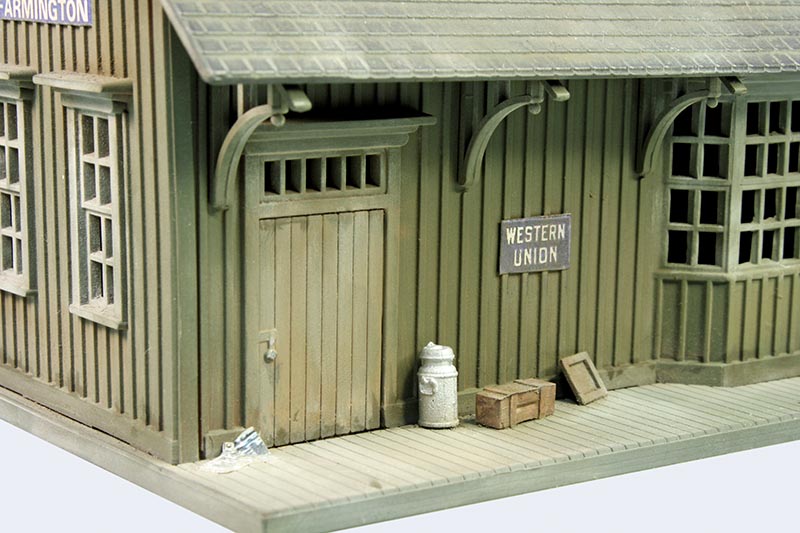 The lower area of the door and walls are weathered using AK enamel wash for wood which is actually a stain.

The station platform is colored the same as the walls. I applied grey PanPastel coloring as on the roof, but applied heavier. The greys really reflect the look of an aged concrete platform.

Since I model New England, I thought to use a name and sign style from this area. “Farmington” has a nice ring to it and could be located in several states. The blue-and-white signs are reminiscent of the porcelain enamel station signs found on Maine Central or Boston & Maine lines. Adding a sign from your area could easily do the same. I also added a Western Union sign to the walls and a Greyhound sign (found in a FOS Scale kit) leaning out front as if the station was once a bus stop along their route. The back wall has a few old posters beginning to peel off. Details on the platforms are minimal but include old newspapers, a Juneco milk can and a Tichy box lid…