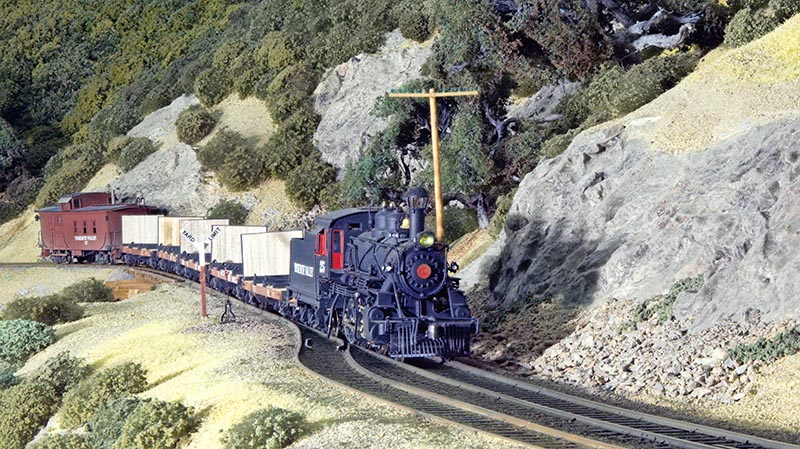 Train No. 8, the Log Train, has just passed the Yard Limit sign as it makes its way eastbound to Incline where the empty log cars will be left. It will then continue east, turn on the wye at Moss Canyon, and return to pick up the loaded log cars and take them to the lumber mill at Merced Falls.

By Jack Burgess/photos by Dan Munson

I was 13 years old when I received my first train set for Christmas. I soon had my circle of track mounted on a sheet of plywood and even added a mountain. But I couldn’t afford turnouts on my meager allowance so that project was short-lived.

I got back into model railroading in 1965 and started building a simple 2×6-foot freelanced model railroad layout. By my own standards, it was not very good. Freelancing seemed to suggest that I could ignore real railroads and make compromises when I lacked the knowledge needed to build more accurate models. Due to limited finances, I was forced to scratchbuild everything.

I also met another model railroader who was building scale models of actual freight cars that he photographed and measured in the Southern Pacific yards in town. That prompted me to give up freelancing and switch to modeling a real railroad.

Picking a Prototype
But which “real” railroad to model? In a nutshell, I needed to model a real railroad in California since I didn’t think that I could ever travel to another state to learn what the trees there looked like or what color the dirt was. I didn’t want to model a popular railroad since expensive brass locomotives were being imported every month for those railroads and I couldn’t afford them. And the railroad that I would pick needed to have a book written about it since I would need a lot of prototype photos to scratchbuild the locomotives, equipment, and stations for that railroad. 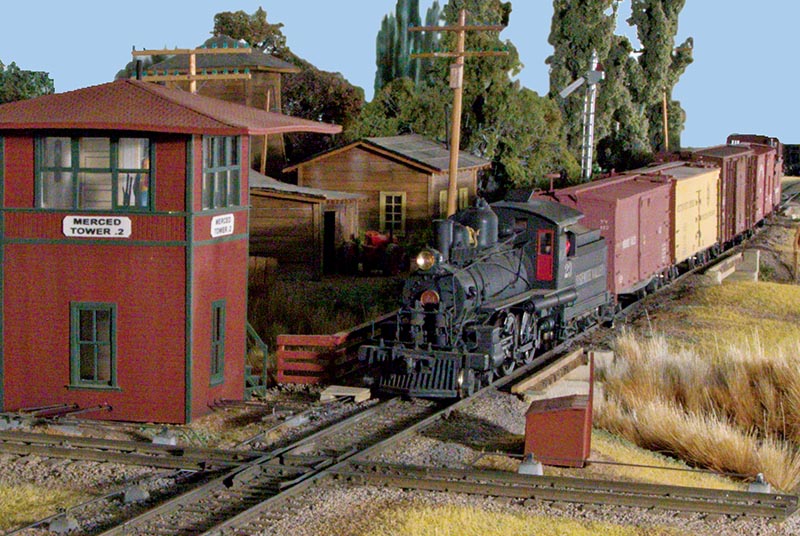 The derails are closed and the signal changed to PROCEED allowing the YV freight train to continue to Merced. The red “box” to the right of the YV tracks is visible in several prototype photos of this crossing.

Our local library had only three books on railroads— the Virginia & Truckee Railroad near Reno, Nevada (still close), the Sierra Railroad, and the Yosemite Valley Railroad. The scenery around the V&T didn’t excite me, and the photos in the Sierra book were small and limited in number. So in August 1967 I decided to model the Yosemite Valley Railroad. My parents gave me a copy of Railroads of Yosemite Valley by Hank Johnston for my 21st birthday. If someone had told me then what the next 50 years of my life would become based on that choice, I would have considered them crazy.

My chosen prototype ran from Merced, in California’s Central Valley, to the western boundary of Yosemite National Park. The YV was completed in 1907, and in those days railroads were not allowed to be built in national parks. While it was only 78 miles long, it operated like a major Class 1. It operated Pullmans during the summer months from Memorial Day to Labor Day with a leased SP diner. The equipment was always well maintained and, in fact, a former employee who I later met was hired as an “engine wiper” in 1942. That meant that the YV freight cars that I would build needed to represent a high level of maintenance and pride in the railroad by its employees. 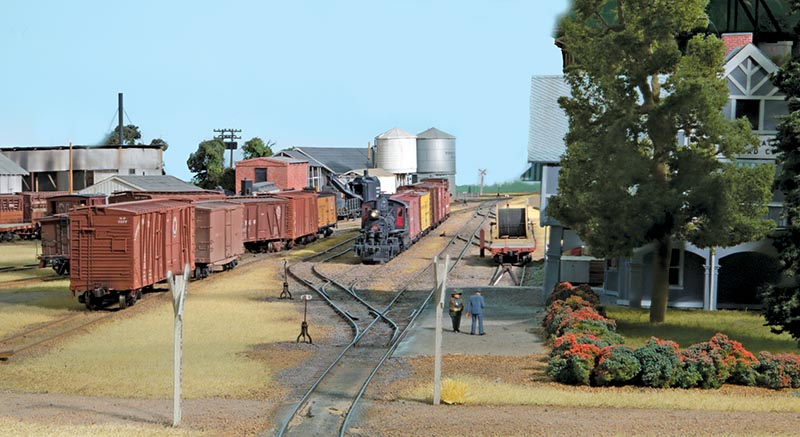 The two-story Merced station and freight house is on the right and the roundhouse in the background along with the wood water tank and steel oil tank. The trees and rose bushes around the station lawn are prototype.

Over the years, the YV developed several online shippers which made modeling those operations very interesting. These included the Yosemite Lumber Co., which had an incline to bring YV log cars down to the main line from their operations 4,000 feet up the mountains. The railroad purchased 175 log cars to move those logs from the woods to an online lumber mill at Merced Falls.

Yosemite Portland Cement had a limestone quarry 2,000 feet above the main line at Emory which used another incline railway to move that crushed limestone down the incline to a 275-ton storage bunker at trackside. The railroad purchased 51 ex-Great Northern Railway 22-foot-long hopper cars (called “rock cars” by the YV) to haul limestone to a plant near Merced. Other online shippers included a barite lead plant as well as several gold mines. 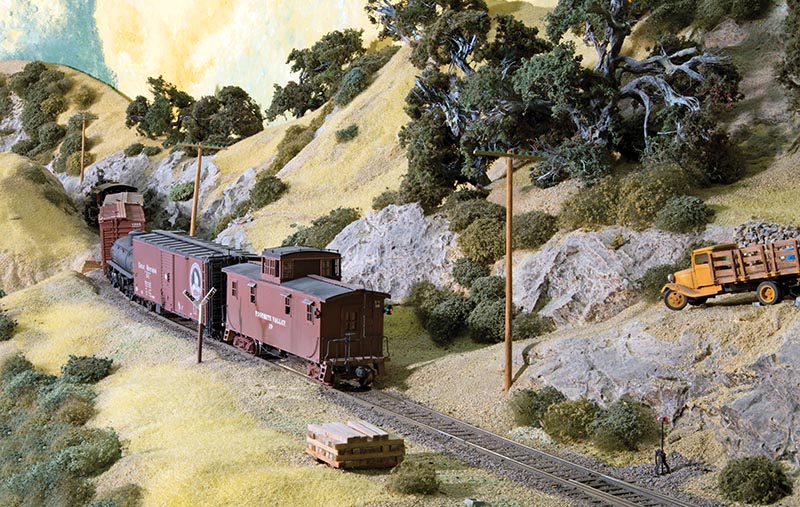 This westbound freight train is just passing the west Yard Limit sign for Emory. Caboose 19 was built by the railroad from a boxcar in 1925 and was reportedly very rough-riding. The model caboose was scratchbuilt and has working markers.

Effects of the Great Depression as well as increased competition from buses and automobiles forced the railroad into bankruptcy. Reorganized as the Yosemite Valley Railway in 1935, this only prolonged the inevitable. The Yosemite Sugar Pine Lumber Co. (which had taken over the Yosemite Lumber Co. in 1935) closed down in late 1942. Passenger service was provided by slow mixed trains, with delays resulting in the loss of the mail contract. The final nail in the coffin was the closure of the cement quarry in June 1944. The railroad petitioned for abandonment and the last scheduled run came on August 24, 1945. The railroad was scrapped soon after…