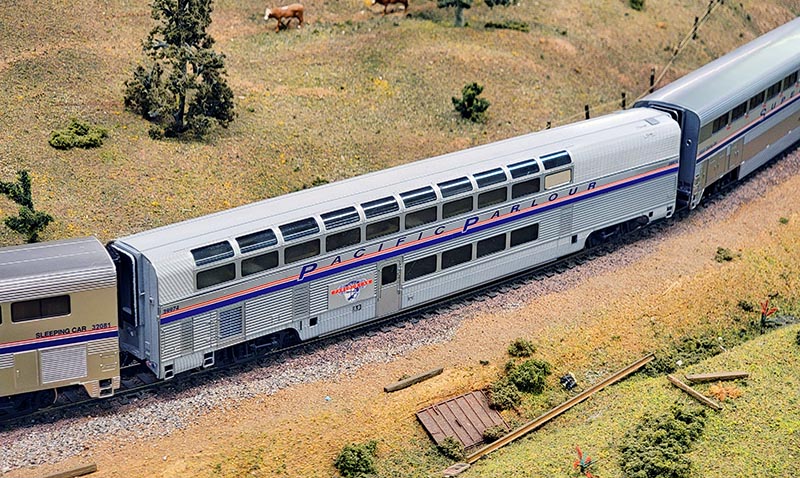 Sleeping car passengers are enjoying the views from Amtrak Pacific Parlour 39975 “Sonoma Valley” aboard the Coast Starlight. Like the prototype, the author built his model from a Santa Fe Hi-Level lounge car offered by Walthers in HO.

By Jacob Klatt/photos by the author except as noted

For more than 20 years the Pacific Parlour cars were a mainstay of Amtrak’s Coast Starlight service between Seattle and Los Angeles. These cars were only available to those with a sleeping car ticket and reminiscent of the days of first-class “named trains” that carried an extra fare. Passengers could enjoy the beauty of the Pacific Ocean and Cascade Mountain range from plush lounge seating below wraparound glass windows, a feature carried over onto the Superliner Sightseer Lounge cars. The Pacific Parlour featured amenities such as complimentary morning and afternoon beverage and snack service, champagne and wine tasting, along with a library and even a downstairs cinema for a short time.

The six lounge cars were originally built in 1956 by Budd (ATSF 575-580) for Santa Fe’s El Capitan and were conveyed to Amtrak in 1971, becoming AMTK 9970-9975. Each of the lounge cars could seat 60 people on the upper level, with the lower level occupied by larger restrooms, baggage storage, and snack bars and “coffee shop” lounges. In the early days of Amtrak, these cars could be found on the Sunset Limited and other trains as a stand-in for Superliner Sightseer Lounge cars.

During the 1980s, Amtrak was converting from steam heat to head-end power (HEP), and the six Hi-Level lounges were sent to Santa Fe’s Topeka, Kan., (not Amtrak’s Beech Grove) shops to be rebuilt. With the conversion came a big change to the diaphragms where they had to be raised to reach the height of the new Superliners. These cars earned their Phase III stripes during this conversion. When pressed into “Pacific Parlour” service they still wore the Phase III but soon received Phase IV stripes with script to match the brand new Superliner IIs being used on the Coast Starlight.

As Amtrak retired most of the former Santa Fe Hi-Level fleet in the 1990s, it looked like the lounges were finally headed for the scrapper. However, at the same time, Amtrak was attempting to give each train its own identity and offer increased services and amenities. During this time the Coast Starlight was getting revamped as a more first-class experience, like a cruise ship. Brian Rosenwald, Chief of Product Development, plucked the six former Santa Fe Budd Hi-Level lounge cars off the dead line at Beech Grove for exclusive use on the Coast Starlight. Between 1994 and 1995, Amtrak spent $3 million refurbishing the cars into modern first-class lounges.

In the late 2000s the cars again went in for another rebuild, this time with Phase VI colors to match the Superliner fleet. This time the cars were named for different wine regions along the route. Amtrak shop forces in Los Angeles and Beech Grove did what they could to keep the vintage rail cars running as they were prone to mechanical issues, with air conditioning problems being the biggest.

Finally, in February 2018 Amtrak announced the cars’ retirement, citing high maintenance costs. This came at a time when Amtrak was shedding itself of much of its legacy equipment such as the diners and baggage cars that were scheduled to be replaced with new Viewliner IIs, except the Pacific Parlours saw no replacement. It was truly an end of an era with these cars retiring, but thankfully Amtrak did see fit to give them a last hurrah, announcing dates of the cars’ final trips and even producing souvenirs celebrating the last runs. 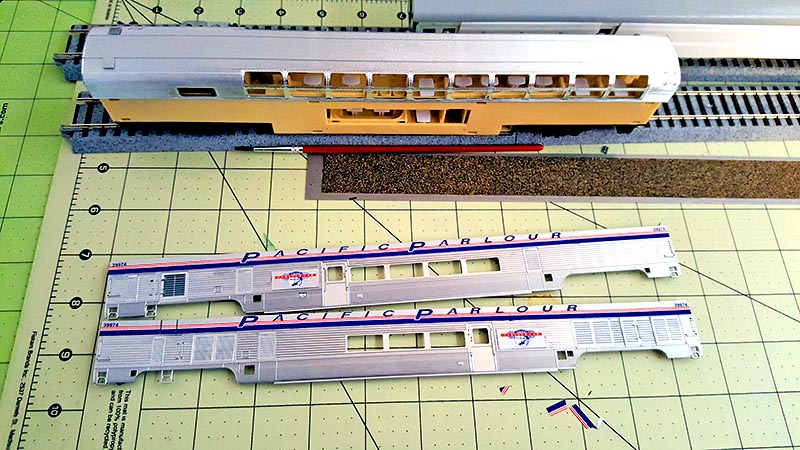 Jumping In
I spent several years out of the hobby but always said I would return if someone produced the Pacific Parlour cars or Amtrak California cars in HO. Previously being a “ready-to-run” modeler, I was often overwhelmed with the idea of any sort of custom modeling. I eventually got the courage after finding a sale on Walthers Proto Santa Fe Hi-Level cars and finally jumped back in, making my own HO scale Pacific Parlour car.

The first thing was to disassemble the car by removing the ends, sides and second level/roof. I then removed the windows and scraped out the glue Walthers uses to secure them in place. If not, this glue will seep and run all over the sides when they are being soaked and prepped for refinishing. With the windows off, it was time to remove the Amtrak Phase II striping. I left the car sides to soak in a bath of 91 percent isopropyl alcohol. The plating is impervious to the alcohol so the factory-applied stripes come right off without affecting the shiny “stainless steel.” I used a micro brush for some of the more stubborn areas…

Read the rest of this article in the May 2021 issue of Railroad Model Craftsman! Subscribe Today!