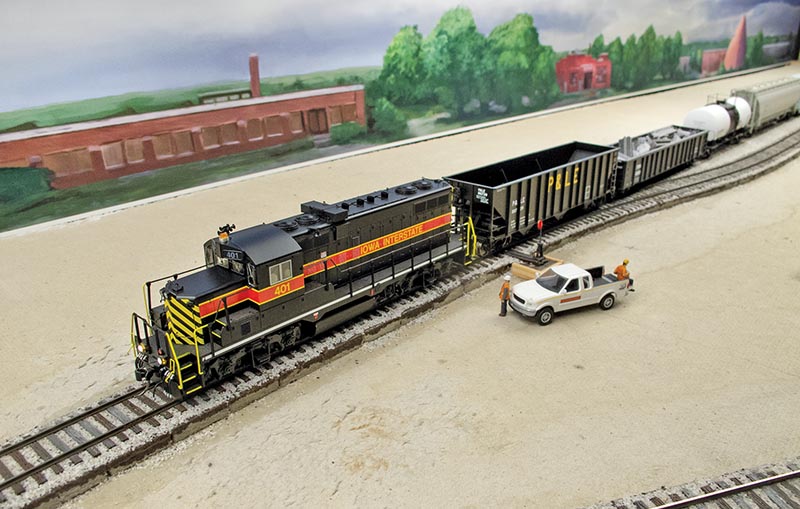 GP10 401 moves down the Iowa Interstate’s Milan Branch through Rock Island, Ill. Scenery is sparse along this section of the layout, but follow along as this new series will track the layout build to completion. —Scott Thornton photo 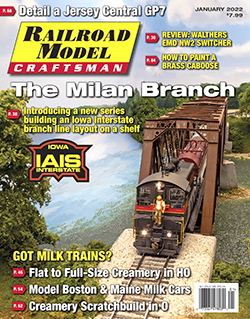 By Scott Thornton/photos by the author

Welcome to a new series on the planning and construction of a small, yet very diversified, prototype branch line – Iowa Interstate’s Milan Branch (Milan is pronounced “my-lon”). In this series I will be presenting the history of the branch, its location and the industries it serves, and my modeling approach to building a layout that represents the branch in HO scale. I will cover a variety of modeling topics including an overview of the current state of the layout, how I approached benchwork and staging, a number of different scenic processes, and some unique and hopefully innovative approaches to ambient and automated trackside sound, layout lighting, and extending the operating possibilities and play value of a small layout.

The Beginnings
The Milan Branch is operated by the Iowa Interstate Railroad (IAIS) which began operations in November 1984. The IAIS sprang from the ashes of the once-mighty Rock Island Lines, and it operates on the former Rock Island main line from Blue Island, Ill., to Council Bluffs, Iowa. The railroad uses trackage rights over Metra from Blue Island to Joliet, Ill., and over CSX Transportation from Joliet to milepost 95 at North Utica, Ill. 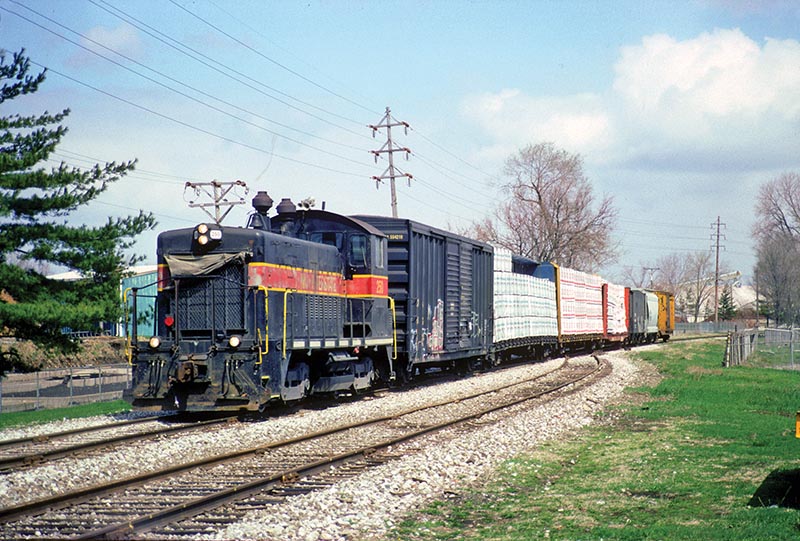 ABOVE: With SW1200 250 in the lead, the Rock Island Switcher (RISW) trundles down the Milan Branch passing the Turnout Runaround at 13th Ave. in Rock Island on April 16, 2001.

In addition, the line operates several extensions and branch lines. One extension runs from Bureau, Ill., to Peoria, Ill.; another from South Amana, Iowa (near Homestead), to Cedar Rapids, Iowa (via the Cedar Rapids & Iowa City’s former Milwaukee Road secondary line); and the branch lines – the Grimes Line from Des Moines to Urbandale, Iowa, and the Milan Branch from Rock Island to Milan, Ill. 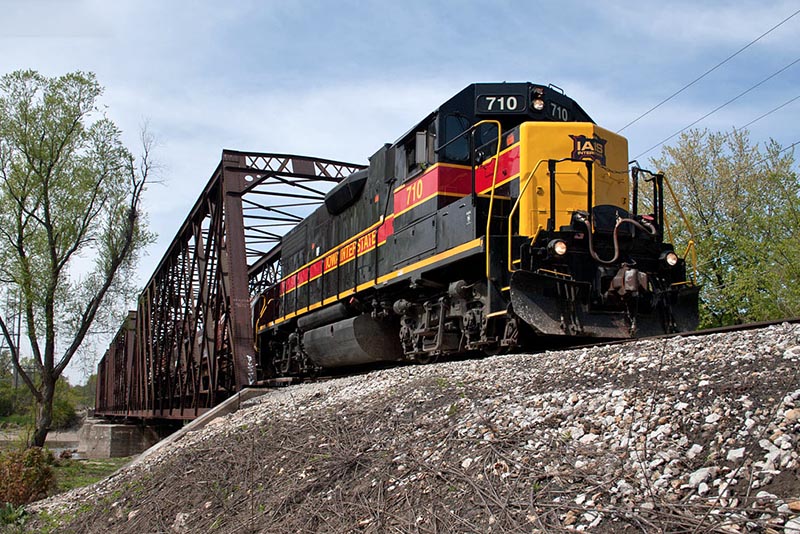 ABOVE: Train RISW exits the Rock River bridge with loads of coil steel for Steel Warehouse on April 12, 2012.

The railroad began operations with a ragtag fleet of former Illinois Central (IC) EMD GP8s and GP10s that had been rebuilt at IC’s Paducah, Ky., shops. During the 1990s, second- and third-generation EMDs were added to the roster, including an SW1200, GP38s, and GP38ACs. They even rostered an Alco C420, an Alco RS36, and a trio of former Providence & Worcester M420Rs. In 2004, the railroad purchased a fleet of 22 rebuilt and repainted EMD GP38-2s to replace the worn-out Paducah rebuilds, GP38s, and Alco/MLW locomotives.

In 2008, management decided to make a significant investment in motive power and purchased 12 new General Electric ES44ACs to handle the growing traffic, allowing the remaining second-generation EMDs to be retired and using the fleet of GP38-2s to take over the majority of switching and local service duties. Subsequent orders from GE have brought an additional eight ES44ACs on board to bring the total to 20. In addition to the ES44ACs, the railroad currently owns four EMD SD38-2s, 18 of the 22 EMD GP38-2s, one EMD GP38, and two slugs modified from retired EMD GP8s. 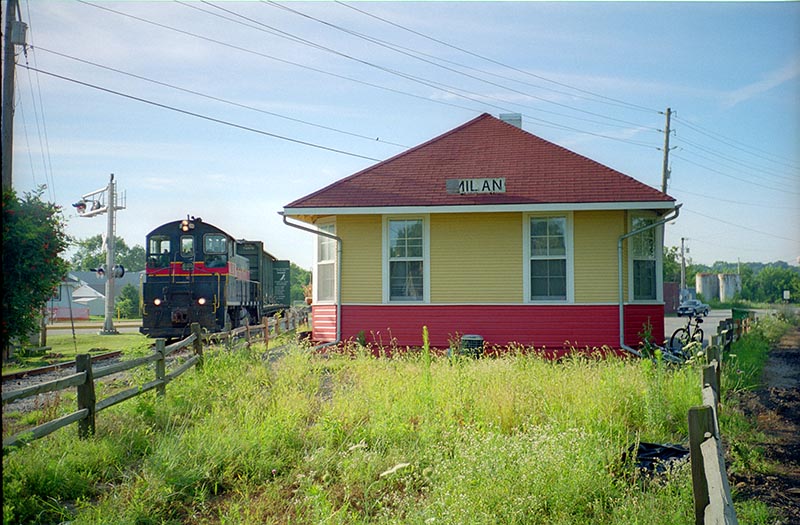 ABOVE: Passing the depot in Milan, August 2000.

The Milan Branch
The Milan Branch was once two through routes which converged at Milan from both the east and west to reach downtown Rock Island. The Rock Island Southern (RIS) was built from Milan to Monmouth, as a combination electrified interurban and steam road. This route ran west and south from Milan. The RIS was steadily cut back from its southern route in the late 1920s and was eventually bought by the Chicago, Rock Island & Pacific (CRI&P) in the 1950s. The Rock Island & Peoria (RI&P) ran east and south from Milan to its namesake of Peoria, Ill. The RI&P originally passed through Coal Valley, Ill., but tracks were eliminated in the 1940s when they began using trackage rights on the Chicago, Burlington and Quincy from Silvis to Orion, Ill., to reach Peoria.

The CRI&P operated the Milan Branch until the railroad shutdown in 1980. Following the Rock Island’s shut down, the Davenport, Rock Island & Northwestern (the “Dri-Line”) continued to service the branch until the Iowa Interstate assumed control in 1984… 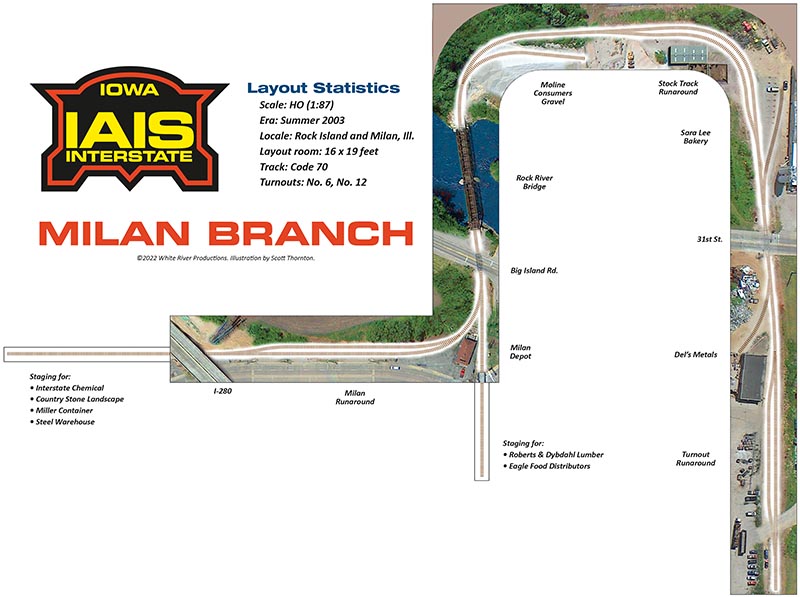 Read the rest of this article in the January 2022 issue of Railroad Model Craftsman. Subscribe Today!