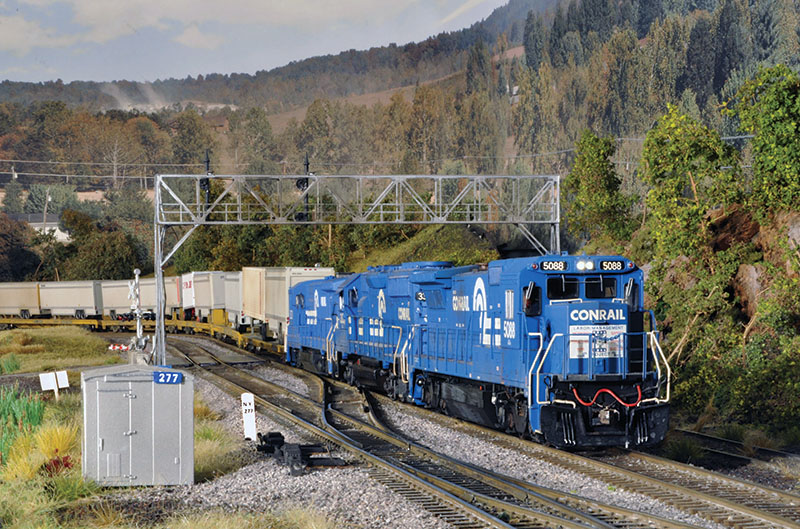 The Chicago Line has long been an artery for high-speed intermodal trains. Conrail Train TV-24, a Chicago-to-Boston piggyback train, roars into the rising sun as it passes through CP 277. New York Central standard four-track signal bridges remain to span just the two main tracks, but the iconic hardware built by General Railway Signal remains in service across the Onondaga Cutoff.

By Dave Abeles/photos by the author

The grandeur of the past is everywhere in the northeastern U.S. Railroads, long part of the transportation scene, weave through the region like arteries from the heart. Rival railroads with their crisscrossing main lines ran through the area where I grew up, reduced to just one or two tracks in some areas and sadly, rendered invisible in others. Logos of these fallen flags are visible behind rust and grime on bridges, abutments, and on old railroad buildings. Mileposts measure the distance in a haunted manner, counting from long-abandoned waterfront terminals that used to run in a solid phalanx of rail along the Hudson River, with a battery of car floats, terminals, and yards serving New York City. Railroad companies that built these routes had personality and swagger and phenomenal wealth, and they showed it off every chance they had.

Modelers are well aware of the passage of time, and railroad modelers are particularly tuned to the call of the past: railroads, as owners of their infrastructure, must maintain it themselves and the lineage of what one historian has labeled “metropolitan corridors” is plainly visible to those who look. Railfans who remember the “glory days” sometimes hold scorn for the modern scene and especially Conrail, the railroad created as part of a federal bailout to save rail service in the northeast. In 1976, the new, big blue giant callously replaced seven favorite fallen flags. But the trains kept on moving: nothing stays the same. My Onondaga Cutoff is a tribute to Conrail operations in the 1990s, an era when everything was changing, and much of it for the better. 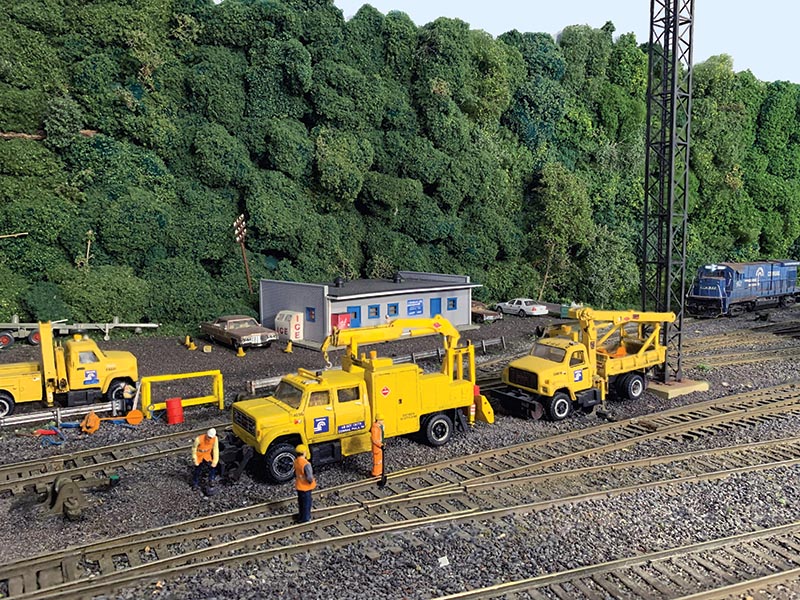 Conrail Track Department trucks are parked along the yard ladders at Onondaga Yard as the crew prepares to replace a switch frog. Modeling maintenance scenes adds to the flavor and the challenge of operating sessions. The trucks are custom resin-cabs and commercial frames, built and painted by Mark Jacob, then decaled and weathered by the author.

Growin’ Up Conrail
For kids of the 1980s, the bright blue hood units hauling long trains to far-off places fascinated us. We’d beg our parents for a ride to the tracks and sit, waiting to take in all the action. By the mid-80s, time and technology had eliminated the need for towers and depots, so there were few workers to befriend and learn from. Instead, we waited along the main line for approach-lit signals to light up or for the Uniden Bearcat scanner to crackle to life with cryptic radio traffic. Anticipation could carry us for hours while we waited, and our euphoric excitement when a headlight appeared was just as great as if the train had been led by a steam engine in a different era.

During my childhood, several weekends during the year were spent on family visits to central New York’s Finger Lakes region. We would stay with family in Marcellus or Skaneateles, and spend time with cousins, aunts, and uncles on the lakes and in the woods. There was an aura to the region that fascinated me and that fulfilled a yearning in my heart for big skies and rural beauty, for community and family and for the camaraderie that they shared.

My uncles, knowing my fascination with railroads from a young age, would give my mom a break and take my brother and me and a pack of cousins for a drive up to see the railroad. As we drew closer to the city of Syracuse, my adrenaline would build. We’d come around the corner eastbound on State Route 5, right where the road passes the New York State Fairgrounds in Solvay, and as we stepped onto the bridge, a different sort of railroad was waiting. 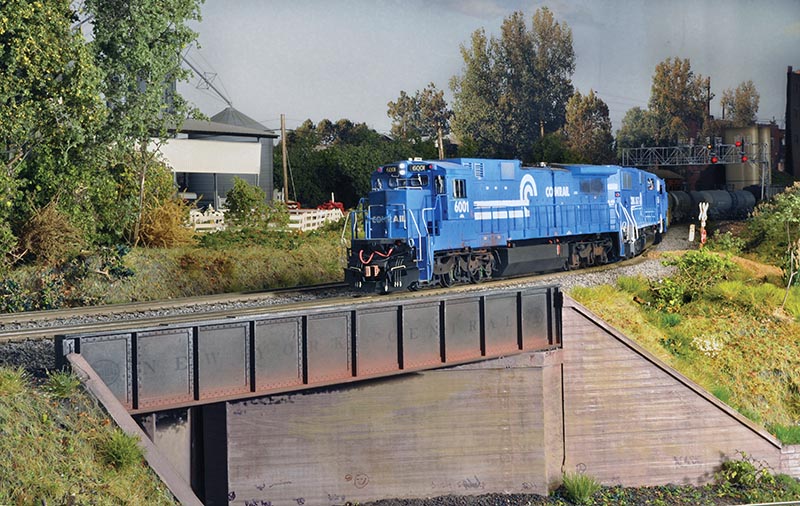 Conrail C39-8 6019, fresh off a lease to the SP, leads Train SENF (Selkirk to Niagara Falls, N.Y.) west through Central New York dairy farm country. Including former relics of the old New York Central, like the undergrade bridge at mile 279.40, tie the route to its history.

As the view opened east and west, four tracks on a long tangent dominated the view and my youthful senses. Deep-ballasted main line tracks and controlled sidings stretched miles in each direction. Searchlight signals high on multiple-track bridges stood guard and told us this was real railroading. Industry dotted the eastern horizon and nothing but fast running was the rule to the west. The New York Central’s famed “Water Level Route” was a far cry from the winding single-track lines in the hills of northwestern New Jersey where we called home. This was Conrail’s Chicago Line, a vital artery of commerce stretching across New York State, a critical piece of infrastructure tied to the nation’s economy.

The weekend would pass, and my family would return to New Jersey after our time with relatives, but the powerful memory of time on Conrail’s Chicago Line remained. The famous NYC oval logo on bridges and facilities, the concrete “tombstone” mileposts, the wide four-track signal bridges, and indeed, the dozens of long intermodal trains all told me where I had been. The Albany Division in the late 1980s and 1990s was Conrail’s primary freight route between Chicago and New York City. Circumstance helped me to choose Syracuse University for my college years and this allowed me even more time for exploration and immersing myself in the region’s history…

Read the rest of this story in the September 2020 issue of Railroad Model Craftsman! Subscribe Today!