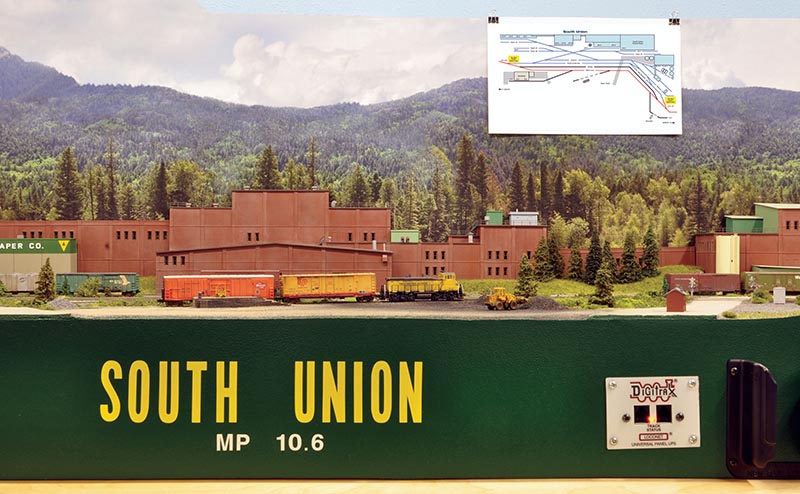 A switcher pulls a couple cars from the team track at South Union on the Tenino Western Railroad. A shelf just below the fascia provides a convenient place to sort paperwork.

Operating a model railroad is fun, but setting up for operations the very first time can be a daunting task. Some people like running trains in an endless circle, while others prefer the challenges associated with sorting and switching cars. I fall somewhere in between that spectrum and overall just enjoy seeing my N scale Tenino Western Railroad come to life (see the February 2020 issue of RMC). Generally, I think the longer someone has been in the hobby, the more they yearn for operations.

To me, operations give a model railroad a purpose and help keep us intrigued. Every car has a specific destination, and how it gets from “Point A” to “Point B” depends on a multitude of factors including crews working together within a given system. There are a variety of ways to move freight on a model railroad. For example, switch lists, color-coded tabs, computer-generated operations, car cards and waybills, or simply swapping cars one for one, just to name a few. I settled on “enhanced” car cards with four-cycle waybills. But before we get into how I enhanced my operations on the TWRR, let’s first talk about setting up a layout for operation. 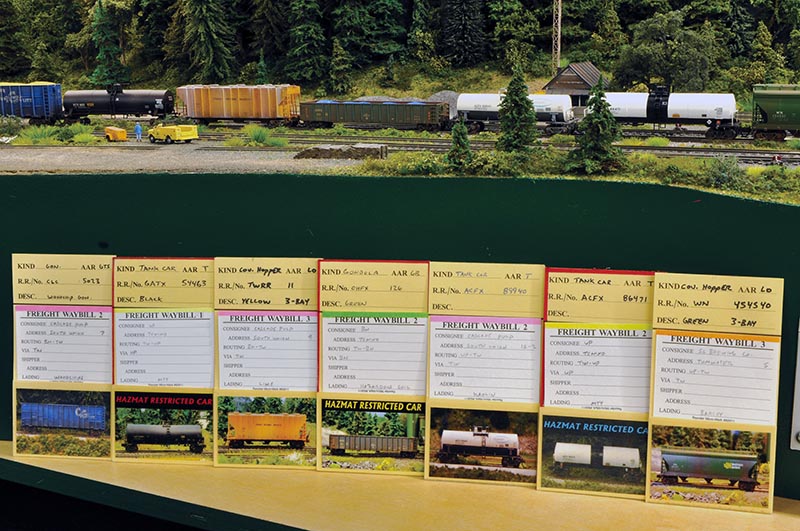 A southbound manifest train rolls out of Lake Yard under the watchful eye of a car inspector. The train’s make-up and paperwork are in compliance and buffer cars have been added to the train.

Label Everything
Because we are trying to mimic prototype operation, that’s the best place to look for ideas. Like the prototype, I first began by labeleing everything on the layout. I began by drawing a schematic for each town or area of operation. I did this in Microsoft PowerPoint. This shows all the pertinent information needed by the crews; a track diagram with track numbers, industry names, customer spots, door numbers, mileposts, geographic direction, etc. Tracks are usually numbered from the main line outward. For example, the track closest to the main line would be Track 1, and so on.

To make things more visible for my operators, I label the fascia with important information like milepost, control points, and yard limits. I used 1” vinyl letters and numbers for mileposts, 3” letters for town names, and ¼” letters for less important things like rivers and street names.

For my classification and staging yards, I created the schematics on a piece of sheet metal and used magnet markers for designated trains. I accomplished this with the Micro-Mark Dispatcher Kit (no. 83480). My yard crews now have complete flexibility over which tracks they want to use for which trains. 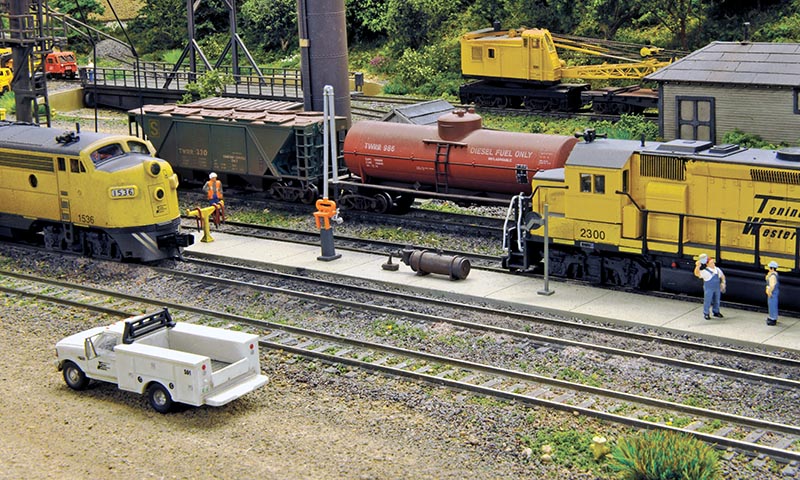 Depending on how you set up your waybills some cars only need two cycles, one to come on the layout and one to come off. For example, the sand car and fuel car in the engine terminal rarely see any movement. I have a total of four company service cars assigned to the diesel facility so they do not move unless a replacement car arrives.

I also used a Micro-Mark Car Routing Starter Pack (no. 82916) for operations. This includes everything you need to get started; car cards, waybills, locomotive/passenger/caboose cards, bad order cards, and some three-compartment car card boxes. All the items in the starter pack can be purchased individually as well.

For the car card boxes, I labeled the compartments for pick up, hold, and set-out. If a car is ready for pick-up it can be found in the Pick-Up (“P/U”) box. If a car is being held for some reason, like loading or unloading, it can be found in the HOLD box. When a car is set out by a crew it goes in the Set-Out (“S/O”) box. The only person who actually handles the waybill (flips them) is the trainmaster between sessions/trains. Micro -Mark also makes five-compartment car card boxes, which are great for multiple tracks like classification or staging yards.

Crews need a place to comfortably sort paperwork, including switch lists and track warrants. I found the best solution was to add shelving along the front of the layout at each town and yard. Throttle pockets and cup holders help uncluttler the layout and make a more comfortable environment for the crew…

Read the rest of this article in the September 2020 issue of Railroad Model Craftsman! Subscribe Today!