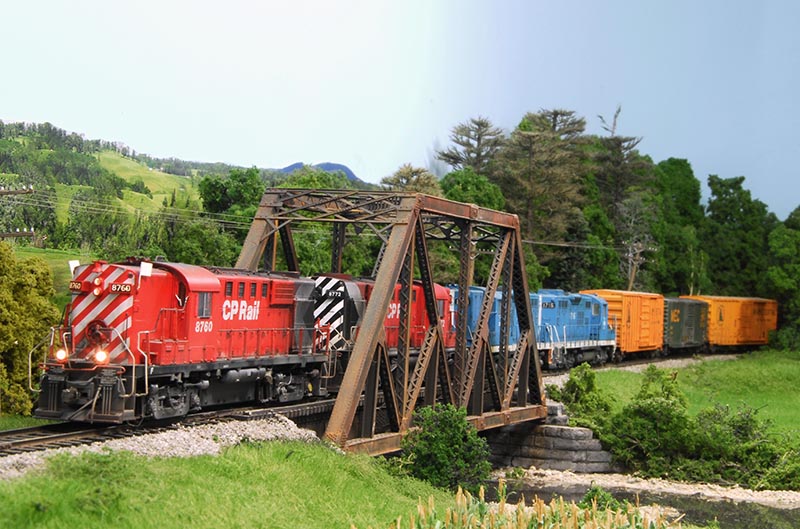 With white flags flying, a northbound extra led by a pair of RS-18s and Boston & Maine GP-9s crosses the Passumpsic River south of Orleans, Vermont, sometime in the spring of 1980. 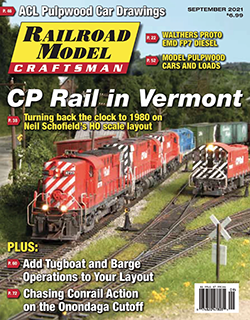 By Neil Schofield/photos by the author

“For many, the only evidence of the Canadian Pacific in Vermont is the unexpected presence of an RS2 gleaming in a fresh coat of Action Red idling the day away at St. Johnsbury, or a similarly attired Montreal-built C424 tucked into a Boston & Maine lash-up headed north out of East Deerfield. Intermixing, as it does, with the B&M, the true extent of CP Rail in Vermont and New England is difficult to determine by firsthand observation. The whole operation is really quite simple, however, once the run-through agreements are sorted out.

Plainly stated, CP Rail has a line from Montreal and a line from Quebec City dropping across the border into Newport, Vt., where one line heads southward through St. Johnsbury to connect with Boston & Maine’s Connecticut River Line at Wells River, Vt. Any CP power operating south of there is doing so as part of a B&M pooling agreement, the southern end of which is Springfield, Mass. This gives CP Rail about 95 route miles of track in Vermont which provides a freight bridge route between Canada and southern and eastern New England…” 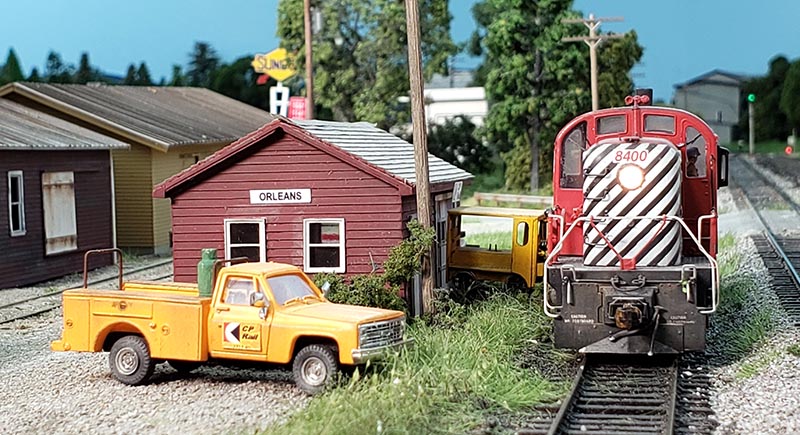 ABOVE: As the late afternoon sun sets in Orleans, Canadian Pacific Alco RS-2 8400 on the “St. J. Turn” waits on the siding for northbound Train 917, which has a green signal for its final run to Newport, 10 miles away. 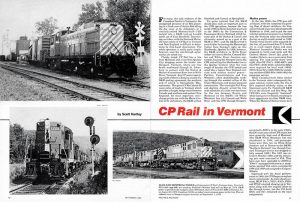 So began Scott Hartley’s article “CP Rail in Vermont” which appeared in the September 1980 issue of Railfan & Railroad. Growing up, I coveted those occasional articles on the region in the railroad press, and that article still serves as an inspiration to me for modeling CP’s operations. Recreating a model railroad based on the story of the prototype meant studying Mr. Hartley’s article to the point of literally wearing the magazine out. It also gave me an appreciation for the effort and patience of all the photographers who spent time in the 1970s and 1980s capturing those classic scenes that inspire me today.

For many model railroaders, our passion for a particular railroad or region was sparked by something tied to our youth. Those passions and interests grow over time to form the basis for what we choose to model as adults. For me, it was the railroads of Vermont. There was something about the rural nature and colorful railroads that followed the Connecticut River from north to south, or the bucolic short lines that struggled to survive in a region not known to have a strong industrial base.

It was for those reasons that I came to love the region, particularly Canadian Pacific’s (better known then as CP Rail) operations in the Northeast Kingdom, a remote area of rolling hills, agriculture, and lots of red barns to complement the CP Rail’s “Multimark” scheme of the 1970s through 1990s. Even before I was a teenager, I remember being fascinated by articles written about the area by well-known photographers Ben Bachman, Scott Hartley, and Robert Willoughby Jones, to name a few. Their photographs and written stories instilled an attraction and fascination that I’ve yet to outgrow some 40 years later, despite so many changes to railroad operations in the region. 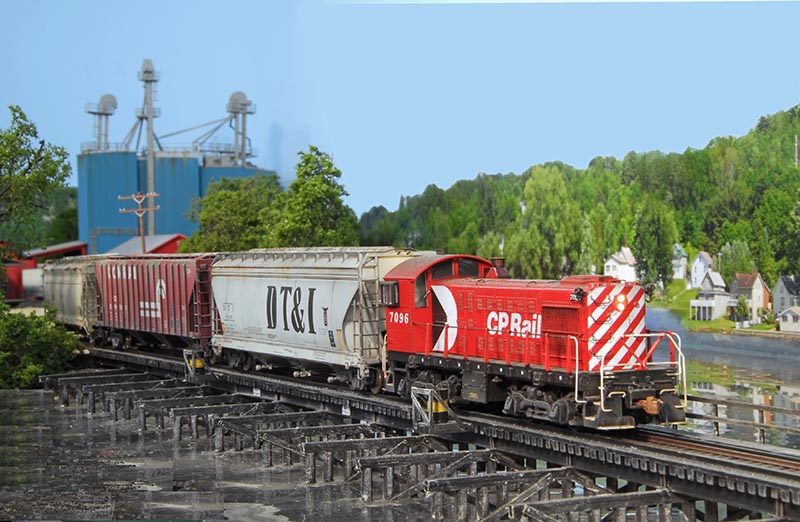 ABOVE: In what was once a daily occurrence, S-2 7096 switches out Poulin Grain on the wooden trestle spanning the inner bay of Lake Memphremagog in Newport.

Quite remarkably, as I write this article in 2021, CP Rail has returned to Vermont after a 20-year hiatus, though it isn’t quite the same as it was during its heyday 40 to 50 years ago. Gone are the days of joint run-through operations with Boston & Maine GP-18s, GP-9s, or GP-7s mixed in with CP’s Montreal Locomotive Works (MLW) C424s and RS-18s; or the classic American Locomotive Company (Alco) RS-2s and S-2s, that were strictly assigned to operations in Vermont and across the International of Maine Division. It was these locomotives that came to symbolize CP’s operations in Vermont during the 1960s and 1970s, stationed in the railroad towns of St. Johnsbury, Newport, or Richford. By the early 1980s, these 30-year-old workhorses were running on borrowed time and, by 1983, retirement would come, replaced by five rebuilt and chop-nose RS-18 locomotives assigned specifically to Newport beginning in 1980. It was for that reason I chose to model 1980 to 1981, allowing the rebuilt RS-18s to share the Newport ready tracks with the venerable Alcos for a few short years. Of course, there were still plenty of high-nose RS-18s forming the backbone of run-through operations along with C424s and B&M’s fleet of EMD Geeps.

From a young railfan’s perspective, Alco/MLW and EMD diesels in several paint schemes running against beautiful lush green backdrops were enough to hook me into a lifelong passion for railroads of the Green Mountain State. Fortunately, those early articles in the railfan magazines made it appear far easier to catch and photograph trains than it was in reality, as night operations and limited traffic made every photo a treasured gem from the past. Thankfully, I’ve come up with a solution to make things a bit easier by recreating those operations in the basement. 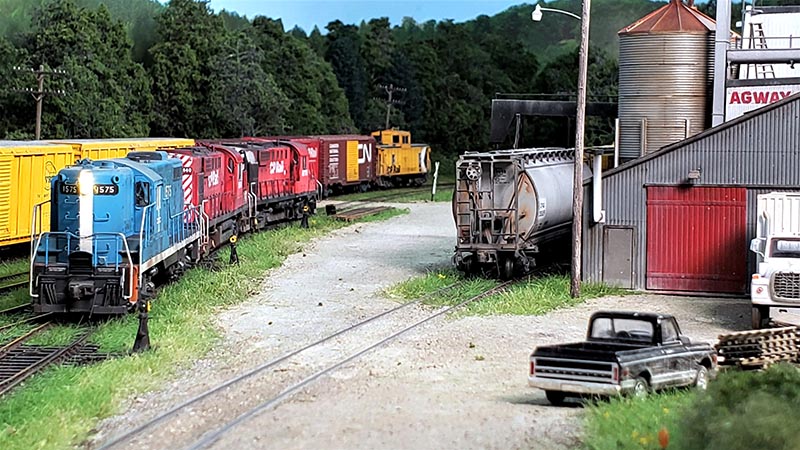 ABOVE: A set of power just arrived off run-through Train 917 eases past the Agway Feed mill at the south end of Newport Yard and toward the engine facility for servicing.

To better understand operations on CP in Vermont, let us begin back in the late 1960s when CP Rail and Boston & Maine began running a joint through train on the Connecticut River Line between Springfield, Mass., and Montreal, Que. The train was primarily comprised of bridge traffic from New England and points farther south through their connections with Penn Central and later Conrail at Springfield, extending northward to Montreal. The majority of this traffic was paper products along with local agricultural traffic. Additional traffic was also added from the Maine Central connection at St. Johnsbury, Vt., and run as a separate freight until the mid-1970s and often as extras into the 1980s. While the CP’s Lyndonville and Newport Subdivisions weren’t nearly as busy as the lines farther south, the combination of red Alcos, blue Geeps and lush green mountains are the perfect subject for a model railroad. There was also a fair amount of online traffic in those days, enough to keep several local freights busy.

Newport was the heart of operations in Vermont, with an engine facility and yard located south of downtown along Lake Memphremagog. It was the southern end of the Newport Subdivision that extended south from CP’s International of Maine Division at Farnham, Que., and served as a classification point for traffic coming up from southern New England via MEC at St. Johnsbury. In addition, traffic from the Quebec Central line that ran down from Sherbrooke, Que., was classified and sent south. The Lyndonville Sub continued south from Newport to Wells River, Vt., and then onto B&M-owned track to White River Junction and eventually to Springfield, Mass….

Read the rest of this article in the September 2021 issue of Railroad Model Craftsman. Subscribe Today!