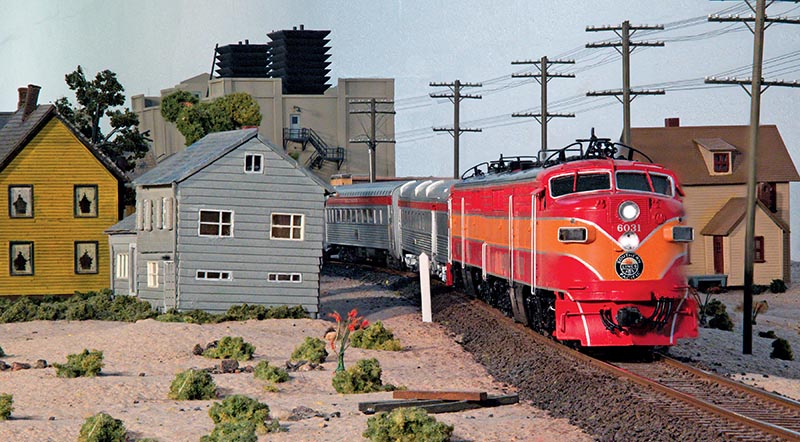 A pair of Southern Pacific Alco PA’s have just passed the Crystal Ice plant on the outskirts of Mesa, Arizona, with a westward Sunset Limited. These locomotives and this livery survive in 1967 because of the railroad’s alternate history. 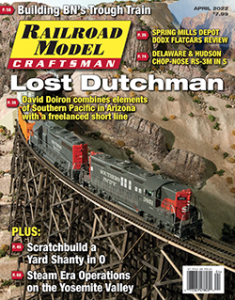 I have enjoyed a lifelong interest in trains. My grandfather (on my mother’s side) took me all over Southeast Texas in search of interesting operations when I would come to visit. We saw logging railroads, an interlocking tower, a roundhouse, and Southern Pacific’s streamlined Sunset Limited. But the most vivid impressions he left with me were the stories he told and his genuine affection for the 35 years he worked on the SP.

My paternal grandmother’s house in Uvalde, Texas, was right alongside the International & Great Northern, a subsidiary of Missouri Pacific. The line saw little traffic, but Grandma told me we were going to see the “real” trains at the SP depot. She told me to be home before dark, and I was in heaven. I learned about train orders, section maintenance, waybills, livestock loading, produce packing, and what the various kinds of freight cars were. Those summers I pretty much got up in the morning and spent the day at the depot. The Argonaut had a regular engineer who was friendly. When I told him that I would be riding his train the next week, he told me to meet him at the cab with my ticket in hand. That’s how I got my first cab ride! 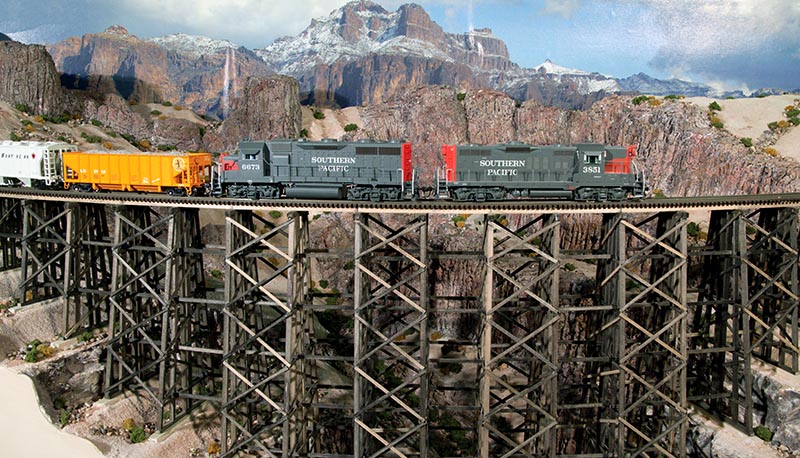 Two Geeps are heading north over the scratchbuilt Heartache Canyon trestle on the Lost Dutchman. The grade here is 1 percent, so the Geeps are working hard to keep their train moving.

One day in 1953, I visited our local hobby shop with the intention of purchasing a model airplane kit. I was mesmerized by the display of Atlas HO scale Snap-Track, and instead spent the 50 cents in my pocket on my first two pieces of track. It looked much more realistic than my neighbor’s three-rail Lionel trains.

That Christmas I got a Mantua set with an 0-6-0T, a flat, a gondola, and a bobber caboose. It even had the same Atlas track I had admired. Switches and cars were added and I began setting out and picking up cars on the bedroom floor. I still have and cherish the little 0-6-0T.
Our family later moved to Arizona, still in SP territory. I found a hobby shop in Mesa and began adding Athearn kits and TruScale track to my layout. I also discovered an article about operations by Ed Ravenscroft. There were now four of us in my circle of friends and we had glorious fun. We even started a model railroad club that still exists in Scottsdale. My lockermate in high school was Don DeHart. It turned out his father was also Don DeHart, the Mesa station agent! From then on I spent as much time as I could down at the depot. Don Sr. taught me how to tie strings into train order loops, and so much more. 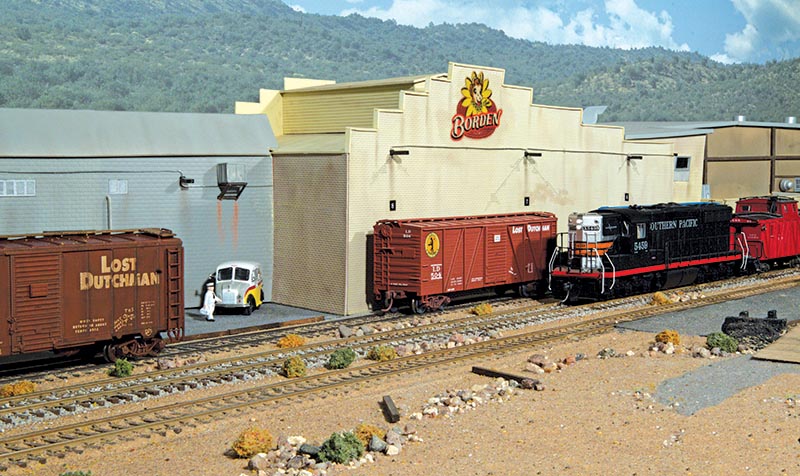 An ex-SP Geep in the “Black Widow” paint scheme works the creamery on the Creamery Branch. The building was scratch-built from photographs and is nearly full-size.

Two layouts later, school started getting in the way (along with cars and girls). Working my way through college, I later entered pilot training with the Air Force. I eventually got a job with an airline and returned to Arizona. To my surprise, Ed Ravenscroft had also moved there. I became a regular operator and eventually the manager of his model railroad for repairs, staging, and crew coordination for 10 years.
Working for the airlines, I was able to meet model railroaders from all over the country and also work on and operate their layouts. When I retired I figured it was time for me to stop just working on everyone else’s railroad and get started on my own. I bought the run-down house next door, demolished it, dug a 4,400 sq. ft. basement in its place, and built an extension of my home over the top.

The Layout
Becoming my seventh layout, construction began in 2009. My main modeling interest is prototypical operation with guest operators, so this layout emphasizes those aspects. My HO scale model railroad features the operations of the Southern Pacific between Chandler and Phoenix, and the fictional Lost Dutchman tourist line which connects at Tempe. 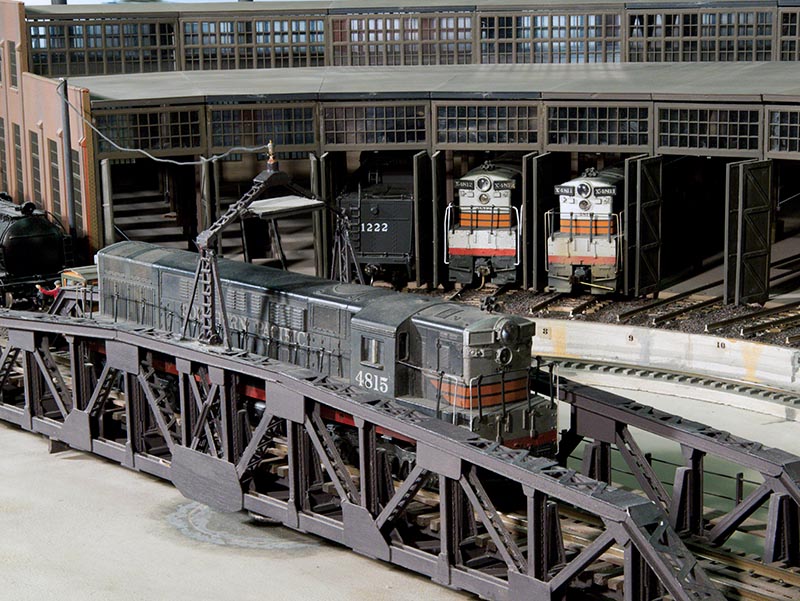 The 12-stall roundhouse at Tempe serves both diesel and preserved steam locomotives. A Fairbanks-Morse Train Master takes a spin on the turntable.

I model August 1967, and cotton, citrus, cattle, and copper traffic reign supreme. Locations modeled on the SP line include Tovrea, Tempe, Normal, Mesa, Chandler, with Phoenix and Tucson represented by staging. The Kyrene, Terrace, and Creamery branches all connected at Tempe. In our alternate history, SP spun off the branches as well as the Tempe engine facility to the Lost Dutchman Railroad.

Lost Dutchman is a bridge line and tourist railroad owned by an eccentric Cajun billionaire with minority interest held by both the Southern Pacific and Great Northern. Equipment from both lines predominates. From the connection with the SP in Tempe, the modeled portion of the line runs northward to the staging yard at Two Guns. The branches have been rationalized and freight traffic further developed so that the line is self-supporting. The tourist operation is the special interest of the short line’s owner. As a result, a significant amount of “heritage” equipment is preserved and operated. Steam engines from a handful of roads are kept at the Tempe roundhouse and there are historic freight and passenger car paint schemes in service as well. But at the end of the day the railroad survives on freight…

Read the rest of this article in the April 2022 issue of Railroad Model Craftsman. Subscribe Today!