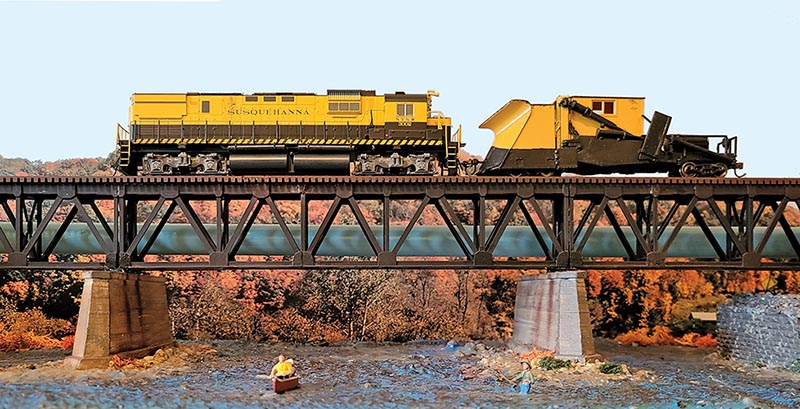 New York, Susquehanna & Western Alco C-430 3006 hauls a Jordan Spreader to the next work site, crossing the Oakland Trestle over the Ramapo River sometime in the mid-1980s.

The first time I can remember seeing a train was in the summer of 1988 in Butler, N.J. My family and I were returning from a family outing when the crossing at Park Place had just been activated by a local freight pausing for its lunch stop. My father slowed down so we could get a look at the faded New York, Susquehanna & Western GP18 pulling a pair of Chessie System hoppers along with a pair of tank cars. As we eased alongside the train, you could smell the oil, feel the heat and feel the vibration from the sounds of the now familiar EMD 567 as the engine accelerated the freight back to Little Ferry. I was hooked.

The Susquehanna evolved significantly since Walter Rich saved the railroad from the brink of abandonment in 1980, rebuilt from the ground up, and reconnected as an alternative through route hosting double-stack container trains destined for the New York metro area. While “Susie-Q” no longer handles container traffic, the railroad remains a viable route for freight traveling to and from the Southern Tier and beyond. 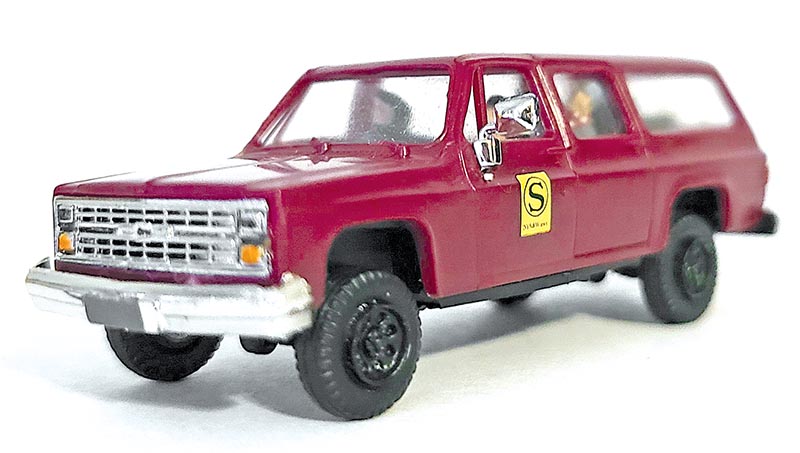 Model railroading is more than locomotives and rolling stock; It is a sense of time and place. For me, the late 1980s and specifically the fall of 1986 on Susquehanna in northern New Jersey is the setting for my modest 10×10 HO scale layout. It is a time of my earliest childhood memories that involved a wild variety of motive power pulling stack trains, ballast trains, and passenger extras, all while dodging tie gangs, bridge crews, and other work trains on a right of way that was on death’s doorstep a few years earlier.

This stunning development in railroad history also brought out just about every railfan on the Eastern Seaboard resulting in an incredible amount of reference material for every little detail I may need. During this period of transition, it wasn’t uncommon to photograph power from Guilford (including Delaware & Hudson; Boston & Maine; and Maine Central) and CSX (Chessie System and Seaboard System), alongside Susquehanna’s own eclectic fleet of Alco Centuries, first generation EMDs, ex-Burlington Northern SD45s and F45s, and even three leased Santa Fe rebuilt CF7s hauling double-stack container and unit ballast trains. 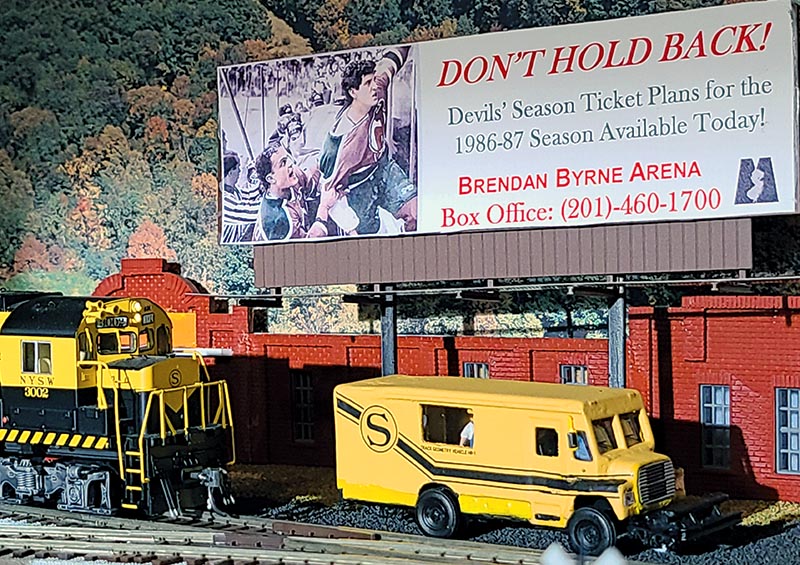 All of this variety does make for some challenges. While finding motive power and rolling stock is relatively easy, finding accurate motor vehicles, buildings and signs to get the “feel” of New Jersey in 1986 is surprisingly difficult. It was time to get creative.

As the railroad resurrected itself, motorists were warned by 30×30 signs affixed to crossing masts proclaiming “notice: trains are now using this crossing.” With some help from NYS&W employee William Nelson and Ryan Distad of Small Scale Innovative, these signs were recreated to warn my HO scale motorists. As they wait for the seemingly endless line of Sea-Land double-stack cars to pass they can gaze at a heavily modified BLMA billboard with a custom advertisement made by my wife Meghann. The billboard is printed on heavy cardstock and features an advertisement for the New Jersey Devils hockey team, and features the correct phone number, logo, and time appropriate name for the Brendan Byrne Arena (now known as the Izod Center) in the Meadowlands. 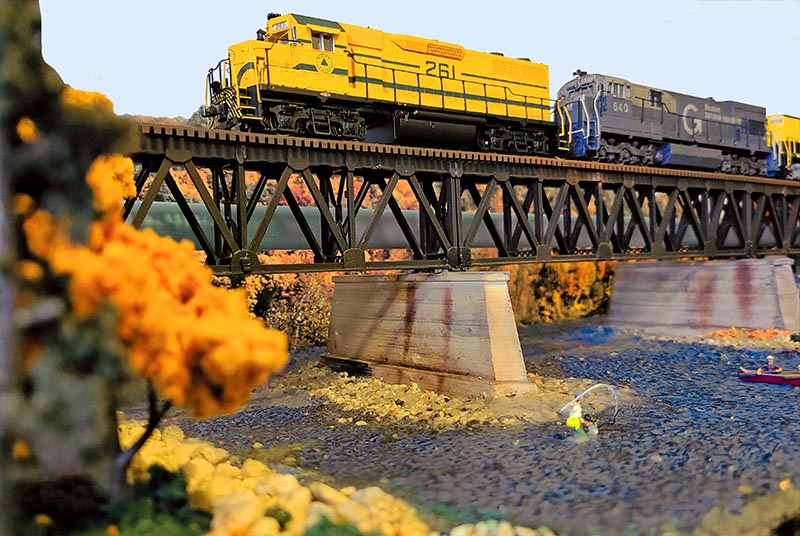 Motor vehicles of this era are scarce and sometimes relatively expensive, but some aggressive eBay and train show hunting have helped. Busch and Trident offer several nice examples of 1970s and 1980s motor vehicles. I add company logos, headlight and taillight details, license plates, and drivers to enhance the realism. A few of these models and a heavily modified Bachmann “Trackster” round out the railroad’s MOW fleet. These trucks were a common sight trackside as various parts of the railroad were being pulled from the weeds and rebuilt for heavier traffic.

All of these memories finally started to evolve into a layout in the winter of 2017. My wife and I had just moved into our condo and I was given the task of assembling a seemingly endless number of furniture kits. Several days later I was left in my layout room with a mountain of cardboard, and shelving units holding boxes upon boxes of HO scale trains. The wheels began to turn. I had constructed a model of Oakland Trestle over the Ramapo River several years earlier, but never had it on a layout. I got the idea of building a layout around the bridge with the idea that, if and when we were to move again, the signature scene could be salvaged.

The concept evolved into a 2×4 diorama with just the trestle, river, and its banks. Suddenly, I was trackside on the Susquehanna in 1986 again! I staged some photos and began to share my fully scenicked scene on various railroad and modeling Facebook groups. An outpouring of “atta boys” and “likes” came my way and with it comments like, “Great bridge. Would love to see the rest of the layout.”

With that positive encouragement, I guess it’s time I got to work…

This article appeared in the October 2020 issue of Railroad Model Craftsman. Subscribe today!