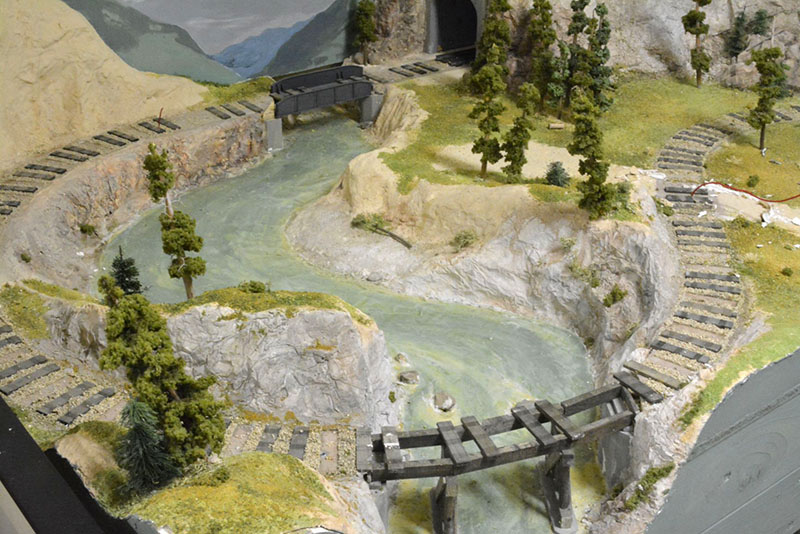 The author turned an old three-rail layout into an HO scale one using the same scenery and a similar track plan. Photo by Bob Whetham.

I’m not sure if it was my thrifty streak or a reluctance to start over that led me to recycle my tinplate 027 scale layout and convert it to HO. The tinplate layout was built years ago to share with my daughter. Among its features was a hand-painted backdrop with scenes of the mountains near our home in southeast British Columbia, a few scratch-built structures, and a repainted Lionel FA that provided a 1950s Canadian Pacific flavor. As it turned out, my daughter’s passion for trains was fleeting and she soon moved on to other interests. Eventually, the layout languished, taking up valuable space in my train room.

I could have raised the level of the benchwork to match my adjacent layout set in Peru, but that would have blocked an interior window – something I did not want to do. Also, my Pacasmayo Railway was built as a steeply graded point-to-point line with a single switchback. What was lacking was an opportunity for continuous running.

Armed with a pencil, a notepad, and some measurements, I set out to see what could be done.  In the end, I opted for a figure eight plan with minimum 22” radius curves, a small yard, and an industrial spur. Only minor additions to the benchwork would be required and I could incorporate almost all of my existing scenery and backdrop if I kept the same local theme. It would also avoid the prospect of looking at bare woodwork while trying to conjure up sufficient inspiration to get something started. 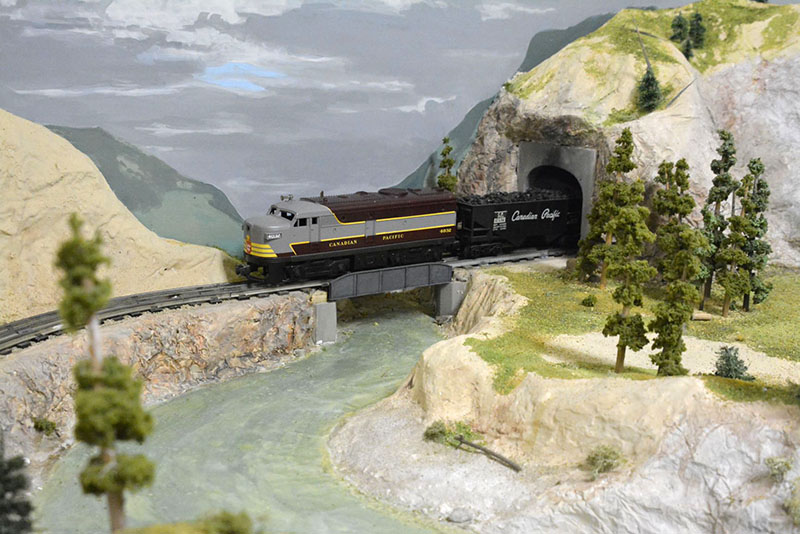 A Canadian Pacific FA crosses a bridge on the three-rail version of the layout. Photo by Bob Whetham.

Apart from removing the old tinplate track and a mountain in one corner, all that was needed before proceeding with the new plan was to paint a previously hidden section of backdrop. Two small curved sections of benchwork were then added to accommodate the wider radius HO curves.  Some leftover plaster and acrylic paints were sufficient to extend the scenery over the new areas.

Even a small layout set in the Rockies needs trees – lots of them. Fortunately, the undersized conifers made for my 027 scale layout worked perfectly for HO, their numbers augmented by smaller “bottle brush” versions made using a jig. Deciduous trees for an area near the river were crafted from woody shrubs, wire, and synthetic pillow stuffing material. Still more are needed, of course.

One of the most effective upgrades involved the use of a two-part resin to give a glossy finish to the river and slough. It was a fussy and expensive job but well worth the effort.

Needless to say, not all of my HO track follows the same alignment as its 027 predecessor. Most of the previous route had been covered over but a couple of sections could not easily be hidden and have been adapted to hint at the layout’s previous history. One is the small slough and culvert. There, a hand-laid section of track had been built on the original grade to represent an abandoned spur. Another is the main river crossing where the original bridge abutments have been left in place and the adjacent scenery modeled to give the impression of a former roadbed.

What has emerged is an upgraded, smaller-scale version of the original toy layout. To make operations more interesting and provide an excuse for running a re-lettered ex-Union Pacific switcher (I happen to like the color), there is also an independently operated industrial spur serving a local sawmill. Not entirely fictitious, as it was inspired by a recently abandoned line near my home. 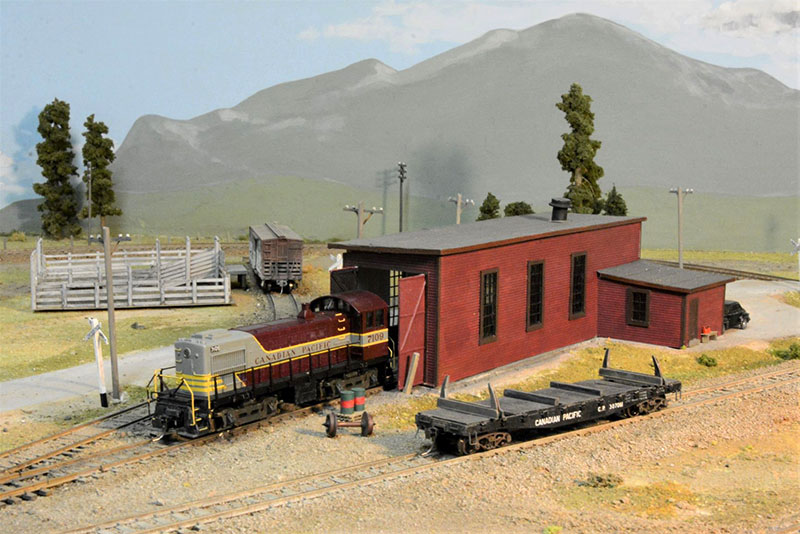 After the author updated the layout he added this single-stall engine house based on a prototype in Ontario. Photo by Bob Whetham.

In addition to its local orientation, one of the benefits of staying with the Canadian theme is the availability of ready-to-run locomotives and rolling stock. A few items including a drop-bottom gondola and re-purposed logging flatcar are not available commercially and these were kitbashed from secondhand equipment. The buildings have been more of a challenge. Using old photographs as a guide, most are scratchbuilt to represent local structures. One exception is the enginehouse. I was unable to find suitable examples elsewhere in my area but after a bit of searching, I came across a photograph of a single-stall structure in Ontario that served the purpose.

The Bummers Flats station was modeled after a former CP station building at Rosebery, B.C. The station and small community are named after a real location with an unlikely connection to a camel. Bummer, as he was called, had reportedly been abandoned following the 1890s gold rush on nearby Wildhorse Creek. He lived out his final days in a meadow down by the river.

There is still lots of work to do but it’s the part of model railroading I enjoy most. Giving my old layout new life has saved hours of work on basic construction and allowed me to spend more time on modeling, and that’s exactly what attracted me to the hobby to begin with. —Bob Whetham

This article appeared in the September 2020 issue of Railroad Model Craftsman! Subscribe today!