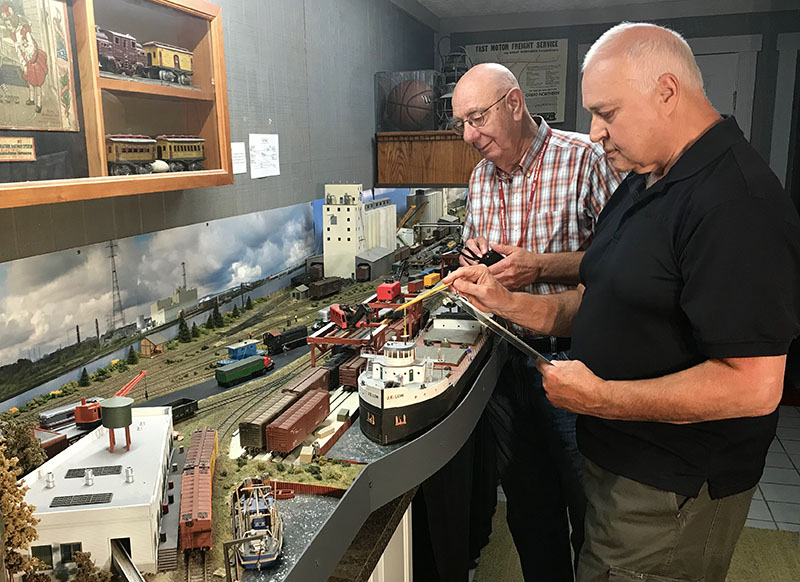 “Okay, Bill and Steve. You’re called for the 8:00 a.m. Port of Tacoma Job. Report to the harbormaster who has your switch list for Wharf 7. The J.E. Low is due to make port by 11, so the brass would like to have all the pulls done and the inbound cars spotted to keep her on schedule. Work safely, men.”

Working safely – in the real world or model realm – requires some thoughtfulness and sharpness. Most of us have seen newscasts, ads or articles in which noted authorities say stimulating the mind has a positive effect on cognitive skills, memory and ability to focus. Or, put another way, keeping old minds young. Many of those people advocate doing puzzles of all kinds — crossword, jigsaw, sudoku, and so forth. Maybe we should add a “switch list” to that group.

Perhaps one of the secrets to keeping our minds young involves operating sessions where we perform railroad jobs on our model empires.

Our round-robin operating group regularly operates on seven different layouts in central Ohio. Weekly sessions range from seven to 12 operators. The average age of our group is about 68. Two members are above age 80, and 11 more are above age 60. Yet the operating sessions show no sign of being encumbered by age. Plus, post-operating gab sessions remain as lively and varied as ever.

The opening of this Perspective is a typical instruction as an operating session begins on one of the layouts in the group — the HO scale Tacoma Belt Railroad. The port crew along with four Class I crews work in zones, having the Belt classify cars and run transfers. Just like on the real railroad, yard space comes at a premium, customers are depending on you, and there’s always a road freight waiting for you to get out of the way.

The operating scheme is different but just as challenging on another layout in the rotation — the O scale Ponaganset Northern, set in New England. Not as many trains run during a session, but the switching is just as challenging. It takes a two-man crew a couple of hours to switch the Mystic River Industrial District. Getting a train over the line requires interaction with other crews, the dispatcher and tower operators. Like any puzzle, the solution requires thinking and attention to detail.

Various organizations promoting health for senior citizens often list things that can keep the aging mind healthy and sharp. In addition to solving puzzles, which is on most such lists, many also include things like “feeling a sense of accomplishment,” “socializing with friends,” and “trying new things.”

A two- or three-hour operating session provides all of these and more. Is there any model railroader who, at the end of a successful session, doesn’t feel good about what he or she has accomplished?

Then there’s the wonderful socializing that occurs as one works with others to get that industry switched or that train made up before the clock signals that time is up.  Or perhaps it’s the dispatcher, forced to try a new route or a new way to handle train QMST62 when a derailment occurs on the main line.

The process — as in real life — can go on for as many hours as needed to get the work done. But in the P.N. or Belt’s basement homes, the sessions only go as long as the crews want to work or their legs hold up.

We can’t say with certainty model railroad op sessions will keep you young or prevent dementia. But Harvard Men’s Health Watch noted: “Your brain has the ability to learn and grow as you age — a process called brain plasticity — but for it to do so, you have to train it on a regular basis.”

Training your brain with model trains certainly is an appealing idea. That sounds perfect for most of us, and now we kind of have doctor’s orders to head to the layout and switch the paper mill. And while many people dread yard work, there are those among us who always seek to do rail yard work!

While we lack the scientific proof to support our theory, we can see evidence that it seems to work at our operating sessions and at events such as those sponsored by OPSIG (Operations Special Interest Group). Maybe a good grant writer could draw up a proposal to get federal funding to study this.

But while we wait for such a study, we can go to our operating sessions, run lots of trains and feel that maybe, just maybe, we’re improving our mental health and keeping ourselves young while having fun.

This article appeared in the November 2020 issue of Railroad Model Craftsman! Subscribe today!