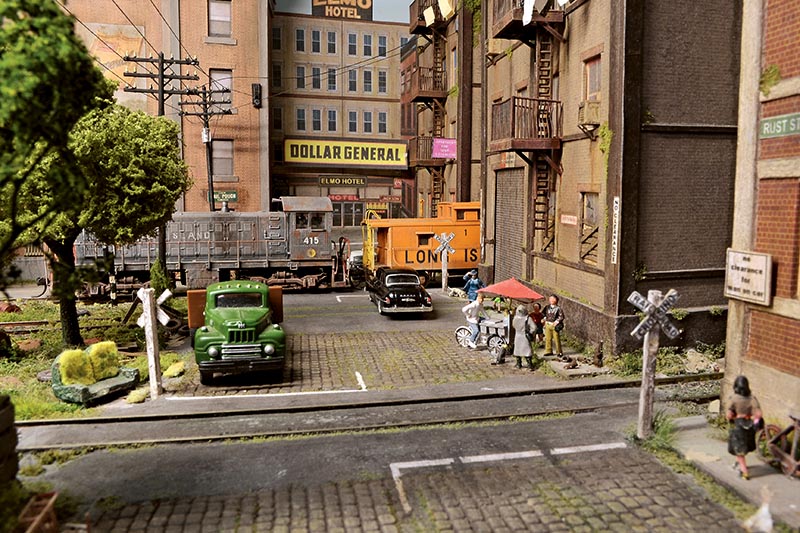 By Raymond O’Neill/photos by the author

My HO scale New York City-themed switching layout was born in a pub in England. I have long been interested in American railroading and have wanted to build an American-inspired switching layout since the 1980s. My interest stemmed from an Athearn “blue box” diesel a friend had given me. I was blown away at how well it ran — much better than any British models at the time — and it convinced me to focus my modeling on the railroads of North America.

Like many other modelers in the United Kingdom, I don’t have a basement to build a model railroad empire in. Instead, I had a 13×3’ corner to fill, just enough for a reasonably sized switching layout. I also wanted something that was movable so I could take the layout on the road and exhibit it, which is a common practice over here. After many nights sitting in my local pub scratching out a track plan on napkins, the New York-inspired switching layout “59th and Rust” was born. 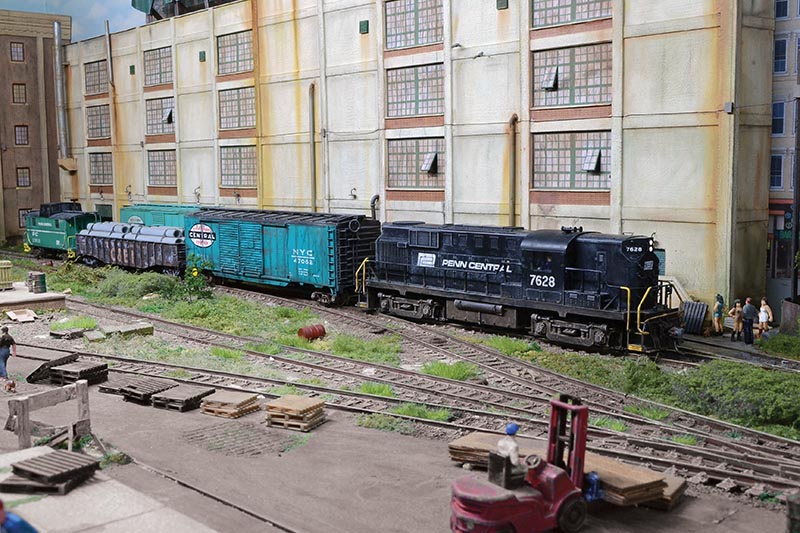 Track Plan and Setting
The track plan is loosely based on Long Island Rail Road’s long-abandoned Evergreen Branch, which originated at a waterfront terminal in the Greenpoint neighborhood of Queens south toward Brooklyn. In its later years the line began at the busy Bay Ridge Branch at Coopers Ave. Junction and ran northwesterly and connected to the Bushwick Branch at Varick Avenue. While the line was largely abandoned in the 1930s, a small portion remained active into the 1970s serving several industrial freight customers.

The area modeled is a small yard between Halsey Street and Decatur Street in Queens. The layout is set between 1965 and 1975, a broad period but one that allows me to represent a number of different railroads that served the region, including LIRR, New Haven, Pennsylvania, New York Central, and successor Penn Central.

The name “59th and Rust” came from an intersection near where the LIRR crossed. I thought the name was an interesting one for a layout and I even designed a sign board to look like a New York City street sign (in the 1970s, the borough of Queens used blue-and-white street signs). 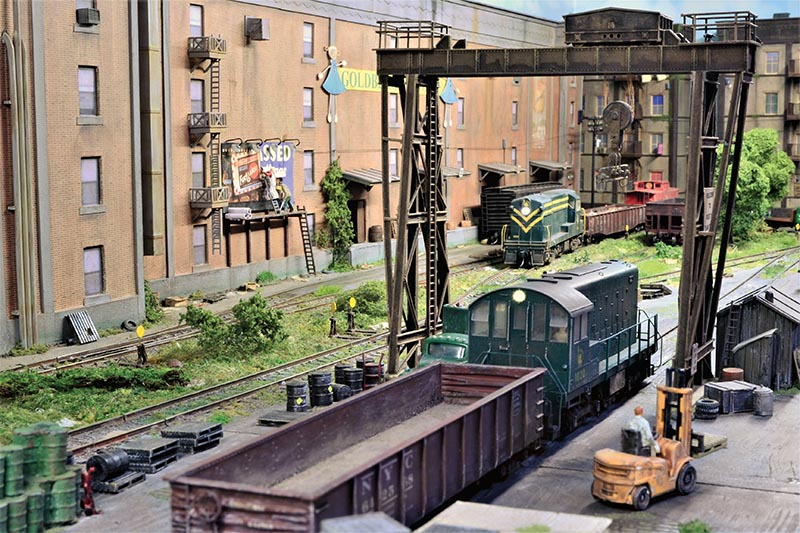 While the name sets the railroad in Queens, switching out the locomotives and rolling stock with that from roads like the Central New Jersey, Baltimore & Ohio, and Erie could easily place the scene across the Hudson River in New Jersey. The urban scenes on the layout are not meant to depict one specific place, but rather capture the feel of urban railroading in New York City in the 1960s and 1970s.

Baseboard and Track
The layout is made up of three 48×18” sections; two are scenicked and the other is a fiddle yard. On the opposite end of the fiddle yard, a single stretch of track is placed on a 24×4” board (the “fiddle stick”) to give me a little more room to switch cars at that end of the layout. All together, the layout is about 14’ long.

The track design was based on what I could find in a box of old PECO Code 100 track that was left over from a previous layout. If I had to do it all over, I would most likely use Code 70 or 75 rail; however, once the rails were painted they looked quite realistic. I run trains with a Lenz 100 Digital Command Control system…