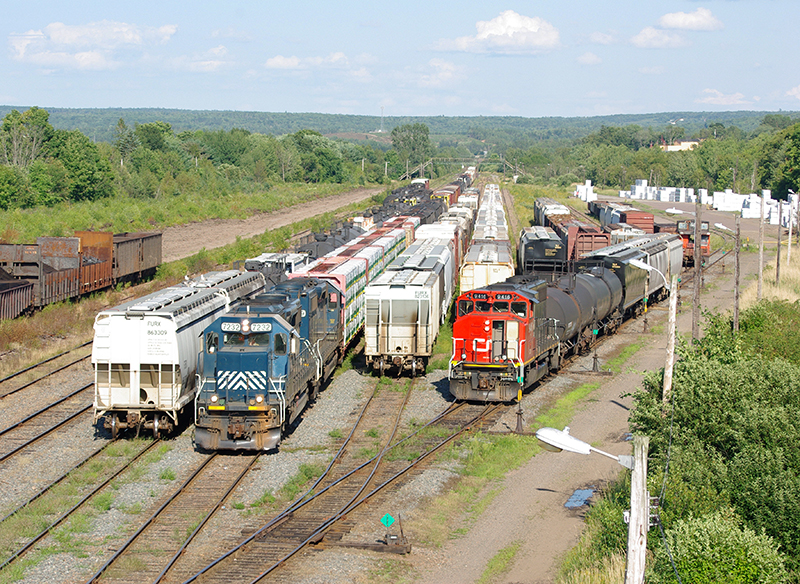 How about, instead of using interchange tracks to ship and receive random freight cars, we use them to tell a story? Photo by Andrew Castle.

Over the years much has been written about the interchange of freight cars from one railroad to another on both the prototype and our smaller model versions. An interchange provides connections to the rest of the continent’s rail network and allows freight loaded on one railroad to travel in the same car until it is offloaded at its destinations hundreds or even thousands of miles away. Nobody can argue that interchange adds variety to both operations and the road names seen in our miniature worlds. But what about that common statement that an interchange with another railroad can be seen as a “universal industry?” A track where you can see any type of freight car from any railroad? While this statement has made it into several magazines and books over the years I think it’s time to dig into that statement a bit.

If we roll the clock back to early in the diesel era, railroads were much smaller and interchange was required for cars moving any significant distance. The main purpose of some railroads was (and still is) to move cars from one interchange to another with very few online customers of their own. So if you are modeling one of those “bridge lines,” not only does interchange have benefits, it’s almost a necessity!

Throughout the Midwest, a person does not have to look far to find a place where railroads cross. Nowadays, they are sometimes two lines of the same railroad; but up until the 1970s many of these crossings were between different railroads. They also made convenient places to interchange freight cars. Interchange is also done in railroad yards with a train from one railroad running into a yard owned by another railroad to drop off and pick up cars.

But is there just a mad traffic jam of random freight cars moving in every direction? Can you really find any freight car on any interchange track? I am going to go out on a limb and say the answer to both of those questions is no. Instead, I am going to say interchange involves particular freight cars carrying specific goods in certain directions in patterns that repeat over and over. There is a steady parade of cars hauling raw materials to specific locations for processing and finished goods moving to markets that need them. So I am going to counter that statement that an interchange is a “universal industry” with a statement of my own. Railroad interchange follows a logical pattern dependent on era, region, industry, and market.

Following this logic, it would be quite plausible to see a Northern Pacific boxcar carrying lumber from the Pacific Northwest across the US Midwest to markets in the Northeast. But seeing a Baltimore & Ohio coal hopper rolling across southern California? Probably not.

Exploring the concept further, how does it affect our model railroads? First, we need to stop treating an interchange as a place to shove any car that does not fit the theme of our layout. That flashy boxcar that you couldn’t leave on the shelf at the hobby shop? The unique tank car that was such a good deal you couldn’t pass it up? Do they really have a purpose on your layout?

My layout features an interchange between Canadian National and the short line Cape Breton & Central Nova Scotia Railway in Truro, Nova Scotia. I will admit this interchange is a simple one to understand, but that is exactly the story I need to tell. The interchange is the only outlet for freight destined to and coming from the industries on the CBNS. So what are those industries? During the time I model there were two paper mills, a Michelin tire plant, a steel mill, a railcar manufacturing plant, a couple of coal mines, a lumber mill, and several smaller industries. So the freight cars interchanged in the Truro yard reflect those industries. Boxcars of paper, covered hoppers of carbon black, gondolas and flatcars of steel, and the occasional hopper of coal tell the story of the industries that lie beyond the backdrop and beyond the basement.

Does your model railroad have any interchange tracks? Does your interchange tell a story? More importantly, is it the story that you want to tell?  —Andrew Castle

This story appeared in the November 2021 issue of Railroad Model Craftsman. Subscribe Today!