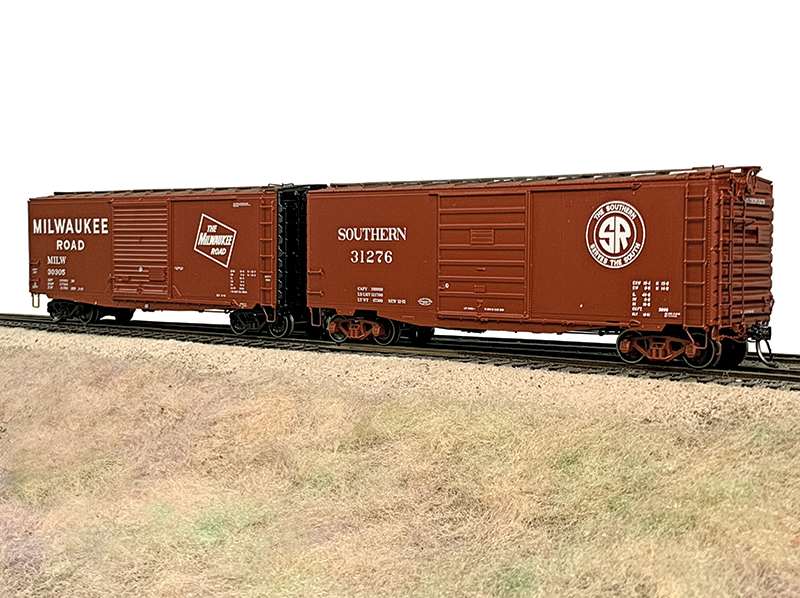 This 9-foot door version of the 40-foot PS-1 has never been produced before for HO scale in any form; never in brass, nor plastic, or even as a resin kit.

Before you think, “Oh, this is just another PS-1 boxcar,” please note that this 9-foot door version of the 40-foot PS-1 has never been produced before for HO scale in any form; never in brass, nor plastic, or even as a resin kit. Looking at the variety of body shells and options tooled up, the 9-foot door 40-foot PS-1 boxcars from Tangent practically constitute a new family of boxcars by themselves.

Like most carbuilders, Pullman-Standard would design and build bespoke versions of their freight cars based on their standard designs to meet specific customer requirements and specifications. One such specification was a 9-foot wide sliding door. Between 1951 and 1962, Pullman-Standard built 40-foot long PS-1s with 9-foot wide sliding doors for a number of different railroads including Southern, Louisville & Nashville, Milwaukee Road, Green Bay & Western, Chicago & North Western, and Katy. Designated by the AAR as class XM, these cars were typically assigned to general service to haul most any kind of freight. With doors an extra foot or two wider than other boxcars of the time, the 9-foot wide doors on these PS-1s made it easier for forklift operators to load and unload commodities. These cars were found in service hauling lumber products, machinery, appliances, paper and general merchandise and were a common sight throughout North America with a few hardy survivors persisting into the late 1980s. 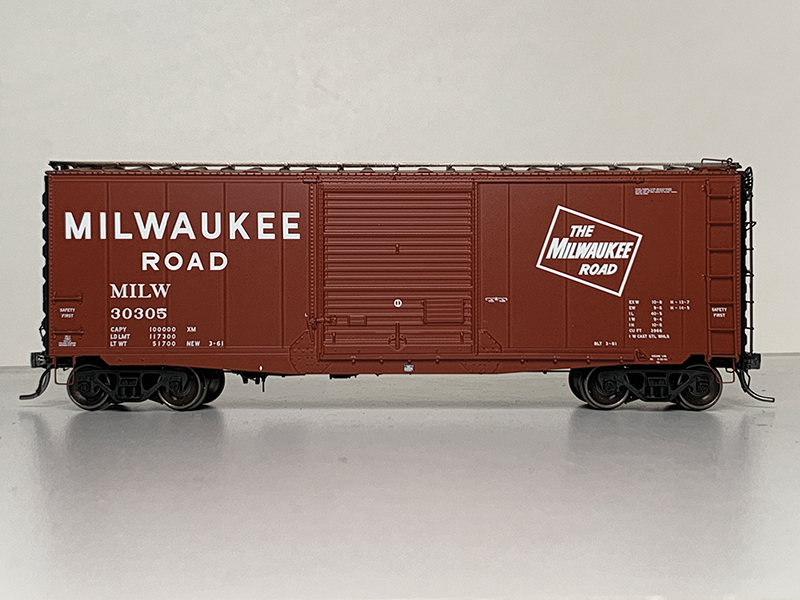 A side view of Tangent’s 40-foot boxcar painted for the Milwaukee Road.

We received two 40-foot PS-1 boxcars with 9-foot doors for this product review: one sample finished for Milwaukee Road and the other for the Southern Railway. Side-by-side, the cars are outwardly quite similar at first glance, but are noticeably different due to the different door designs at the center of the car. However, different door types is only where the differences begin for this family of cars with 9-foot wide doors. As mentioned above, Tangent has tooled up a plethora of different details for this release. There are three different styles of car ends (early riveted, early welded, and a later welded style), two different lower side sills, four different 9-foot doors, five different handbrake housings, two different running boards, two different brake platforms and four styles of 50-ton trucks. Tangent has taken great lengths for accuracy in this release.

Our first sample is a replica of SOU 31276, which is a representative of the first PS-1s built with a 9-foot door back in 1951 by Pullman-Standard’s car plant in Bessemer, Alabama. Part of a massive order of 2,019 cars (SOU 30000-32018), each of these cars for the Southern Railway featured an “early” side sill configuration with deep side sills only under the door area, and an open gap before the trucks. Like the prototype, SOU 31276 is equipped with a Miner handbrake housing and an early version of the 9-foot door supplied by Superior. Notable details on this car include a football-shaped logo for the Pullman Bessemer plant adjacent to the door opening, and different build dates of either November or December 1951 depending upon road number.

Our Milwaukee Road car is MILW 30305, delivered in March 1961. MILW 30305 was one of 650 ordered by Milwaukee Road. For this initial release, Tangent is producing replicas of the Milwaukee 40’ PS-1 cars that were built with Camel/Youngstown 9-foot sliding doors. This Milwaukee body features the later welded-style Pullman-Standard car ends and the “larger-style” lower side sill that extends beneath the car in a single continuous span from bolster to bolster. Ajax handbrake equipment and 50-ton Barber S-2 roller bearing trucks also serve to distinguish this car from siblings delivered for other roads.

As with the Southern car, the roof of the Milwaukee cars is finished to represent an unpainted galvanized steel roof with red paint overspray per prototype.

Pad printing on both of our samples was found to be extremely sharp and opaque without any visible flaws.

Standard features on all cars include fine wire-form grab irons and coupler cut levers, separately applied door tracks with 9-foot doors fixed in place, thin plastic see-through brake wheel platforms on the B-end underneath the brake wheel housings, and running boards up top. Depending upon the prototype, any of five different brake wheel housings can be found on these cars; either Miner, Universal, Ajax, Klasing or Equipco where appropriate. At the corners are full-height seven-rung Pullman-style vertical ladders made of folded etched metal on the right side corner and bracket grabs cast from thin engineering plastic on the left side of each car. Either of two styles of running boards and two styles of brake platforms are also provided. While we have become accustomed to etched metal renditions of the running boards and brake platforms, the plastic renditions of these parts also provide a see-through appearance with a cross section that still delivers a fine-scale appearance. Also, these running boards are unlikely to warp at all, unlike the way etched metal ones sometimes do.

Beneath the sills, the stirrup steps are formed from flat wire and are of fine-scale proportions. The AB brake system under the car is fully plumbed with .015 diameter (including paint) wire for brake rods and piping between the AB valve, main reservoir, brake cylinder, brake clevises and other components.

As mentioned above, Tangent has tooled up a family of four different road-specific versions of 50-ton trucks. These trucks are offered in either plain-bearing or roller-bearing versions to go with these PS-1 boxcars. Two of these designs have never been offered before in HO scale, including the roller bearing version of the 50-ton ASF A-3 and the roller bearing version of the 50-ton Barber S-2 truck. Of our samples, the Milwaukee Road car sports the Barber S-2 50-ton roller bearing trucks housing 33-inch CNC-machined metal wheels with rotating Timken bearing caps. A sprue containing four extra Timken bearing caps is provided, in the event that any of the original ones decide to wander off. The tiniest bit of PVA-based canopy glue at the end of the exposed axle will help secure any replacements firmly onto the axle without affecting performance. In contrast, the Southern Railway PS-1 employs the plain-bearing version of the Barber S-2 with its truck side frames, bolster and separate brake beams molded in boxcar red to match the body color per prototype. Both varieties rolled freely on our test bench and layout. 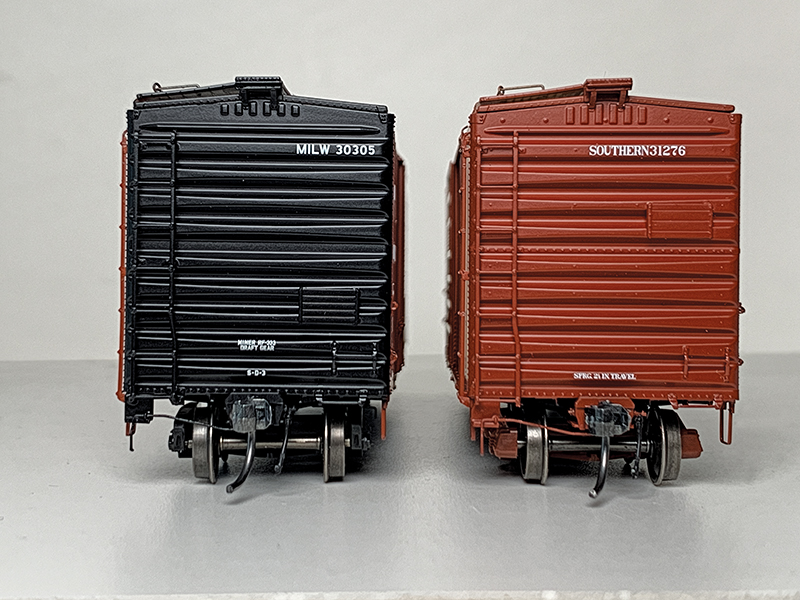 The balance of the running gear consists of “near-scale-width” draft gear boxes with finely rendered draft key detail, and Kadee #158 scale-head whisker-shank metal couplers. Of special note are the train line air hoses now cast in rubber instead of POM (Delrin) plastic. The rubber air hoses are soft and pliable and look to withstand most anything a layout or inattentive operator can dish out.

As stated earlier, the stirrup steps are formed from flat wire to deliver a superior level of durability while also conforming to a scale width cross-section. Unlike some prior examples of high-detail rolling stock, all details are sturdily attached to each car, and look to withstand all but the most heavy-handed handling. The finely rendered yet sturdy stirrup steps are one of the highlights of this model.

On the scales, each boxcar weighs in at a substantial 4.7 ounces. Compared against NMRA Recommended Practices, the car is a notch heavier than the recommended 3.9 ounces for rolling stock of this length. However the car does not at all feel “overweight” but instead promises greater tracking ability.

Unlike releases of even a few years ago, the CNC-machined metal wheels look even better now with realistic contours on both the inside and outside faces of each wheel instead of flat wheel faces. By default, all cars have 33-inch diameter metal wheelsets with a .110-inch wide wheel tread. For those who desire, .088-inch tread 33-inch metal wheelsets are available separately from Tangent. All wheelsets measured were in conformance to our NMRA Standards Gauge.

As previously mentioned, each car comes equipped with genuine Kadee “scale-head” whisker-shank metal couplers fitted inside near-scale-width narrow draft gear boxes. After minor adjustment of the magnetic trip pin, the coupler height measured perfectly against our Kadee 206 coupler height gauge. On our test layout, the cars performed flawlessly in all circumstances, whether rolling in a consist or set out during switching operations.

For modelers of the 1950s through the 1980s who seek the highest degree of accuracy in detail combined with flawless operation, this latest release from Tangent will serve as the vanguard of a new family of Pullman-Standard 40-foot PS-1 boxcars.

This review appeared in the July 2021 issue of Railroad Model Craftsman! Subscribe today!