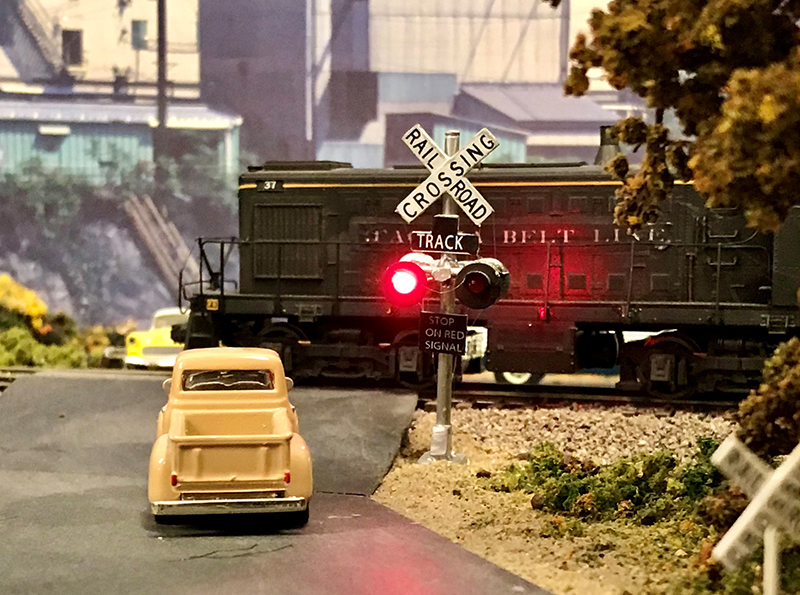 Scott Williamson says even just adding the sound of a crossing gate to your layout can bring a whole new level of realism to your modeling. Photo by Michael Wolfe. 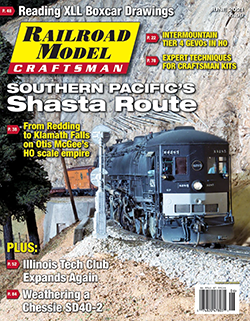 A lonesome steam whistle echoing off buildings or valley walls; a melodious five-chime Nathan air horn or the single toot of a New Haven Hancock air whistle; the bam-bam bam-bam as wheels slam across a diamond; or a crossing gate bell warning motorists of an approaching train — all leave marks on our senses. The sounds of railroading helped draw many of us trackside, and many of us seek better ways to add that aural appreciation to our model railroads.

The most common way to add sound is with a locomotive. Lionel and other toy train makers had various sounds for locomotives dating back to the 1930s, but scale locomotives produced nothing but gear noise. Most of us ran without sound for years and were happy to do so.

Back in the 1970s, Pacific Fast Mail introduced a unit that offered locomotive sounds. It was large by almost any standard, but it was groundbreaking and opened a new vista to modelers. The sound was generated in the unit and then broadcast from a speaker in the locomotive. The system was only for steam locomotives, and the PFM Sound System II originally sold for around $1,500 (equal to $7,400 today).

The floodgates for sound really opened after Digital Command Control took hold. Not only were we freed from tethered throttles and block control, but we could follow our trains as they traversed our miniature empires. Wireless DCC followed, along with decoders that controlled speed, functions, and sound. Compared to the old PFM sound unit, DCC decoders offer a much cheaper way of introducing sound to modeling.

These miniature decoders not only produce sound for steam and diesels, but for countless varieties within each type, from small switchers to large main line locomotives. The types of diesel sounds are even more varied, and include all the major builders, such as EMD, General Electric, Baldwin, Alco, and Fairbanks-Morse (Photo 1). Within each of these are a choice of horns and whistles, types of bells with varying ring rates, plus sounds of coupling, air pumps, steam blow-off, and a host of others, down to the fireman scooping and shoveling coal into a firebox.

Observation has revealed that appropriate locomotive sound results in more realistic speeds by the “engineer.” Even folks new to model railroading can tell by the sound that something just isn’t right when a steam switcher in the yard sounds like the rods are ready to fly off! Or when an Alco S2 is switching the paper mill but it sounds like a jet ready for takeoff.

Not only do locomotive sounds equal slower or more-to-scale speeds, but the volume also needs to complement, rather than detract, from the experience. Many locomotives from the factory seem to have the volume set to “stun”! As we become more experienced with sound, more theories are being published on what an “ideal” setting seems to be. Beauty may be in the ear of the beholder, but the seasoned operator will take the hint when nearby operators are covering their ears, running for cover, or not-so-quietly suggesting that the bell be turned off.

But it’s not just locomotives that can add to our appreciation of sound. Flashing lights accompanied by bells at a grade crossing (Photo 2) add to the experience, and it’s even better when the engineer sounds the long-long-short-long whistle or horn warning.

Speaking of warnings, sound can also play an important role for keeping things safe on our model empires. On my Tacoma Belt Railroad, there’s a lift gate to enter the main operating area (Photo 3). Three tracks cross it. Fred Rea, one of the electronic gurus from our crew, installed a sound unit of an actual lift bridge gong with a switch on the bridge. Operators know to activate the gong before opening the bridge so railroad equipment doesn’t take the plunge into the concrete bottom of the Puyallup River. To date, it’s worked like a charm.

Environmental sounds can also add a lot to the ambience of our model railroads. Under the Port of Tacoma on my layout is a CD of sounds playing on a loop from a boom box. There are ship whistles ranging from low moans to high-pitched squeaks; seagulls; and harbor buoys clanging their warnings (Photo 4).

Background sound recordings are available from a variety of sources. A number of modelers have installed them to great advantage, such as saws buzzing in a lumber mill (Photo 5); a burbling brook in a quiet meadow setting (Photo 6); or birds chirping as a train passes through a forest. There are industrial sounds galore. Imagine the cacophony of sounds as you work a steel mill complex!

Sound is likely to play an even bigger role as technology makes it easier and more affordable to add it to our model railroad experience. Sounds good!  —Scott Williamson

This article appeared in the June 2021 issue of Railroad Model Craftsman. Subscribe today!