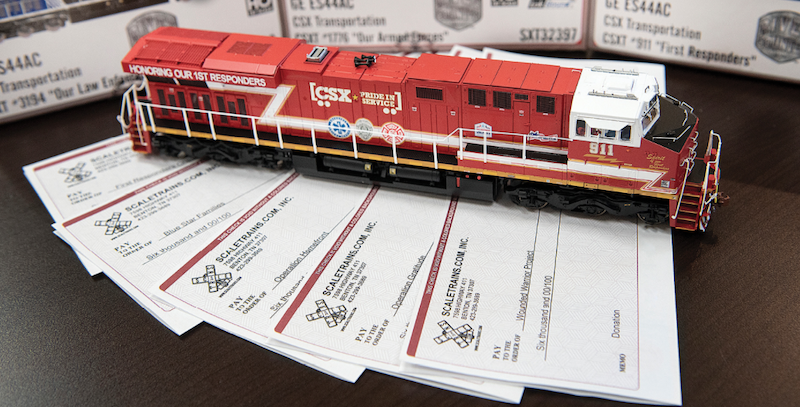 The donations helped the same organizations that CSX partnered with its “Pride in Service” program. Photo Courtesy of ScaleTrains.

ScaleTrains.com is partnering with CSX Transportation in supporting its Pride in Service program and recently donated $30,000 to five different charities.

The Pride in Service program was established in 2019 so CSX could recognize the contributions of its employees who served in the military and active-duty first responders in their community. As part of the program, CSX painted three ES44 locomotives to honor veterans, fire firefighters and police officers. ScaleTrains has released all three locomotives in HO scale. To ensure that their officially licensed models were true to the real-world prototypes, CSX graphic designer Tyler Hardin and the CSX Huntington Locomotive Shop provided ScaleTrains.com with the original paint and lettering diagrams for all three locomotives.

“We’re thankful to everyone who purchased a Pride in Service model and their commitment to helping us give back to these wonderful organizations who work hard to take care of our veterans, first responders, police officers, and their families,” said Shane Wilson, President of ScaleTrains.com. “Working together with CSX to offer highly detailed, accurate models of these special ES44 GEVOs has been truly rewarding. We’re grateful for the opportunity to support the Pride in Service program.”