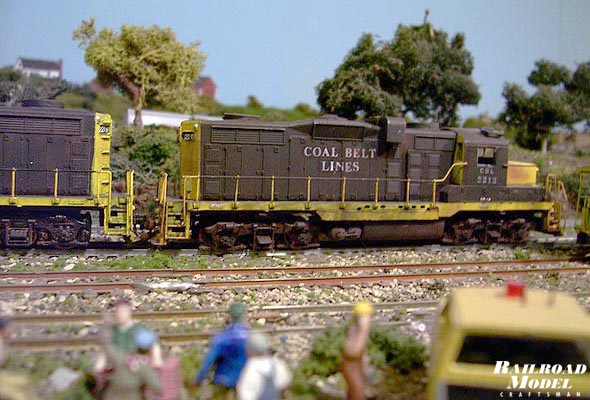 A Coal Belt Lines GP18 is part of a lash-up handling local freight duties on the author’s Northeastern-themed HO scale model railroad. Read how an inexpensive Tyco unit was kitbashed into a unique model.

by H.E. Dinsen /photos as noted

The Coal Belt Lines (CBL) is my freelanced HO scale model railroad, based in part on the Reading & Northern shortline of Pennsylvania. My railroad, much like the railroad it emulates, has acquired much of its motive power as third-hand, hand-me-downs for a cheap price. Often an older, less expensive model can be used as the basis for a kitbash. A very good and inexpensive kit bashing project for beginners, or a reasonable answer to a GP18 for your pike.

About a year ago I was at a local train show with my son who models the Rio Grande and other major western lines when we were looking over several engines on table. I kept looking at a couple of old Tyco GP20’s, all in the wrong paint schemes. In fact, it seemed like everything was wrong with them. I said to my son, “If nothing else they’ll be a good starting point for a couple of EMD GP18’s…” The guy running the table heard me say that and he was just about begging me to take the engines off his hands. Some model railroaders who have been around the block don’t want anything to do with the older Tyco stuff unless it’s used for kit bashing purposes… Long story short: I took them off the guy’s hands for a song (and I can’t sing worth a darn either). 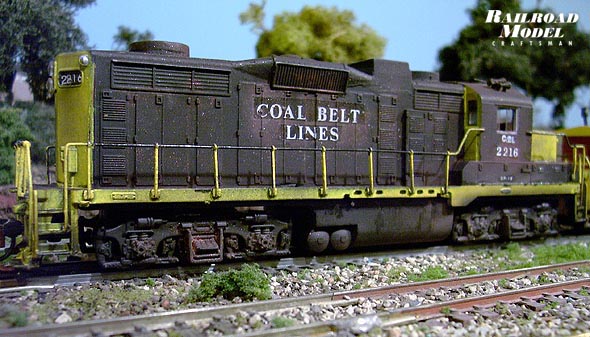 When I got home, the motors, trucks and drive mechanisms hit the garbage can. Next, I soaked the shells in brake fluid to remove the factory paint while I was searching for the parts I’d need for the project. Once they had soaked for an hour or two, I was able to scrub away the paint and reveal bare plastic. Once this process was complete, the shells were washed with soap and water and allowed to air dry.

Using photos I found around the Internet of Lehigh Valley GP18’s, I made up a short list of items I would need to complete the project. Some items I had kicking around my parts box, other detail parts I had to order.

The first order of business when the shells were dry was to cut off the turbocharger from the shell. I sanded the spot to make a smooth surface for the “aftermarket” air cleaner to be attached. Once that is done I had the job of carefully — very carefully — cutting the rear molded on fan towers off to relocate to the new position. The small 36-inch fan tower is the next item to be taken off. You might consider sanding the 36-inch fan housing off rather than cut it off.

Next, I cut a piece of .00020-inch plastic to shape to cover the area of the two fan towers and glued it in place. Then I glued the 48-inch fan tower into place, five scale feet from the end of the hood. As an alternative you may want to use a winterization hatch in lieu of the fan tower such as Lehigh Valley used on their GP18’s (Details West 235-212). 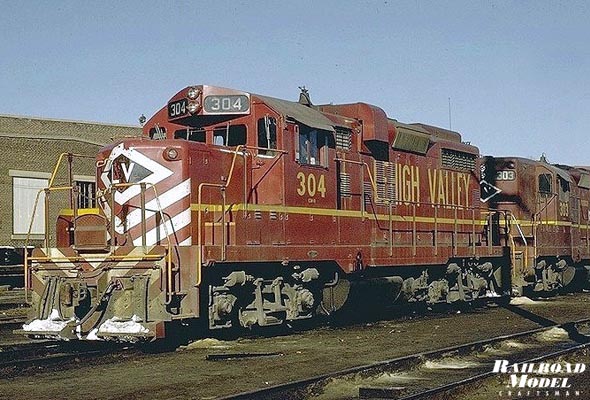 Lehigh Valley Railroad EMD GP18s were the author’s inspiration for his model.

Once this process is done and everything on the long hood is in place, the air horn is placed on the right side (engineer’s side) of the cab. I equipped my locomotive with radio equipment in the form of a staple cut in half, bent to shape and glued in the center of the roof (or use the Details West Sinclair antenna 235-274). Next, the hood mounted electric bell is attached on the left side of the hood between the cab and fan tower. A couple things I’ve procrastinated on include the MU hoses and sun shades on the side windows, but they will be installed eventually.

I set everything aside for a day and then came back to carefully wash the shell for finger prints and any dirt picked up during the work. I allowed the shell to air dry before starting the painting process. The Coal Belt Lines uses a simple black and yellow paint scheme which looks appropriate for a Northeastern regional short line. 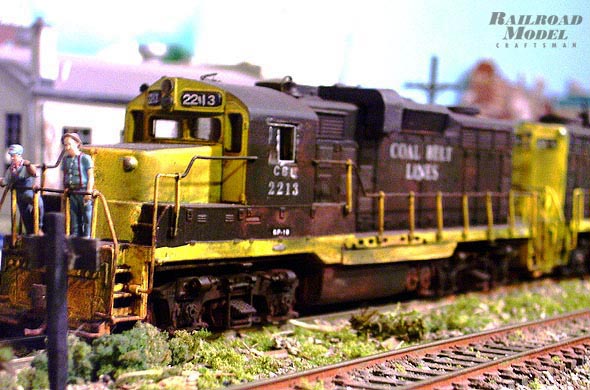 Last but not least are the GP9 frame, motor, and EMD power trucks. Remember we tossed the old Tyco motor, trucks, and drive mechanism when we started this project? I was lucky to have two powered Athearn GP9 units on hand when I did this project. A final touch for these former Athearn “blue box” units, I drilled .00020-inch holes in the air tanks for wire to represent brake lines.

After decals were applied and allowed to dry overnight, the last item on my list was a light weathering effect of road weary engines. Almost all my equipment gets the weathering treatment. After a brief test run, my GP18 was assigned to a local freight service on the Coal Belt Lines.

The other air cleaner boxes which I used I had on hand when I started this project were from Details West, which to my understanding they do not make any more.