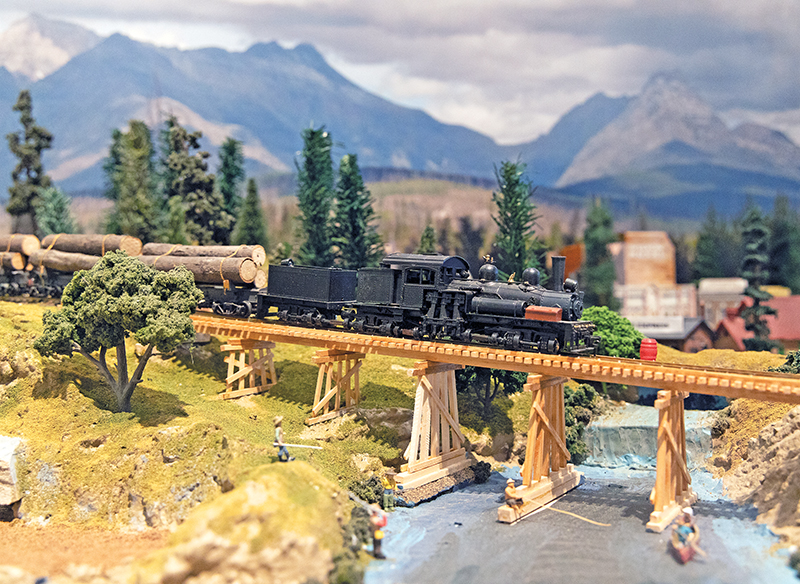 A group of modelers in Montana’s Flathead Valley donated their time to build a model railroad for a newly-built children’s hospital. Photo by Justin Franz.

I live in Northwest Montana, a place with rich railroad history dating back to 1892, when the Great Northern Railway arrived in Kalispell. Montana’s Flathead Valley is also home to a newly-built children’s hospital, a 190,000 square-foot facility operated by Kalispell Regional Healthcare. Somewhere along the way, KRH set aside some donated money for a model railroad in the lobby to brighten the day of some of Montana Children’s young patients. During construction, the project’s architect asked if I was interested in constructing the model railroad. My answer was an enthusiastic Yes! I turned to the members of a small local modular group. Grant Mounteer and John Bordner agreed to help me organize the effort with the help of many others.

The hospital wanted the layout in the lobby in what had previously been used as a floral display. The area was about 13 square feet, underneath a staircase. That proved to be challenging as we built the layout, but we didn’t let it deter us. The surface where the layout was going also had a molded rock formation that the hospital did not want us to remove, so instead we covered it with one-inch blue foam overlaying a plywood base.

At a meeting with the hospital personnel, we decided to present the display as several connected scenes that represented the local area. There would be a logging camp, a city, a farming scene, and of course a route to nearby Glacier National Park. Grant did the logging scene and route to the Park; John did the farm scene, and another modeler, Rob Schrock, handled the city scene. It was decided to construct each of these scenes as modules that could be created at home and installed on the hospital layout when they were completed. The decision was also made to have two independent tracks, so that two trains could be run at the same time. The basic electrical design and construction was my responsibility.

We designed the layout with a U-shaped backdrop that provided us with a crawl space to hide wiring and other things. Graphic artist Monte Sanford created a landscape image of the area near Glacier Park that I had used on my own layout, so we printed that and attached it to some sheet metal for the backdrop. 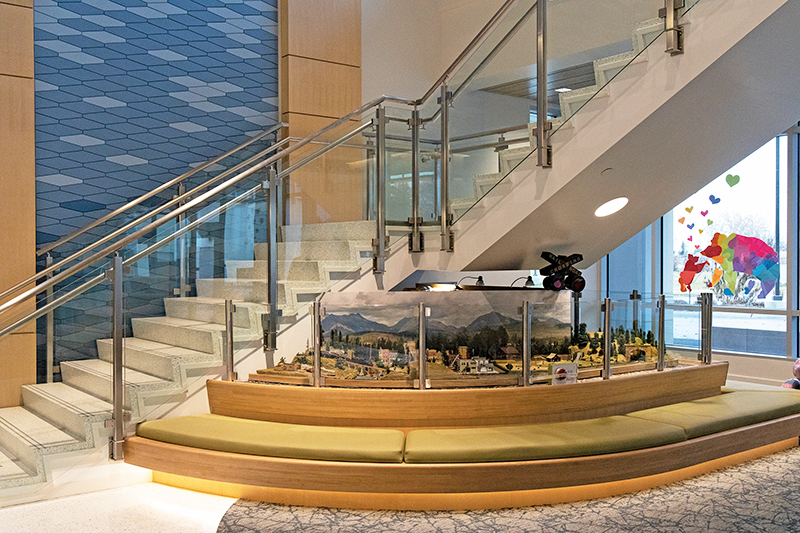 An overview of the model railroad at the Montana Children’s Hospital in Kalispell. Photo by Justin Franz.

We constructed two independent loops of track without switchers to make maintenance easier. We also installed a timed circuit, designed by Steve Horvath, that would start the trains on the layout when activated by a visitor and then run for about two or three minutes. The trains always stop at the same spot when they’ve completed their run. Along with the trains, we also added working lights in the city, a hobo camp with a simulated fire, and operating crossings. We surrounded the entire layout with panels of glass so “little fingers” couldn’t disturb the trains.

Another decision was scale. We considered both G and N before settling on HO. We also considered whether we wanted steam or diesel locomotives. We ultimately settled on the latter because they had fewer moving parts and would require less maintenance. We made sure to purchase equipment with metal wheels and good couplers, and coupler heights and wheel gauges were checked by another member of our crew, Barry Boyce. Due to the tight 22- and 24-inch curves we limited cars to 40- and 50-foot lengths. We purchased equipment local to the area, including Great Northern and Montana Rail Link.

Dan Bangeman donated a large-scale crossbuck that was modified by Vance Caroline to work on 12 volts and would flash when the train was running. That was placed atop the backdrop, adding another visual element to the layout.

Building the layout took a collaborative effort and thanks goes to the people listed above, as well as Kathy Britton (who spent countless hours helping with wiring), Robert Wise (who donated a sawmill building), and Grant Mounteer (who donated some other models). Atlas Model Railroad Co. also graciously donated the track.

Our purpose in constructing this model railroad display was to provide a sense of comfort and a possible diversion for both the patients and the families of those who needed the services of the hospital. The many hours required for the planning and construction of the layout provided a major sense of pleasure to those of us on the “crew.” The thought of being able to give an interactive distraction to children, parents, and families gave us a great sense of satisfaction. The question we asked of ourselves when we finished was, “Was it worth it?”

This article appeared in the February 2021 issue of Railroad Model Craftsman! Subscribe today!