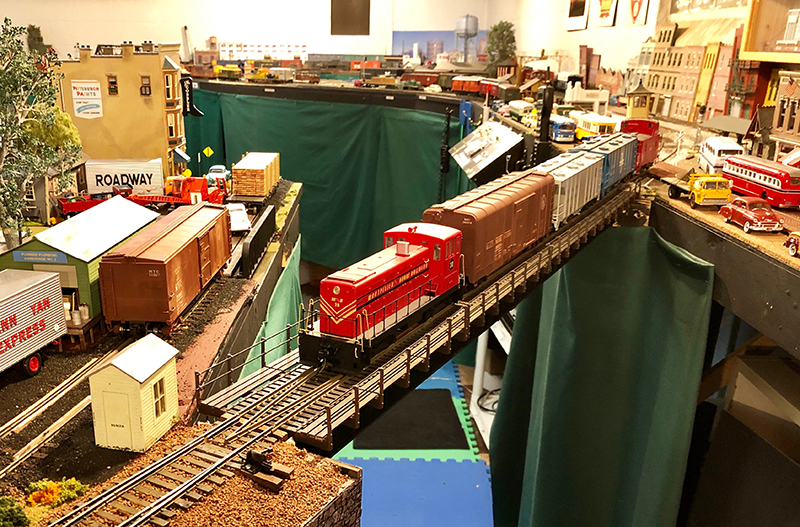 David Richter came up with a unique way to improve operations on his O scale layout: He built another one. Photo by David Richter.

Layouts change over time and that is certainly the case with the O scale Ponaganset Northern Railroad. When we held the first few operating sessions on the PN, it became obvious there were some problems and most of them could be traced back to the fact that the layout wasn’t really built for realistic operations.

The first issue was a lack of long passing sidings on the single track main line around the basement, which meant it was almost impossible to run two trains in opposing directions at the same time. This was solved by building the secondary main and Hanna Siding, both of which are about 25 feet long. The second problem was the lack of industries to switch to keep crews busy and make the layout more fun to operate, as well as a bit challenging.

While the first problem was solved with the addition of a secondary main line, the second issue took a little more effort. Enter the Mystic River Industrial District (MRID), set on an island that is physically separated from the rest of the layout. The island is between 24 and 27 inches wide by 11-1/2 feet long. It has a slight curve at one end and is connected to the mainland at Hanna Siding by a 40-inch long deck girder bridge. The bridge was constructed from two Atlas deck girder bridges that were melded together with details added, such as guard rails.

The MRID has five industries, plus a team track. All tracks on the branch are Code 125. The turnouts are hand-built and use ground throws. Because there are both facing and trailing switches, there is short run-around siding so the crews can access all customers. The tight curves and turnouts restrict car lengths. Most cars used on the layout are 36 to 40 feet long. The only 50-foot cars switched are an occasional boxcar for Plunger Plumbing or an express reefer for Rotini Produce.

The type of industries I chose for the MRID were selected because they use a variety of railroad cars. For example, Richter Vinegar, which was a real company in Manitowoc, Wis., ships out vinegar in its well-known red wooden tank cars with RVCX reporting marks. Rotini Produce receives strings of reefers while the grain elevator gets covered hoppers and an occasional boxcar. GATX takes a single tank car at a time, and Plunger Plumbing receives boxcars at both warehouses.  The team track can handle almost any type of car.

The curves and switches also restrict the kind of locomotives used. Usually, the district is switched by a GE 70-ton locomotive. If that’s not available, a GE 45-ton locomotive substitutes. Both are Yoder imports with DCC installed. Whenever the crew is required to leave the MRID to deliver or retrieve cars at a mainland yard, per union rules, a caboose is required. However, no caboose is needed when switching within the district, so the crew must find somewhere to store it while they work on the island layout.

Originally we tried operating the MRID with one person, but they often couldn’t get all the work done in a shift. Now both an engineer and a conductor are assigned. Because the MRID is accessible from four sides, the two operators can work from opposite sides of the island, which is quite efficient as well as more fun for the crew.

The crew receives their orders when they arrive for their shift. Westbound trains pick up and set out cars for the MRID at its connection with Hanna Siding. Almost immediately, the crew will have to spot a couple of cars to be picked up, and be ready to receive some set-outs. Then they must get to work pulling cars from industries for pickup by later trains, and spot any cars they receive. Sometimes cars stored last shift on the team track or bridge must be retrieved and switched to various industries.

During a typical operating session, there are three or four westbound trains. Any of these may have orders to set out cars for the MRID or to pick up cars from it. The crew must have those cars ready for that train. Incoming cars will have to be sorted and delivered. Crews working MRID usually take the full three-hour session to complete their work.

The MRID has been a great asset, providing two more operating slots and plenty of added operational interest. The concept of a switching district, manned by a separate crew, could be used on many layouts to add variety and work to operating sessions. It also proved that sometimes you have to get creative to solve a problem, even if that means putting a layout inside another layout.—David W. Richter

This article appeared in the March 2021 issue of Railroad Model Craftsman! Subscribe today!