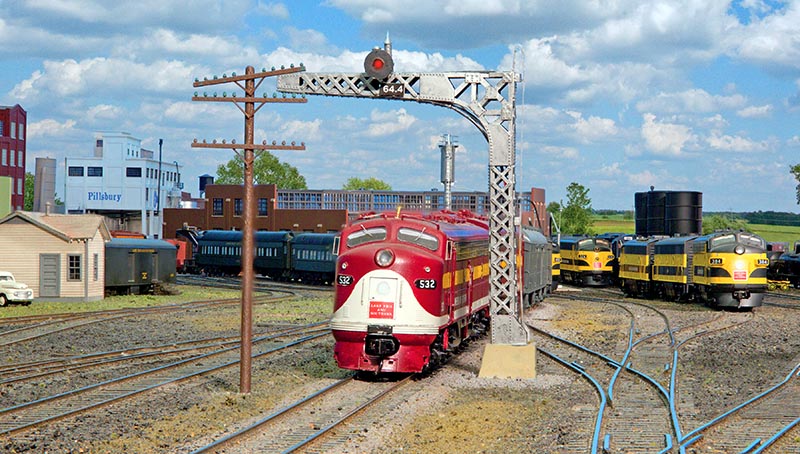 Lake Erie & Southern train No. 3/13 will pull up to the depot where the “depot job” switch crew will split the train into No. 3, which will run to St. Louis, and No. 13, which will run to Peoria. This marks the busiest time for the depot job as baggage and express cars get shift ed to the new trains, with some going to the post oﬃce and Railway Express Agency facilities at South Anderson 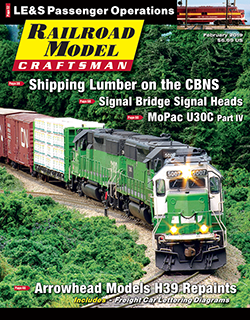 by Drake Hokanson/photos by Dan Munson

The availability of quality ready-to-run passenger cars in HO and N scales has generated increased interest in passenger train operations, and many layout owners are thinking about their neglected streamliners and locals and how to enhance op-erational enjoyment. With a bit of planning — and some realistic paperwork — most model railroads can amplify operational interest in passenger trains and create crew positions that draw even hardcore freight engineers onto sleek E-units and onto mail and express switch engines at the depot. And it works in any scale, for most any era from Civil War to Amtrak, and on railroads big and small, whether you run two passenger trains or twenty. 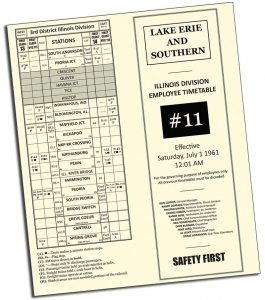 The Lake Erie & Southern
The Lake Erie & Southern is a basement-sized HO-scale railroad owned by Ron Copher in the La Crosse, Wis., area. He models a busy 1960s-era Midwestern granger line with considerable on-line freight switching and run-through traffic. Focused on operations, the CTC-controlled railroad absorbs 20-plus operators to run a full session. Freight has been the mainstay of the LE&S, but with falling passenger train revenues in the early 1960s, the continuing mail and express contracts are especially important.

While Ron had initially created a good passenger train operating scheme with enjoyable switching opportunities, I volunteered to organize it, improve it (if I could), and create paperwork such that staging and operations would flow smoothly for even inexperienced operators. What we figured out enhanced all aspects of operations on the LE&S, and we hope you can benefit from what we learned.

The entire proto-freelance LE&S system sprawls across Ohio, Indiana, Illinois, Kentucky, and Tennessee with lines running from Toledo, Cleveland, and Cincinnati to Memphis, St. Louis, and Peoria. The modeled portion of the railroad is the main line from the eastern cities listed above to St. Louis, and a secondary line from the northeast to Peoria. The modeled portion forms a reclining Y with Peoria to the north-west, St. Louis to the southwest, the main junction to the east at South Anderson, Illinois, with the line heading to the eastern destinations via Center Junction, Ind. South Anderson hosts a sizable classification yard and a busy mail and express facility served by several passenger and mail trains. The dining car commissary is also here, providing for car movements on those passenger trains still lucky enough to carry one.

Despite declining revenues, the LE&S still believes in passenger service. During a 24-hour fast clock session, the LE&S runs 16 passenger trains. Ron knows that one key to a lively passenger operation is to create and schedule a variety of trains, passenger trains that have not only different “personalities,” but also have different jobs. His timetable includes modern streamliners, heavyweight mail trains, and lowly locals.

LE&S train No. 8, the eastbound Twilight Limited, blasts through Carlin, Ill., en route to Detroit. It will soon make a station stop in South Anderson, where a diner will be added — just in time for dinner. This ﬂag-ship train often carries run-through sleepers from the Erie Railroad and Southern Paciﬁc.

An operating session begins with fast mail trains Nos. 12 and 11 between Cleveland and St. Louis, each hauling five to seven mail and express cars plus a single heavyweight coach. Mail business is good, so these trains usually run a second section. Rumor has it they still make money. Also early in the session is No. 2, the morning eastbound local, which is usually one or two baggage/mail cars and two heavyweight coaches. As a local, it stops at every one-horse town. No diner on this train, either.

Then, around sunup, No. 14, the eastbound Brave, runs from Peoria to South Anderson, where it is met by and combines with No. 4, the eastbound River King, out of St. Louis for Cincinnati.

The South Anderson depot complex is quiet until mid-afternoon when No. 3/13, the west-bound River King, arrives from Cincinnati and splits into No. 13 to Peoria and No. 3 to St. Louis.

Train Nos. 4/14 and 3/13 are mostly heavyweight equipment: mail and express, coaches, a diner, sleepers, and an observation car, complete with an open rear platform. On this cash-strapped railroad, it’s easy to imagine that some of the plush has worn off the cushions in these cars.

Not so the streamliners of the line, the Twilight Limited, Nos. 8 and 7, that stop in South Anderson later in the day on their runs between St. Louis and Detroit. Lightweight Budd and Pullman-Standard cars are the rule here, and there is always mail and express on the head end. Watch also for run-through sleepers from Southern Pacific and Erie Railroad…