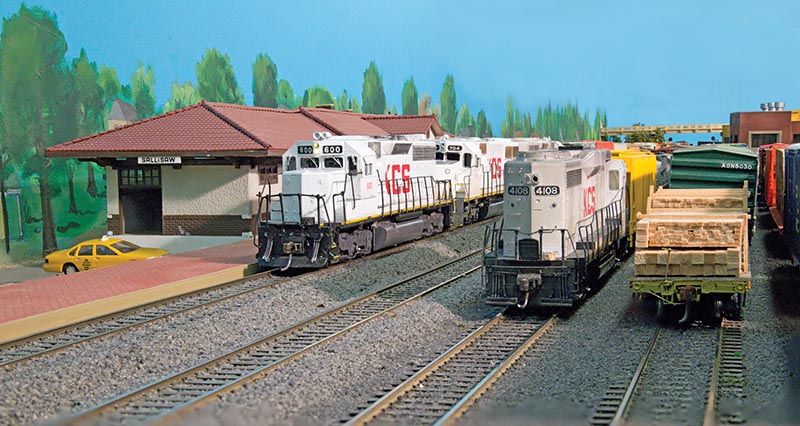 The northbound “Super Dog” pulls into Sallisaw Yard past the station as the Sallisaw Yard crew running GP30 4108 marshals the cars the Dog will pick up here. By Steve Davis/photos by Dan Munson

When our children left the nest for college, marriage, and careers, my wife and I decided to move out of the city to a more rural location where we’d have some room to breathe, and more importantly, space to build an operating model railroad. The result, with the help of many friends and family, is the Third Sub, representing Kansas City Southern operations between Heavener and Watts, Ok., in 1982.

Why the KCS?
Growing up in the San Francisco Bay Area, I was a huge Southern Pacific fan. When I moved to Amarillo, Texas, I came to love and admire the Santa Fe. My stepdad Tom Vanden Bosch has been a long-time prototype and fine scale modeler and my mentor in this hobby since we built a small layout together in our garage when I was young. “Model something you are familiar with, that you can frequently research and scout,” he advised me. Living in northeastern Ok., I had many attractive options including the Missouri Pacific, Missouri-Kansas-Texas, Santa Fe, Burlington Northern, Rock Island, and Frisco… Many of which are already widely modeled. Great KCS layouts do exist, but they seem to be a bit more rare, which led me to my decision.
Kansas City Southern runs through a scenic part of eastern Oklahoma, with grades requiring helpers and distributed power to conquer, as well as rivers and bridges, including a landmark crossing of the Arkansas River south of Sallisaw. 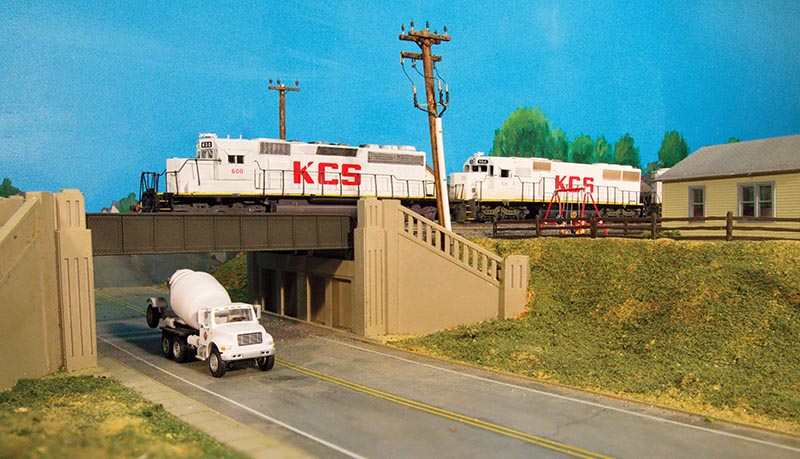 Kansas City Southern SD40-2 600 leading two gleaming new SD50s crosses Business Route 64 in Sallisaw. That extra horsepower will be put to work as the train pulls north up the ruling grade between Sallisaw and Stilwell.

The extent of Third Sub operations seemed like they could be reasonably modeled. Plus, there are interesting branch lines, interchanges and connections. My late friend Frank W. Bryan provided me with track plans, “SLIC” (Spot Location Inventory Chart) books, employee timetables, and daily dispatcher’s lineups, which gave me the basic prototype background I needed.

Why 1982?
Several factors led to choosing this specific modeling era. Kansas City Southern dropped the use of cabooses around 1982 and I prefer to run trains with a caboose on the end. In 1982 there was still BN traffic on the Ft. Smith Branch, providing an interchange opportunity! The Missouri Pacific had not yet been fully absorbed into Union Pacific, which meant more interchange traffic for KCS.

I enjoyed the mix of motive power, which included a handful of first-generation diesels like GP9s and F-units, as well as plenty of modern second-generation diesels like GP30s and SD40-2s. The white paint scheme was unique and interesting, but regrettably hard to find commercially, so we’ve been doing a lot of painting! Modeling the early 1980s also means a greater variety of rolling stock. 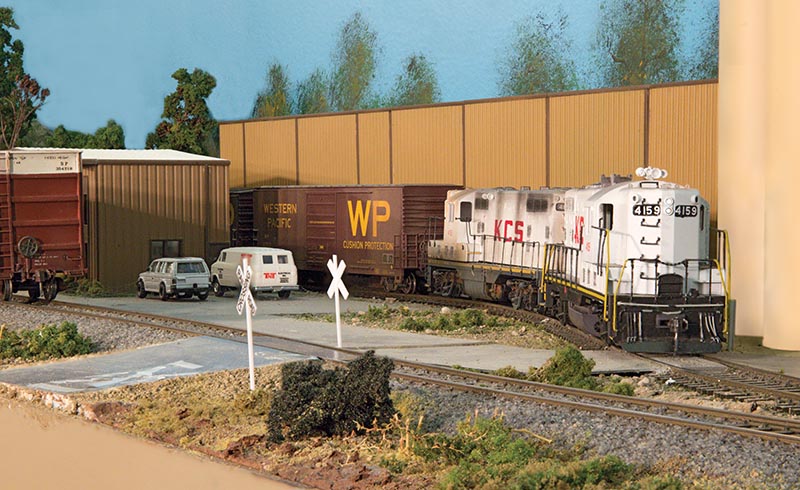 Today’s Fort Smith Dodger, with first-generation EMD GP9 4159 on the point, switches out the Modern Carpet plant at North Poteau. The building was kitbashed by Tom Vanden Bosch.

Design Goals
The model railroad resides in a 45×60 ft. outbuilding which was already divided to afford a maximum layout space of 30×60. I knew right away I wanted to employ a linear walkaround design. Operators are able to follow their trains throughout the run without having to stop, walk around the layout, lose sight of their trains, or traverse a helix. Generous four-foot aisles allow operators to pass each other comfortably.

The railroad operates as a virtual point-to-point system with automatic restaging of trains. For example, loaded coal trains, which always ran south on the KCS, are ready to run south again without physical restaging or moving trains between operating sessions. Placement of industry sidings and spurs follows the prototype, using the SLIC book as reference.

I wanted to host road, yard, and local switching operations, and have era-appropriate CTC signaling on the main lines. Our schedule of trains follows the prototype as closely as possible…