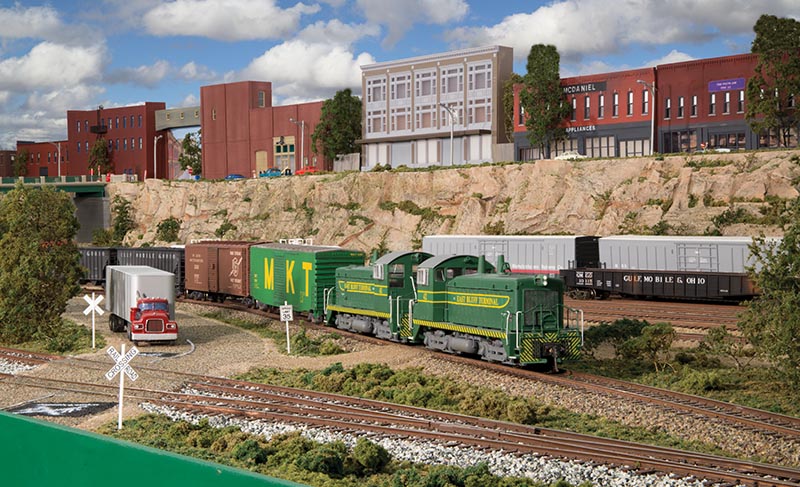 East Bluff Terminal SW1200 numbers 41 and 42 head out of the yard for the main line with a cut of cars to switch the industries at the south end of town. 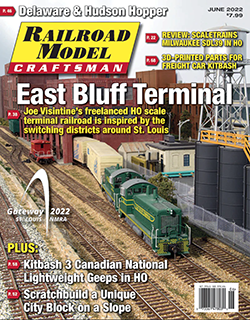 By Joe Vistintine/photos by Dan Munson

I was raised in East St. Louis, Ill., along with my two sisters and two brothers. Every Christmas morning the American Flyer trains would appear under the tree. Presents had to wait till my brother and I got the trains running! A few years later I was allowed to set up all the trains on the basement floor for extended periods of time. My brother-in-law later bought me my first HO scale set and my dad set up a 4×8 sheet of plywood for me in the basement. I enjoyed adding buildings, roads, and more track until I finished high school and was drafted, putting my hobby career on hiatus.

In 1985, while living in Central California, My wife and I were walking in a mall and came across a modular HO scale layout by the Monterey & Salinas Valley Railroad Modeling and Historical Society. I was invited to see the club’s layout in Marina, Calif. I joined the club and started to build two 6-foot modules that would fit perfectly in the back of my El Camino.

In 12 feet I was able to fit in a nice yard, engine house, and background buildings. The club exhibited the modular setup at train shows around the San Jose area. It was also the start of the design for what would eventually become the East Bluff Terminal. At our last home in Salinas, I had a double-deck HO scale railroad in a 10×12 foot bedroom, an expansion of the EBT modules. 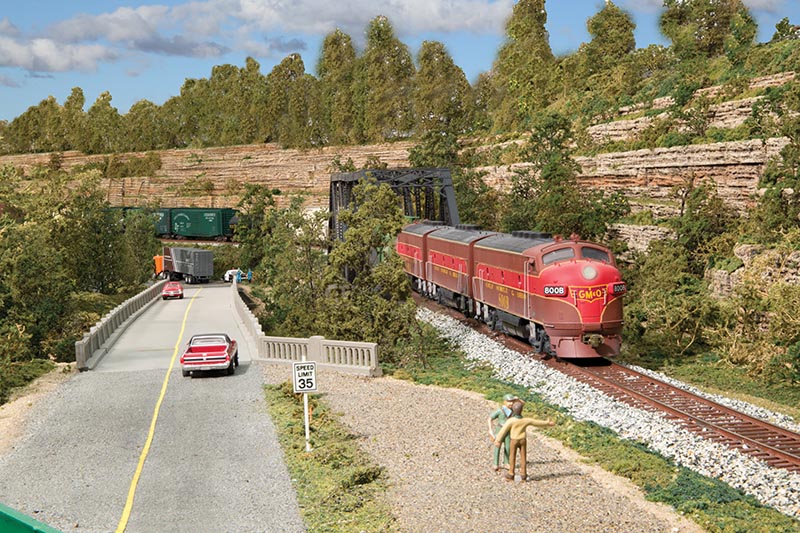 ABOVE: A southbound Gulf, Mobile & Ohio freight crosses the freshwater estuary, bringing cars to be classified at East Bluff.

The fictional East Bluff Terminal Railroad is located south of East St. Louis along the Bluffs of the Mississippi River just off the Gulf, Mobile & Ohio main line, set in the early 1970s before the merger with Illinois Central. I had no interest in building a prototype layout. I always liked doing things my way and sometimes it got me in trouble. The GM&O is my favorite railroad and if I can use prototype equipment in a scenario that looks believable, then why not?

The Layout
In 2012, we moved back to St Louis to be with family. We bought an empty lot and constructed a new home, complete with a large basement to build the next EBT. After finishing the basement with an office, full bath, storage room, crew room, workshop, tool room, and a 15×44 ft. train room, construction on the layout began in January 2014. 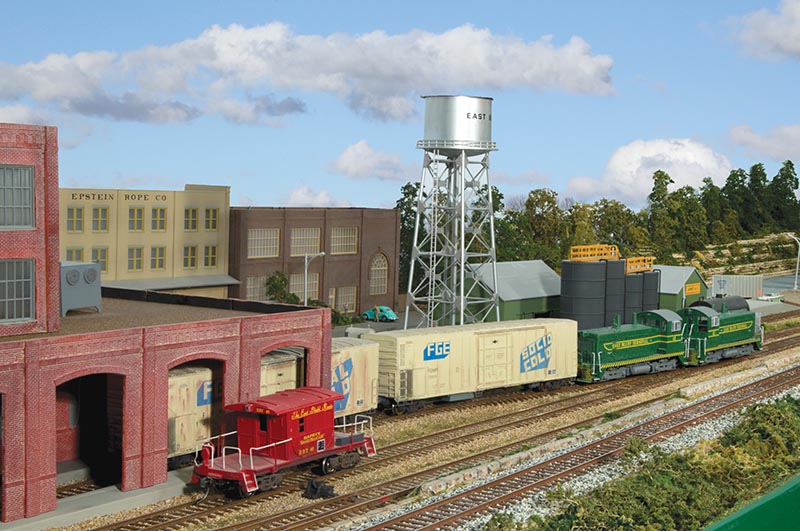 ABOVE: Two switchers pull empty reefers from the cold storage plant, while the crew’s transfer caboose occupies the main line.

Studs were lag-bolted to the walls to provide support for the 1×4 inch open grid frames, which were attached and supported with long 1×4 bracing to eliminate legs. Only the 10-foot peninsula has four braced legs for support. Plywood was used as a base where needed, and left open for different scenery elevations. While I did most of the work on the layout myself, I do bring in friends from time to time to help.

The staging yard was built in an adjacent room and connected through the wall with a wye. PECO Code 100 track and turnouts from my old layout were used for staging. The twin coil-controlled turnouts use push buttons controlled by a 52-diode matrix to select the desired track. The coils are protected from burnout by a homemade capacitor discharge circuit…

Read the rest of this story in the June 2022 issue of Railroad Model Craftsman. Subscribe Today!