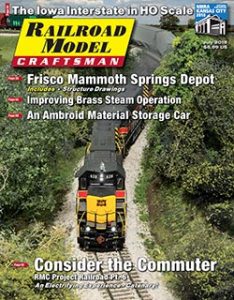 By Joe Atkinson/photos by Dan Munson

The Iowa Interstate Railroad (IAIS) took over a large section of the former Rock Island from the Iowa Railroad on October 10, 1984. The IAIS started operating from Council Bluffs, Iowa, east to Bureau, Illinois, then south into Peoria, and east to Chicago on trackage rights over CSX, which had acquired the Rock Island from Blue Island to Bureau. IAIS has created a thriving operation from the ashes of the Rock Island and to this day is a survivor of mega-mergers all around them.

The west end of the IAIS cuts across the rolling hills and valleys of western Iowa. This fertile ground supports the strong agriculture in this region, as well as pockets of industry — IAIS’ customer base.

If you have spent any time observing, railfanning, or photographing IAIS’ west end, you know of its key locations, including the interchange with other roads in Union Pacific’s Pool Yard in Council Bluffs. Additional points of interest are the two-stall engine house and small yard lined with containers farther east in Council Bluffs, the large grain elevator and old branch line at Hancock, Iowa, and the small yard and industries at Atlantic, Iowa. Joe Atkinson has beautifully recreated all these locations in great detail on his HO-scale IAIS. 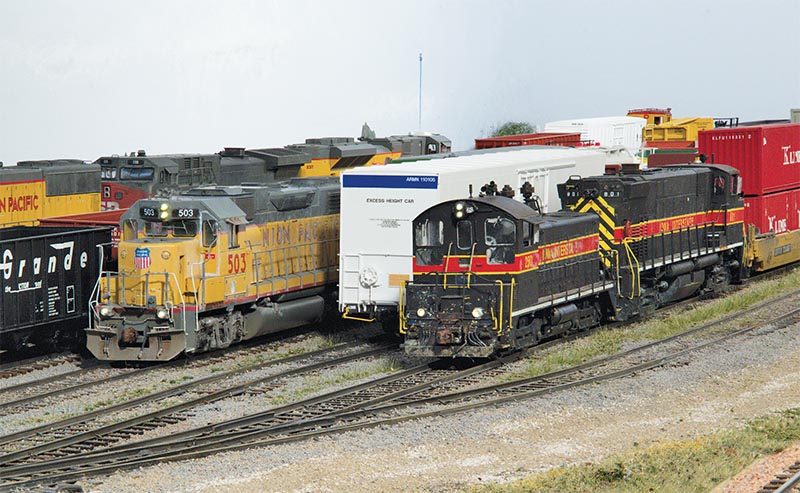 IAIS’s only switcher, SW1200 250, is paired up with M420 R 801 to pull a transfer cut out of Union Pacific’s Pool Yard in Council Bluffs, Iowa, while UP power waits to come out on the lead.

Joe didn’t start out modeling Iowa Interstate; he began construction on his railroad planning to model Union Pacific. Joe is a great fan of the SD40-2, and he wanted to amass a small fleet of these EMD locomotives in UP Armour Yellow and Harbor Mist Gray. Even as a big fan of the Dash 2s as he was, though, he grew bored with their lack of variety.

Joe is a native of Council Bluffs but paid little attention to the upstart regional railroad on the southeast side of town, until a trip to Atlantic, Iowa, in 2000 sparked his interest in the IAIS. As Joe continued to research and observe the IAIS, he found the short line’s eclectic locomotive roster very appealing. It didn’t hurt that Union Pacific ran detour trains over IAIS when large maintenance- of-way projects or derailments limited the use of UP’s parallel route across Iowa. Joe could have motive power variety and include UP trains and motive power on his layout — a win-win.

Joe models the IAIS in May 2005 — a time he spent on the prototype line railfanning and documenting its operations. One aspect that really drew him to the IAIS was the friendliness of the employees. Joe says he has been blessed with their support in answering his many questions as he attempts to recreate this portion of the IAIS in 1/87 scale…

Read the rest of this article in the July 2018 issue of Railroad Model Craftsman!