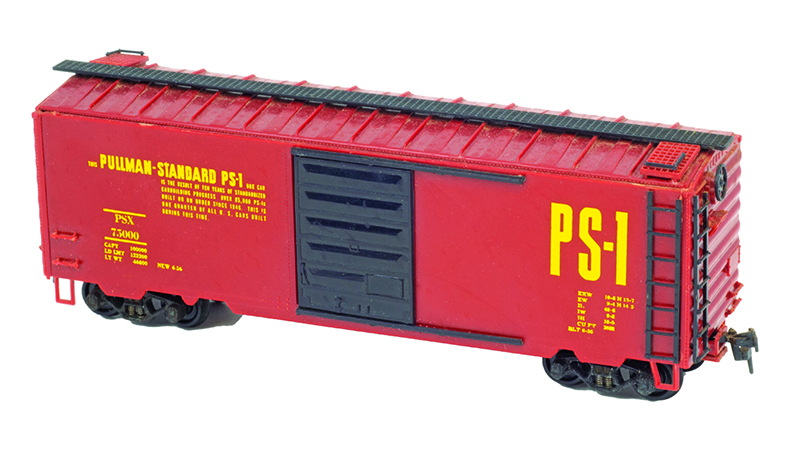 How many HO boxcar models released in the 1950s could you get away with operating today? The Kurtz Kraft effort at Pullman-Standard’s PS-1 40-foot prototype can pretty much still hold its own in comparison to contemporary models… quite a feat!

Do you have a sample of Kurtz Kraft’s HO-scale boxcar? This model debuted in late 1956. It’s a plastic reproduction of Pullman-Standard’s PS-1 prototype, which itself was a fairly new car on real railroads at the time. Kurtz Kraft freely shared with hobbyists this prototype information in its promotion of its model at a time when you might be tempted by the vague “Alco Road Diesel” with no additional details telling you Hobbyline’s release was an FA-1. Kurtz Kraft accurately specifies this offering’s origins as a PS-1 boxcar, and its model was the first high-quality plastic release for this type of freight car in HO scale.

The kit came with separate ladders, grab irons, running boards, and other details and the release carried a 79-cent retail for an unlettered example molded in Boxcar Red styrene that came without trucks. Decorated boxcars were also offered for 89 to 98 cents. Kurtz Kraft proudly promoted the rendering as the work of Jerry White, who the company stated was “a top-notch specialist in custom-model building.”

Despite these positive attributes, I don’t think Kurtz Kraft’s release had the impact you might expect on the hobby market. Surprisingly, few modelers in the mid-1950s seem to have flocked to what is a boxcar that could easily run with contemporary releases — an impressive feat for a 1950s tooling. Most model railroads of the day were populated by basic 40-footers, such as the Kurtz Kraft competitors Hobbyline/John A. English; Mantua-TYCO; and Gilbert (see photo on opposite page). No products of the time compare well to the accuracy of Kurtz Kraft, yet were very typical of what represented this style of very common freight car available to modelers in the 1950s, and all apparently well outsold Kurtz Kraft’s “Cadillac” of a boxcar model.

Examining Kurtz Kraft’s boxcar today, you’d likely give it passing marks but not be that blown away by it. Remember this HO boxcar’s mid-1950s competition included the likes of pretty basic efforts from Athearn, Mantua, Varney, and others. Those efforts molded on the bulk of details, other than maybe running boards on the roof (though not in all cases) and a brake wheel (again, not in all cases) on the B-end of the car.

The Kurtz Kraft model, promoted as being made of “high-impact styrene,” included floor, sides, ends, roof, doors (Superior-style design), and additional details. To my knowledge, no weight was provided for this model (though the builder could put down a slab metal weight on the floor of the boxcar’s interior). This boxcar kit came with plastic “dummy” or non-working knuckle couplers. The instructions guided the builder through installation of then-current and mostly also new coupler options, such as Baker, Kadee, Mantua, Model Die Casting/Roundhouse, and Rail Line (noted as being NMRA X2f type). The fidelity of the tooling is impressive, even by current standards. The use of molded plastic spurs to deliver the ladders and grab irons made for some challenging cuts, and the grab irons especially won’t take much abuse without snapping or bending beyond use. I have samples in my collection that are Boxcar Red and Black molded plastic and I do spot some warpage on ladders on select sprues. So, they weren’t perfect by any means. 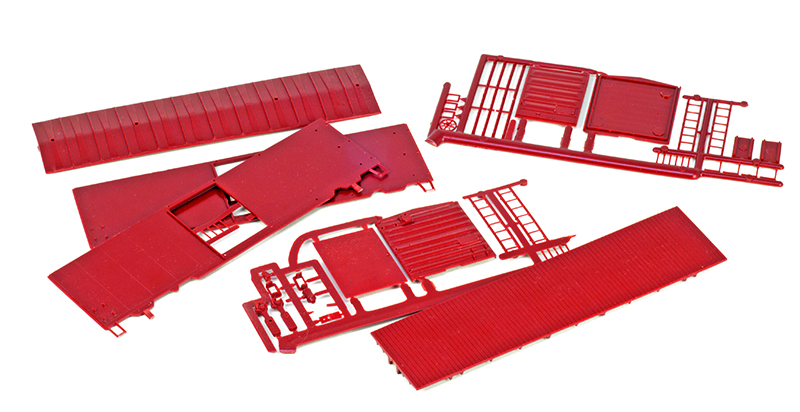 Kurtz Kraft returned with a 40-foot refrigerator car model as the follow-up to its boxcar release. The ice-hatch reefer presented a steel prototype and was designed along the same lines and level of quality and detail enjoyed by the hobby company’s boxcar. However, the fate of this reefer was the same as that of the company’s boxcar, gathering dust at hobby shops across the country. My dad mentioned that, in the 1970s, it was not uncommon to find a stack of what looked to be original 1950s-issued Kurtz Kraft boxcar kits lying forgotten on store shelves. And keep in mind, by the 1970s the asking price of under a dollar was looking better and better.

Based in Redwood City, Calif., in the San Francisco area, Kurtz Kraft produced signals, switch machines, switch stands, marker lamps, and other items, in addition to its PS-1 sliding-door boxcar and ice-hatch refrigerator car. The tooling for Kurtz Kraft’s boxcar and reefer models did see a return in the hobby, Cannonball Car Shops being a source for a later run of the model.

Jumping into the 1960s, Roco’s assembled 40-foot boxcars (introduced in the early 1960s and imported by Associated Hobby Manufacturers) are about as good a representation of Pullman-Standard’s PS-1 as Kurtz Kraft’s model… and came ready-to-run. Roco also produced a 40-foot plug-door boxcar of similar design. There are variations to this tooling over the years, which include editions with molded-on ladders. At the time, outside of Kurtz Kraft’s two freight cars and Roco’s attempts (which would not become standard for the company or others essentially; and molded-on ladders and other details would continue to be the norm for most models for many years to come), you could find something approaching this better level of detail from the line of Ambroid/Quality Craft kits. However, those offerings with their wood components, rather crude overall design and challenging build left many modelers wanting more.

The next vintage kit offering that comes to mind that follows Kurtz Kraft’s design approach would be the Golden Spike 50-foot mechanical refrigerator model introduced in the 1960s. This tooling debuted from Pacific HO and was included in Silver Streak’s catalog (which was largely populated with metal component releases), and later was part of Walthers’ line by the early/mid-1980s.

This Golden Spike effort was also flat-stock plastic with separate details. The company promoted its mechanical reefer as, “for the modeler who wants the best.” And this mid-1960s release was a truly good effort. Several road names were offered, and the offering came with “low-contour” RP-25 brass wheels, preformed grab irons, and Cal-Scale AB-type brake set. The kit carried a $3.45 suggested retail in 1964, which is on the pricey side for an HO release at the time, especially when compared to $2.00 Athearn kits. The sales of the Golden Spike reefer also appeared to be lackluster and made only modest impact, in comparison to Athearn’s “blue box” mechanical reefer models that showed up around the same time.

Why was this Kurtz Kraft boxcar impressive? Each of these three HO-scale boxcars came out at approximately the same time (mid-to-late 1950s) as Kurtz Kraft’s effort. Besides molded-on ladders and other details, the fidelity of the tooling is only fair, and proportions perhaps suspect in some areas. The models are from John English/Hobbyline (Western Maryland on left), Mantua-TYCO (green General American, center), and Gilbert/American Flyer (Rio Grande “Cookie Box” on right).

Another freight car kit of the quality level and intricate design pioneers by Kurtz Kraft and the Golden Spike Series didn’t find its way to the hobby until the late 1970s. Though Athearn wasn’t introducing freight car models with a higher level of separately added details for its own line, it was doing so for another company. Known for its line of detail parts that helped make locomotives, rolling stock, and other aspects of a model railroad look more realistic and accurate, Details West introduced what it called “the finest freight car kit ever offered in HO” in early 1979. Produced by Athearn, the model reproduced Evans/United States Railway Equipment’s modern 50-foot double plug door boxcar. The model debuted with six roads and an undecorated kit, each carrying a $5.25 suggested retail price. A review noted the kit included “a major departure” from what was standard at the time by presenting the car’s ladders as separate pieces. I remember buying several of these Details West double plug door boxcar kits and also examples of the handful of follow-up releases. By 1982, Details West’s roster had expanded from the double plug on to an insulated single plug door and a combination (plug/sliding door) boxcar kits.

E&B Valley introduced a General American Airslide hopper in mid-1983 that included a finer level of detail than many other HO freight car models of this variety. The kit retailed for $6.95 (with trucks and couplers included), though unlike the bar-raising boxcar kits from Details West and McKean Models, E&B went the flat stock route versus providing a shell as you got with the Athearn-made Details West offerings.

Following these releases, the hobby did start to elevate quality for freight car models in HO during the second half of the 1980s and later, though many of the major hobby companies didn’t join the club of offering loads of separate details until the 1990s or later. For example, Walthers had the tooling for the mentioned mechanical reefer and a similarly well-down, flat-stock 50-foot plug door RBL boxcar by the early 1980s. The company sold those models and also offered a flat stock general purpose gondola with a good level of detail.

However, as Walthers intensified its efforts in HO rolling stock, the company went with reintroducing Train-Miniature’s tooling (with the typical molded-on details) and its own new-tooling releases would largely stick with the established level of quality found in typical Athearn or Model Die Casting/Roundhouse rolling stock kits.

I mentioned previously we wouldn’t see the hobby begin hitting this higher mark on a regular basis until the late 1990s and early 2000s. Not every attempt was stellar, but overall HO freight car models continued to enjoy many great improvements. Some examples of those offerings would include Life-Like’s Proto 2000 series of freight cars (now WalthersProto releases), Kadee’s PS-1 40-foot boxcar, and Athearn’s PS-5344 boxcar, as well as models from Branchline Trains (now offered in assembled and kit version from Atlas), Ertl, Red Caboose (now part of InterMountain Railway’s line), and others. 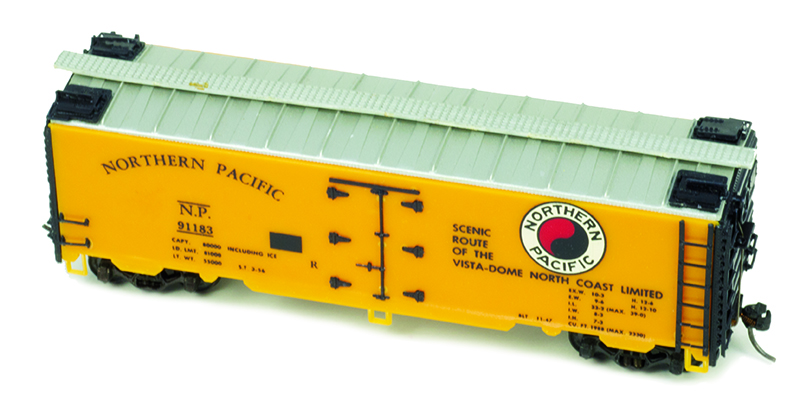 The sequel to Kurtz Kraft’s PS-1 boxcar was a 40-foot steel ice-hatch reefer. Shown here decorated for Northern Pacific, the design style was similar with all major plastic pieces arriving decorated and lettered with a wealth of details included. Like the company’s boxcar, this release came without trucks and functioning couplers.

Ahead of its Time?

Looking at Kurtz Kraft’s two HO-scale rolling stock efforts, I’ve always wondered why this didn’t “raise the bar” for the hobby? Why didn’t Kurtz Kraft go on to produce a catalog of similar quality rolling stock rivaling the variety of Athearn, MDC/Roundhouse, and others? Instead, these quality kits seemed to largely languish for years and go ignored to a degree. The same situation holds true for Golden Spike kits of the mid-1960s. And I’ve been told that McKean’s introduction of its 40-foot boxcar with separate details was met with howls from some modelers that said you can’t be seriously considering trying to sell this kit for nearly ten bucks!

What’s your take on this? Was the flat stock design too challenging? Were these kits priced against market norms? Or is there a seldom-spoken secret that many “craftsmen” never build anything? I think there are many other factors involved that held back a push toward higher quality for HO-scale rolling stock. I welcome readers’ comments on what I consider an interesting and perhaps somewhat controversial topic. The one point that it easily agreed on would be that the hobby is always evolving and generally improving, and thus is always fun to watch and participate.