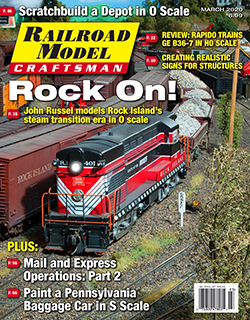 It certainly wasn’t the first Burlington Northern diesel offered in HO, but it is the only HO diesel that I’m aware of promoted by famed singer Johnny Cash. The mid-1970s model is incredibly common (and the shell’s tooling remains available today in revised form), but equally important to the hobby. Do you know what diesel locomotive I’m describing?

This year marks a half-century since Burlington Northern became official. The long-sought combination of the “Hill Lines” became reality at the beginning of March 1970. The new decade would be a tumultuous one for railroading. While Penn Central and the eastern railroad network would melt down in a disaster that found the U.S. government rescuing the situation with the 1976 formation of Conrail, this major consolidation of western railroading enjoyed an opposite fate. By the conclusion of its first decade, Burlington Northern had not only survived and prospered, but expanded its reach all the way to Florida with the 1980 addition of the St. Louis-San Francisco Railway (“Frisco”) to its system.

In miniature, BN’s Cascade Green livery and modern herald (developed by New York industrial design firm Lippincott & Margulies) began appearing not long after the road’s 1970 debut. The scheme itself arrived early in anticipation of the merger and served as Chicago, Burlington & Quincy’s short-lived final look sans “BN” heralds and “Northern” in the name.

The 1970s was an unlikely boom period for HO scale. After becoming king of the mountain with respect to model railroading scales by 1960, HO took some knocks beginning in the early 1960s. First the slot car craze took a bite out of the model train segment of the hobby in the early 1960s, then N scale went from virtually unknown to a major player by the end of the decade. 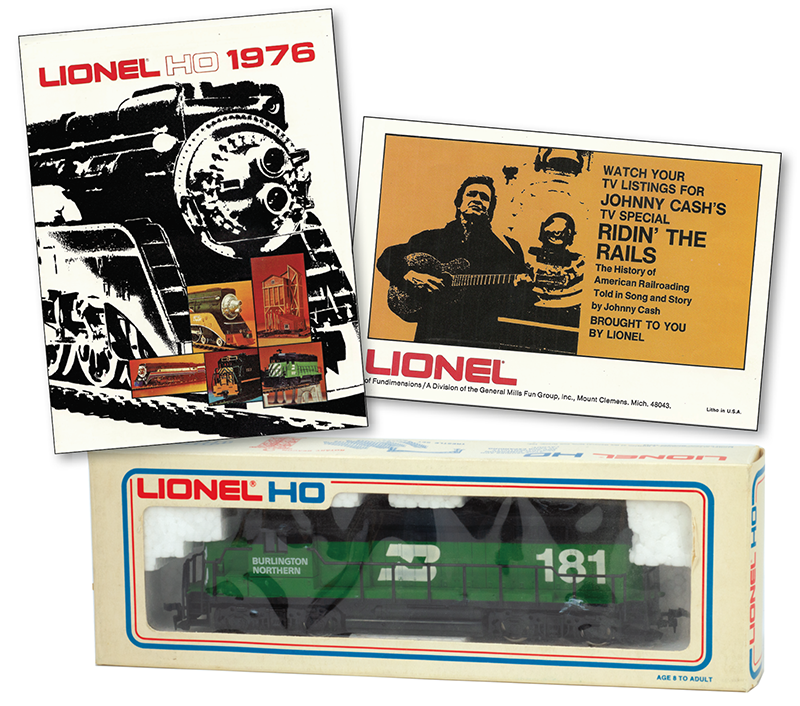 Lionel’s 1976 HO scale catalog included a Burlington Northern GP30 on the cover, but it was a custom-painted stand-in, not the actual production model. Singer Johnny Cash was hired to promote Lionel trains, and mentioned the HO “Burlington 181” by name in nationally televised commercials. —Author’s Collection

As the 1970s dawned, HO scale saw a renaissance with several new players entering the 1:87 model train category. Among those was Lionel. The venerable toy train company had been away from HO scale since the mid-1960s. Lionel’s first foray into HO came in 1957 and lasted through 1966. For its second round, Lionel HO enjoyed a run from 1974 through 1977 (See “Lionel HO for the Ages,” Fourth Quarter 2018 HO Collector).
Lionel wasn’t the first model train manufacturer to decorate an HO scale diesel locomotive model for Burlington Northern; that credit appears to go to TYCO. In Lionel’s 1976 HO catalog, you’ll find among train sets “The Burlington” (5-2682). This train set is the only catalog appearance that year for an all-new Electro-Motive Division (EMD) GP30 diesel locomotive model. If you page through the catalog, you’ll quickly realize this BN GP30 is not a production Lionel example; instead, a custom-painted brass import pinch-hits in its place. It’s this same brass model that co-stars with Johnny Cash in a 1976 television commercial. The commercial largely promotes Lionel’s O gauge line but does show the brass BN GP30 with Cash stating, “Lionel also makes HO gauge trains for older kids like this Burlington 181.”

At the time of this GP30’s introduction, Lionel’s HO line was coming from a number of subcontractors in addition to Lionel’s own manufacturing facilities. The HO diesel roster included an Alco FA-1 (employing a variant of the 1950s John English/Hobbyline shell), an EMD GP9 that was a near clone of Athearn’s tooling introduced in 1957 (and different from the GP9 tooling of its own manufacture sold by Lionel during the early to mid-1960s), and an all-new General Electric U18B (with shell molded in Canada and assembly by Lionel’s Mt. Clemens, Mich., facility). The only steam locomotive in Lionel’s HO collection was the impressive looking Southern Pacific GS-4 Northern 4-8-4. This steam locomotive was Lionel’s first motive power collaboration with Kader in Hong Kong. Lionel contracted select HO production with Kader, the parent company of Bachmann Trains, and in addition to its GS-4 Northern came an EMD GP30 diesel locomotive model. Kader would also produce several rolling stock releases for Lionel’s HO line during the 1970s.

What Lionel accomplished with its Burlington Northern GP30 is somewhat astounding. Though cataloged only in 1976 and 1977, production numbers on these BN GP30 models must have been at near record levels for any diesel locomotive reproduction of this era. Keep in mind, the 1970s saw large runs of many releases, such as the onslaught of models decorated for the American Bicentennial. The train set inclusion, which in its second year in the catalog carries the name “The Burlington 181”and separate release (though never cataloged) put so many examples on the market that you’ll still find this GP30 rendering easy to obtain in new mint-in-box examples 45 years after release! 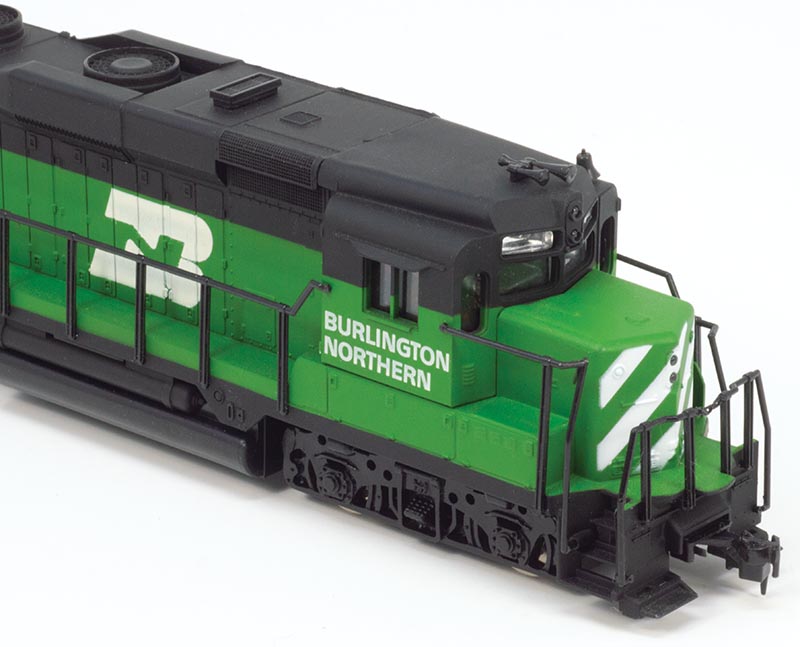 This Kader-made GP30 was well above average with respect to the shell’s tooling. The model possessed scale-width hoods with good detail. There are two shortcomings that serve as spotting features for this GP30 shell. On the long hood, you’ll find non-prototypical wide spacing of the trio of fans located over the radiator section on the unit’s roof. Those three fans should reside closer to each other. If you look at the upper headlight between the number boards, you’ll see the vertical lights evenly positioned across this vertical panel; this spacing is too wide. The lights should sit closer together and find themselves oriented toward the top of this panel between the number boards. Though for 1970s tooling, this GP30 has more positive attributes than negative. In addition to the mentioned scale-width hoods, the pilots are mostly complete (frame-mounted couplers didn’t swivel side-to-side and necessitate open pilots that detracted from many releases of this era), which enhances the appearance.

Lionel’s practice of using a product stock number for the locomotive or freight car’s road number found application for most of its 1970s HO releases. However, this BN GP30 didn’t receive this type of number. The “181” in the train set’s name refers to the number of pieces in the set. The box lid stated this Lionel release was “a giant 181 piece train set” and featured “the new GP-30 diesel engine.”

That three-digit number found its way in large white numerals to the rear section of the long hood sides on Lionel’s BN GP30. The reproduction of Cascade Green bordered in black follows BN practice fairly faithfully; though the sill along the sides of the unit should be green with only the pilots presented in black, versus the model’s presentation of black from the top of the sill down all the way around the unit. The white stripes running across the nose are well done; however, the cab and long hood play loose with BN’s herald and name presentation and placement. A modestly sized BN herald should appear below the side cab windows with the road name spelled out in all capitals below the herald. Lionel’s lettering went a bit large and flashy and placed a big BN herald behind the cab on the long hood and a slightly oversized road name appears where the herald should reside on the cab sides.

After Lionel exited HO after the 1977 season, the supply of GP30s remained and deals could be had on this release. A July 1978 advertisement shows Denver’s Hi-Country Brass promoting Lionel’s “The Burlington” train set for $26.95. Another 1978 ad from Hobbies For Men of Beacon, N.Y., offers $7.99 for the model with the store’s choice of road name. Speaking of road names, there weren’t many. Lionel offered a Santa Fe red-and-silver Warbonnet GP30 for a Sears-exclusive set offering. The 1977 Lionel HO catalog features a blue Conrail GP30 on its cover, but that is the only appearance with no listing inside for separate sale or inclusion in a train set. According to Greenberg’s Guide to Lionel HO, Volume II 1974–1977 (1993, Greenberg Publishing), those Conrail GP30s may be BN-decorated shells that were repainted. In Canada, toy maker Parker Brothers distributed Lionel HO and you’ll find an Action Red CP Rail GP30 was part of that line. 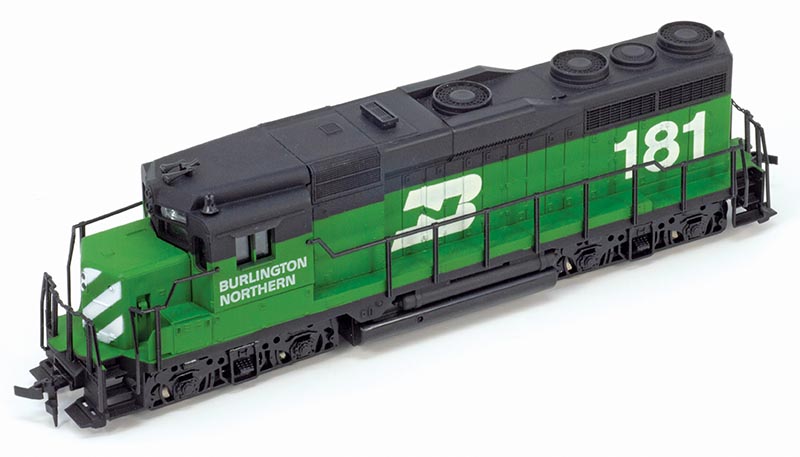 If you’re a Burlington Northern enthusiast, Lionel’s GP30 is a great item to have in your collection. I have at least a couple of mint examples in my collection, as they turn up often and it is a favorite 1970s model of mine. Lionel’s “The Burlington 181” set is also a great souvenir from the 1970s. The set came with an over-and-under track plan with brass section track, bridge and trestle set, telephone poles, road signs, and power pack. The consist included a Pittsburgh & Lake Erie covered coil car, Dow three-dome tank car, Grand Trunk Western sliding-door 40-foot boxcar, BN four-bay coal hopper, and BN standard cupola caboose.

That 1970s HO boom saw many of these new and expanding product lines take advantage of “merger mania” bringing new names and colorful paint schemes to the somber North American railroading scene. There’s a heavier mix of Chessie System, CP Rail, Illinois Central Gulf, and Penn Central as well as Burlington Northern among the offerings of this decade. Among all those early Cascade Green efforts, I would select this Lionel HO GP30 as Burlington Northern’s most famous diesel locomotive model.

This article appeared in the March 2020 issue of Railroad Model Craftsman. Subscribe today!