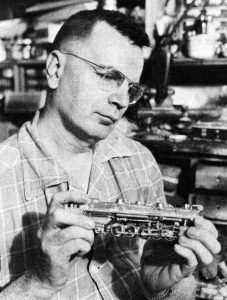 Bill Schopp left us on March 23, 1974; succumbing to a rheumatic heart condition which he had been fighting since 1921. Bill was a youngster when he was presented with his first tinplate train: a Bing clockwork set, in 1916. By 1935, Bill was reading (Railroad) Model Craftsman and other publications, when he met HO pioneer George Stock (who, together with Eric LaNal, had gone into HO around 1928). As a result of the visit with George Stock, Bill bought an early HOwen reefer kit, the only car kit Bill ever bought other than trolleys. Bill’s first article on building a single truck HO caboose appeared in the July 1937 Model Craftsman. By 1938 he had become an RMC regular, doing articles on car construction, special trackwork, locomotive construction and conversion, and layout design.

During his career, he wrote more than 1,000 articles on various model railroad subjects for Railroad Model Craftsman, Miniature Railroading, Toy Trains, Model Railroader and several British magazines. Some of Bill’s articles were published under the pseudonyms of John Kemp and Bill Willmore, as well as The Layout Doctor. Bill turned dealer in 1950, specializing in custom HO locomotives and selling out in 1972 due to ill health. Bill’s “Memoirs of a Former Model Railroader” appeared in RMC in four installments starting in the December 1947 issue. The “Former” in the title proved inaccurate because Bill was right back with a wide variety of new HO projects.

Bill taught junior high school in Philadelphia from 1937 to 1945, having graduated from State Teachers College in Trenton, N.J., in 1936, and Columbia University in New York in 1941. He also worked as a watch repairman and in experimental vacuum tube work. In 1940 he married the former Mildred Waiver, presently a teacher. His two sons, Walter, a mail carrier, and Robert, a hydrologist with the U.S. Geological Survey, are demon rail and photography fans as well as HO modelers. A daughter, Eleanor, also a teacher, is now Mrs. Ken Maik. A brother, Edgar, resides in Rancocas, N.J.

Bill was a pioneer in HO covered outside third rail, two rail, HO traction with operating overhead wire, and HOn3. His HOn3 pike may well have been the first in the United States. Bill Schopp was more concerned with putting ideas into action than he was in producing contest caliber models. He was also concerned with cramming as much track into minimal space as possible, because he had to do his railroading in the minimal space left to the apartment railroader. One time RMC Associate Editor Jeff Winslow recalls that Schopp’s penchant for small pikes made sharp curves mandatory, often far less than the then recommended 24-inch minimum radius, leading to Schopp’s organization: TSFTPOEFCOHORR, or The Society For the Prevention Of Eighty Foot
Coaches On HO Railroads.

George Stock, who sparked Schopp’s early interest in HO, recalls a gathering of railroaders at an early Schopp railroad session which brought Schopp’s sharp wit into focus. The meet was in a small two-room apartment in which the railroad shared space in the living room with a piano, stacked high with model railroad magazines, papers, tools, and paraphernalia. When someone remarked that the top of the piano was getting really overcrowded, Schopp commented that, “Yes it is, and I’ll have to see about getting another piano.”

Schopp was controversial because he would often do things in an antiestablishment manner. Once when a group of critics in New York organized an anti-Schopp society, Bill became one of the first members! For Bill, model railroading was always Fun. 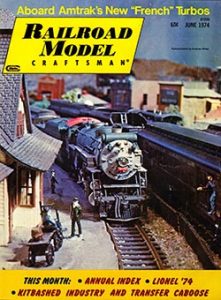 This article appeared in the June 1974 issue of Railroad Model Craftsman. Subscribe today!