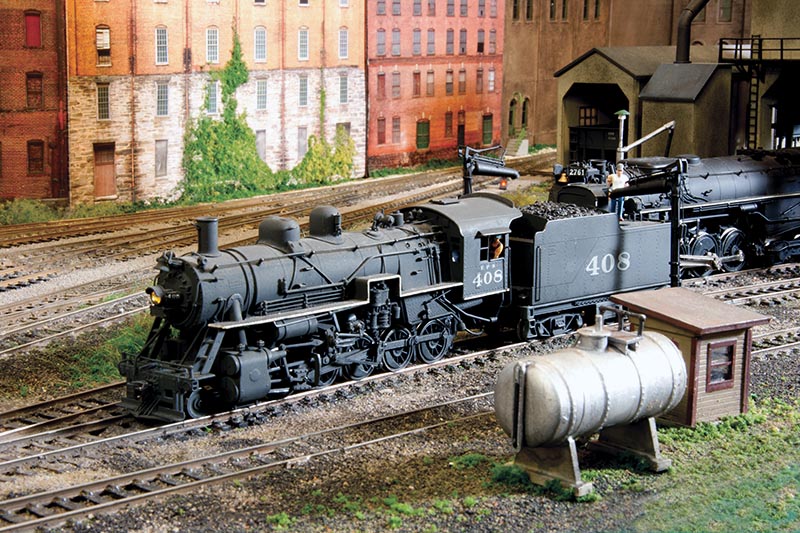 When we arrived at the Forest Park Southern roundhouse in Flowing Springs, W.Va., we saw the power for local freight Train 591 getting ready. The date is August 1955, and steam is making its final stand in the mountains of West Virginia.

By Bill Doll/photos by Chris Wermuth

The Forest Park Southern Railroad is my proto-freelance HO scale model railroad set in the Appalachian Mountains in the steam-to-diesel transition era of 1955. Much of what I model is inspired by the Chesapeake & Ohio. My story is that at one time C&O owned the line but could not turn a profit. Sold off to private interests in the depths of the Great Depression, the Forest Park Southern was formed. The new management was able to grow a successful railroad, while C&O retained trackage rights into the town of Flowing Springs. Besides hauling coal, the railroad also handles a lot of bridge traffic to and from the East Coast.

The layout is located in the basement, in a strangely shaped room roughly 34×49 feet. At one time I wanted to model the C&O, but after reading Allen McClelland’s series about his proto-freelanced Virginian & Ohio back in the 1970s, I knew I had to follow his lead! Construction on the current layout was started after we moved to a new home in 1993, and is still a work in progress. The best part of building this layout is the terrific friends I have made along the way.  Won’t you join me for a chase of a local freight?

In the summer of 1955 the Forest Park Southern Railway was still running a lot of steam power in the mountains of West Virginia. Chesapeake & Ohio was also running some steam, and their trains shared FPS tracks as far as Flowing Springs. With beautiful mountain scenery and plenty of railroad action, it was a great time to be a railfan with a camera and a car! 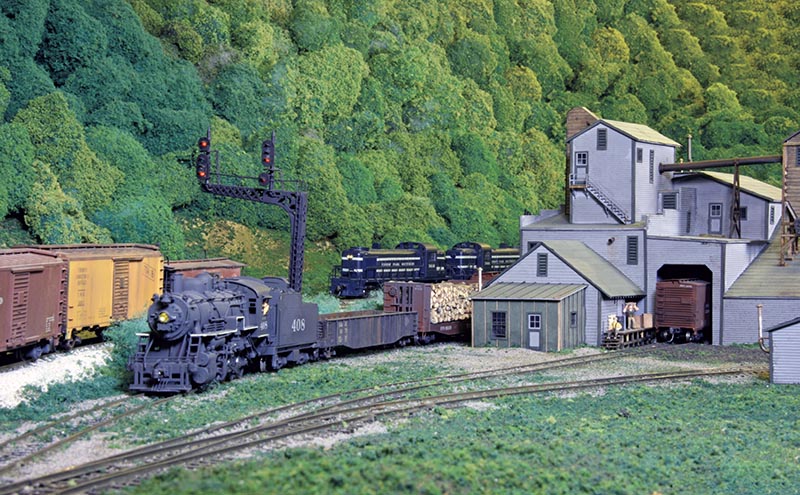 While holding the main to switch Dabler & Co., a westbound freight roared past, led by a pair of new Alco RS3 diesels.

On a warm August morning, around 9:00 a.m., we headed off to the FPS roundhouse in the town of Flowing Springs. We knew that the railroad would have local freight Train 591 called west at around that time. The power for 591 was usually a 2-8-0 or one of the 2-10-0 type engines which they recently bought from the Frisco. We checked in with the roundhouse foreman and discovered the power for today’s train was 2-10-0 no. 408. We felt that this would be a good time to follow the local and watch the crew going about doing the work of a local freight.

As we arrived at the roundhouse, we saw no. 408 at the water plug getting ready for the day’s run. When the crew had everything in order, the engine headed to the west end of the yard to get on its train.

When we arrived at the west end, the local power was stopped in the clear to allow an eastbound freight to pull into the yard. After the eastbound cleared, the Yardmaster gave the local crew permission to come out and get on their train and build up air. After a good air brake test was completed, Train 591 departed Flowing Springs yard. 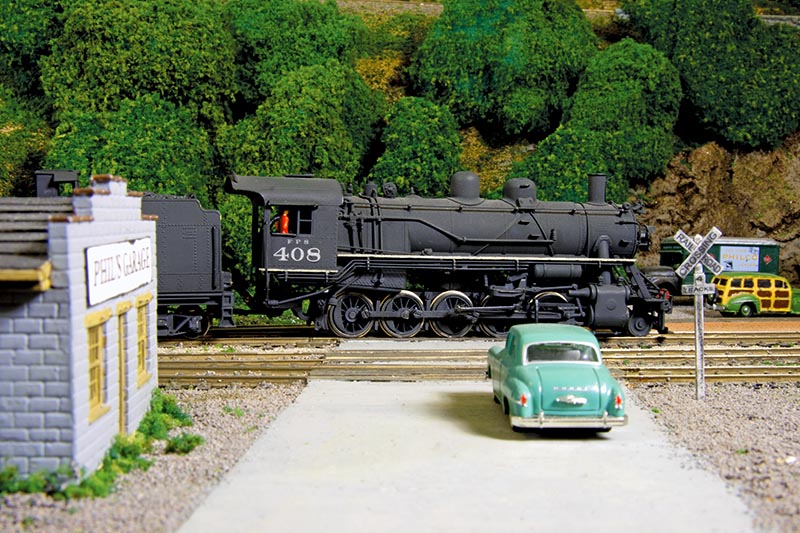 The local crosses the main highway through Orly.

When the train arrived at West Tower, they were greeted by a stop signal as an inbound passenger train pulled toward the depot, pulled by a sleek EMD E7 diesel. As soon as the passenger train cleared, a green-over-red signal came up for the local freight, which meant it was their railroad all the way to the town of Middlesburg.
The local crew spent about 90 minutes switching customers in Middlesburg. The town is home to a barrel manufacturer, a coal and oil dealer, a small steel foundry, a cabinet maker, and a team track with an overhead crane.

After about an hour and a half, the switching was completed and it was heading west again to the next stop, which was Random. A yard crew is stationed here, so the local crew didn’t spend much time on their set-outs and pick-ups. Random has a team track, meat packer, ice house, freight house, and a manufacturing plant to keep the crews busy…