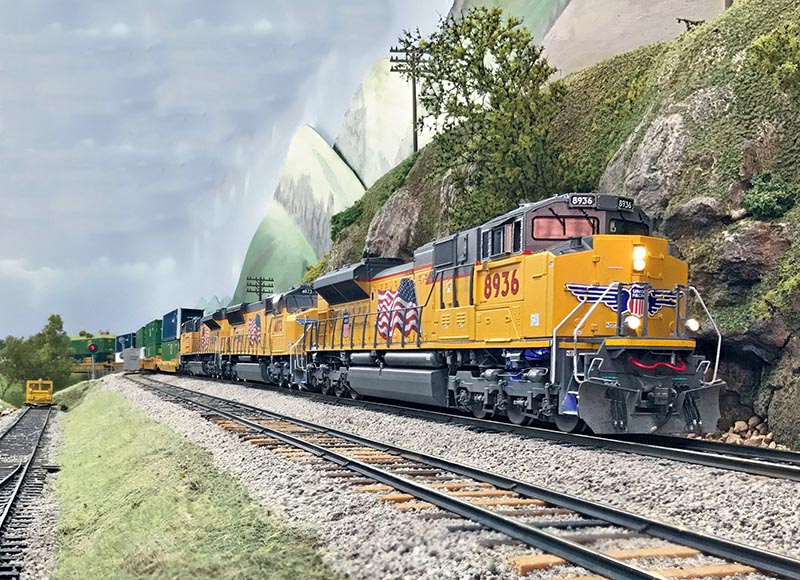 UP SD70AH 8936 charges through Niles Canyon with a westbound stack train on Seth Neumann’s Union Pacific layout. The 8936 is based on a heavily reworked Walthers SD70ACe model. Photo by Harry K. Wong 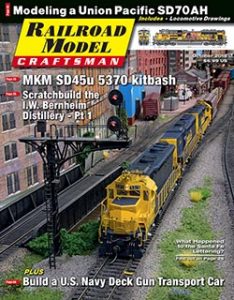 By Harry K.. Wong/photos as noted

In the October 2018 issue of Railroad Model Craftsman, you will find an article on how to accurately model a Union Pacific EMD SD70AH from the HO-scale Walthers Trainline SD70ACe model. This month on RMC’s Extra Board, we will expand upon the magazine article to provide additional prototype data and detail photos of Union Pacific SD70ACes and SD70AHs.

Looking at our model, the undecorated Walthers SD70ACe has a body shell meant to represent the most common customer-specified options popular across the majority of late production SD70ACes across multiple railroads, including BNSF Railway; Canadian National; Kansas City Southern; Montana Rail Link; Quebec North Shore & Labrador;  and UP to name just a few roads. The options provided on the Walthers model include a “isolated” cab design intended to provide greater comfort to the crew from noise and vibration, and depending upon the shell, a headlight mounted either above the cab windshield or down on the low nose.

This Extra Board feature will examine some of the additional spotting features that differentiate late-production SD70ACes and SD70AHs from earlier SD70ACes beyond just the headlight position and the “isolated” cab design. These idiosyncrasies include a new design for the traction motor blower compartment access door, the presence of a water level sight glass, and beneath the sill – different air filter assemblies and the presence of electrical charging receptacles. Unlike other roads, Union Pacific also prefers a pair of sand filler locations instead of a single sand filler at the rear of the long hood across their entire SD70ACe fleet.

SD70AH vs. Late SD70ACe – What’s the Difference?
By now, you may be wondering what the difference is between an late-production SD70AH vs. a standard late-production SD70ACe. Externally, there do not seem to be any differences other than the road numbers. UP SD70AHs are numbered from 8824 to 9096. Internally, however the story is quite different. Weighing in at a whopping 427,000 lbs., SD70AHs boast the following additional improvements including Tractive Motor Control for optimum adhesion, Automatic Rail Conditioners (air jets that clean the rail ahead of the wheels), Smart Consist Fuel and Power Control, and Cruise Control.  That said, let’s now take a look at some of the external visual differences among UP’s entire SD70ACe/SD70AH fleet. 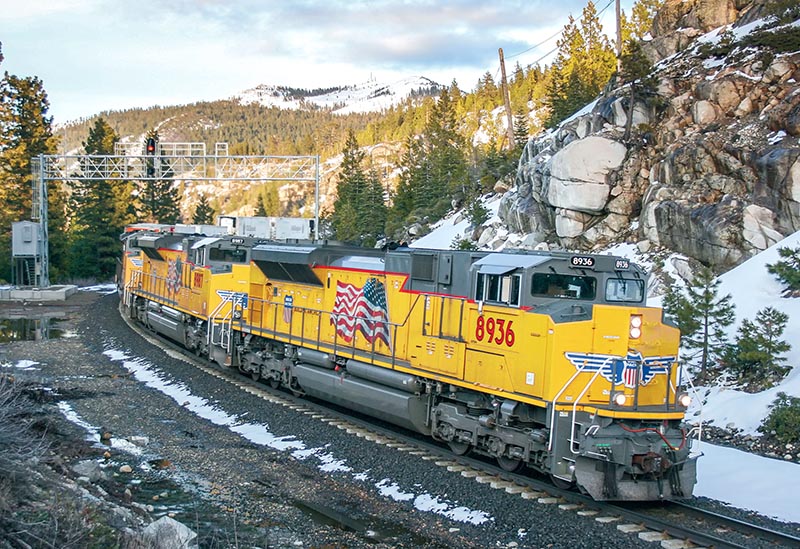 Photographer John Gaffney captured SD70AH UP 8936 at Yuba Gap, Calif., on March 22, 2016 leading a westbound intermodal train over Donner Pass. Combined with the author’s sighting of this same unit on the point on a different Z-train, this photograph cemented this author’s resolve to model this locomotive. Photo by John Gaffney 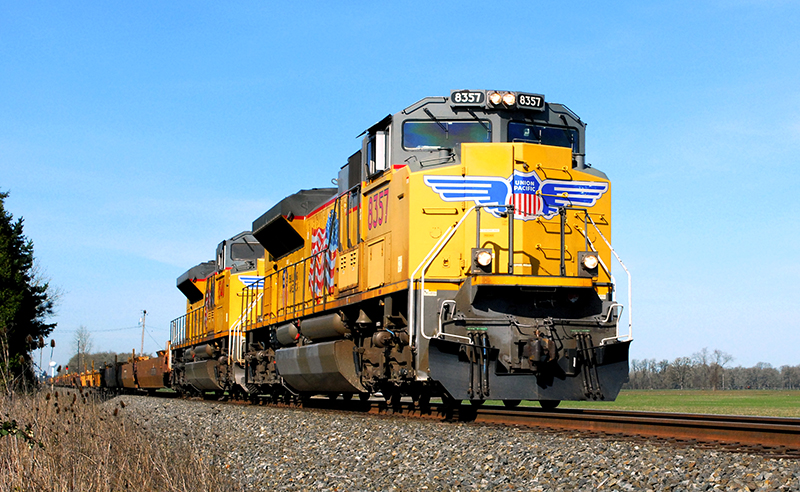 In contrast to the later SD70AH, nearly 40% of UP’s SD70ACe/AH fleet is comprised of units with the front headlight mounted atop the cab instead of in the nose. Of 788 units in total, Union Pacific rosters 312 SD70ACes equipped with the high mounted cab headlight. UP SD70ACe 8357 is the leader on this southbound “bare table” repositioning train at Junction City, Oregon on March 8, 2012. Photo by David Lange 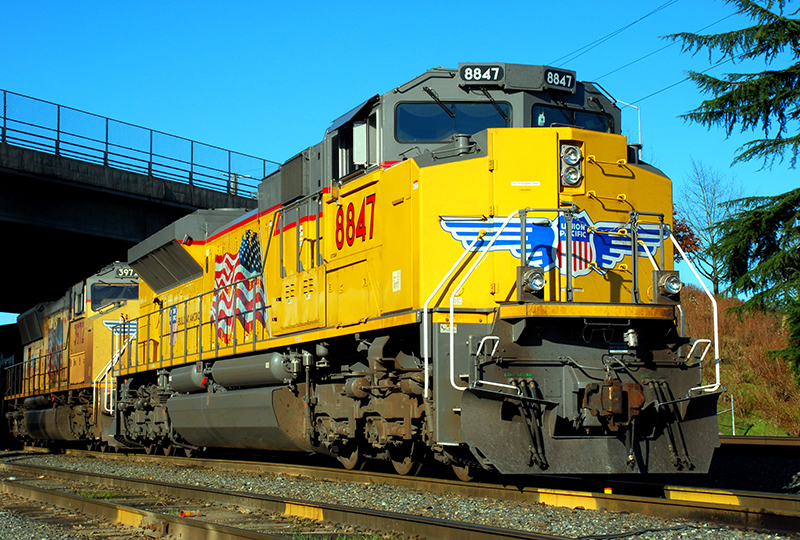 Later orders beginning with UP 8621 feature the front headlight mounted in the low nose of the locomotive. Photo by David Lange 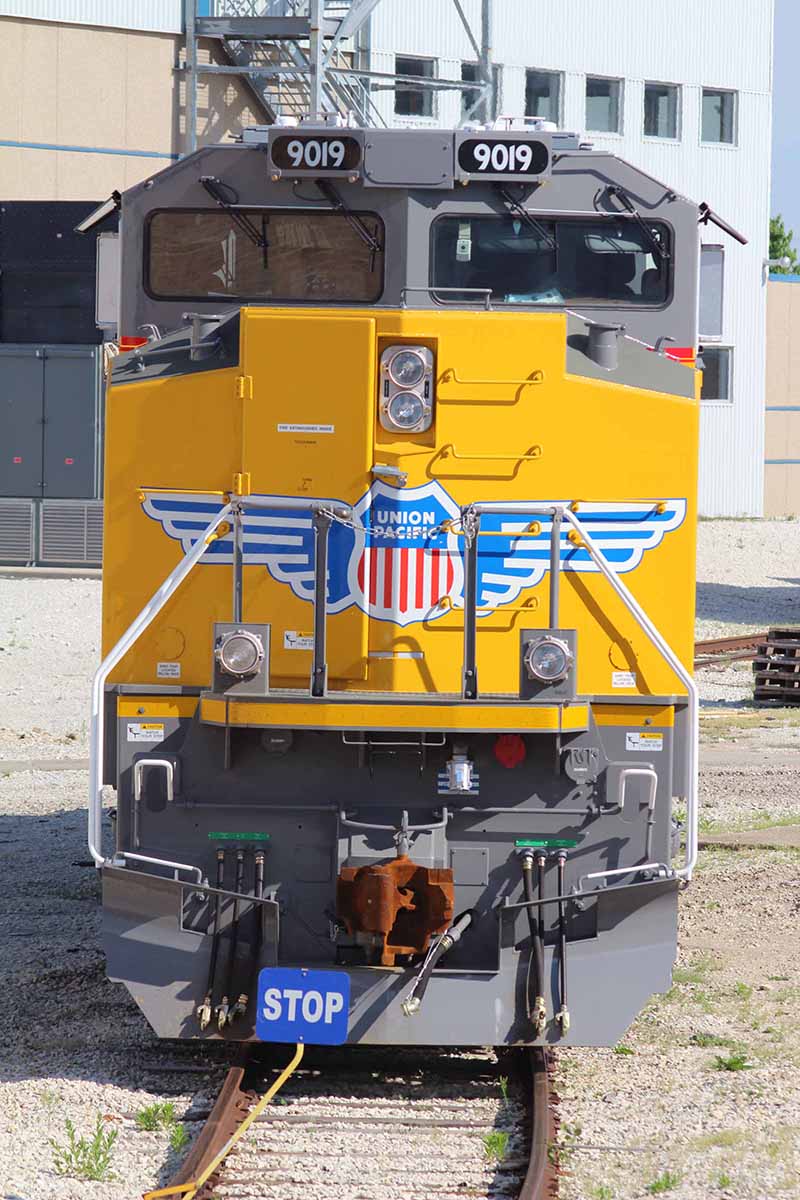 UP SD70AH 9019 poses for the photographer in LaGrange, Ill. Note the Track Image Recorder (TIR) camera suspended behind the front windshield on the conductor’s side. Photo by Sean Graham-White 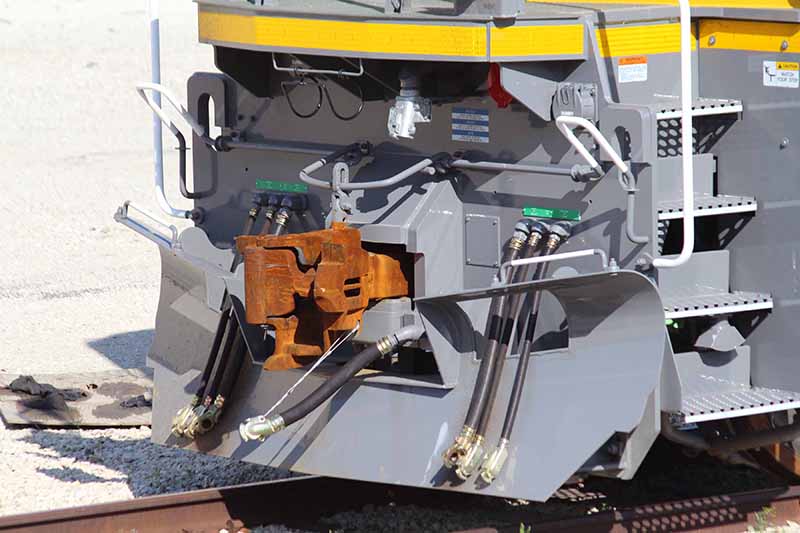 Among the usual plethora of multiple unit cables and receptacles, a silver candy bar-shaped 220V battery charging receptacle stands proud from underneath the anticlimber of UP SD70AH 9019. Photo by Sean Graham-White 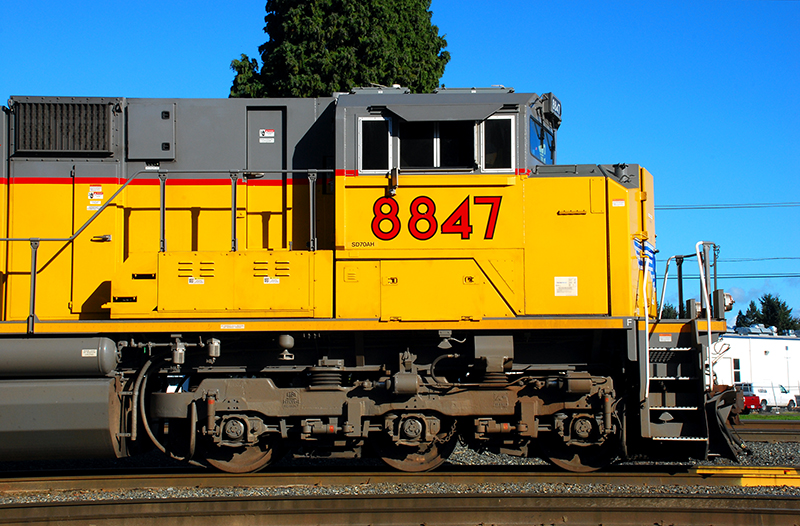 Compared to earlier orders, the small cab mirror is now mounted underneath the armrest channel for UP 8671 and up. Beneath the sill is the electronic bell and the “final” filters mounted just ahead of the air reservoirs above the fuel tank. Photo by David Lange 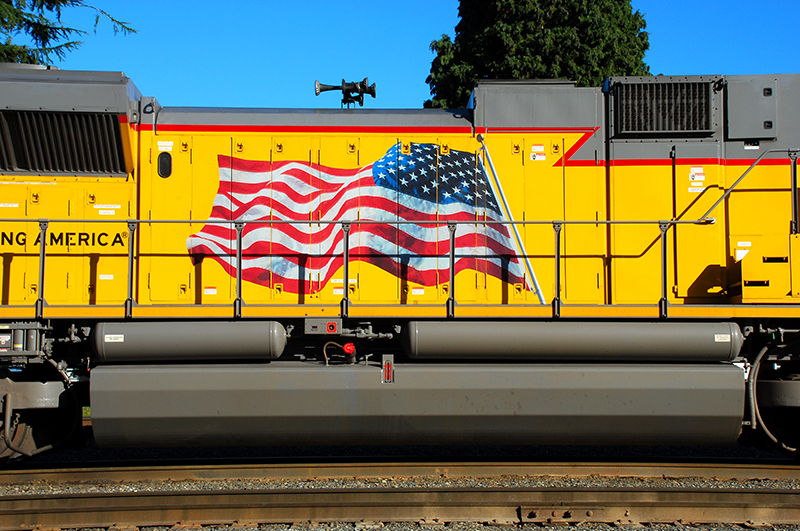 Key features to late-model SD70ACes and all SD70AHs include the water level sight glass visible just ahead of the radiator section beginning with UP 8711. Note also the simplified design of the traction motor blower compartment access door compared to earlier production. The horn bracket is formed into a rectangular bracket as well. Earlier units employed a cylindrical mounting platform for the K5LLA horn cluster. The long air tank to the right provides compressed air for the air start mechanism for the prime mover. The shorter tank to the left is the main reservoir for the train line air brakes. Photo by David Lange 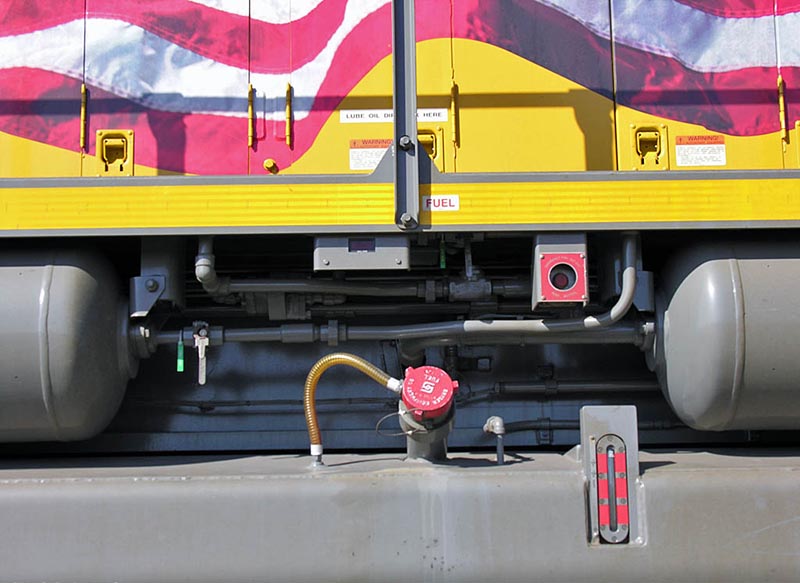 Digital and analog fuel gauges and air reservoir plumbing are shown in this photo of UP 8456. The emergency fuel cutoff button is located within the large red square mounted underneath the sill.  Photo by Rob Sarberenyi. 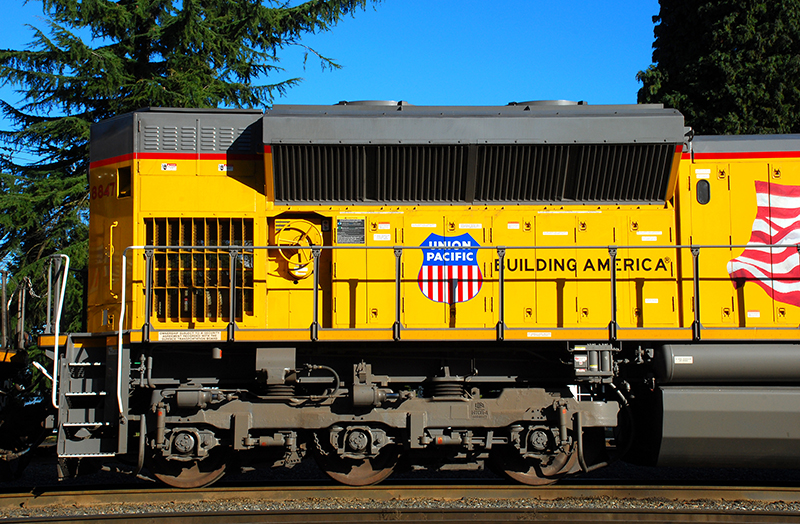 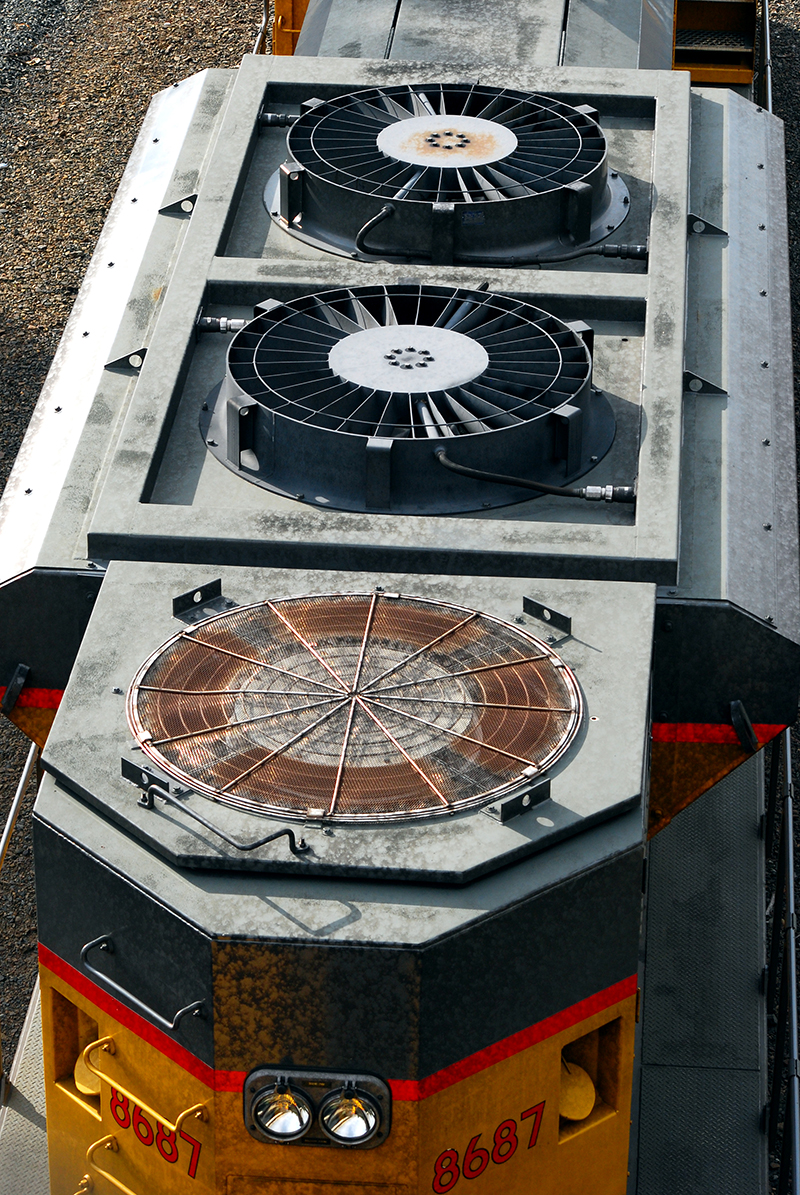 Note the rusty coloration of the fan grille atop the dynamic brake section on UP SD70AH 8687 – seen in Eugene, Ore., on June 19, 2016. Ahead of the dynamic brake fan are the two 52-inch diameter radiator cooling fans – each fed with two electrical conduits. Photo by David Lange 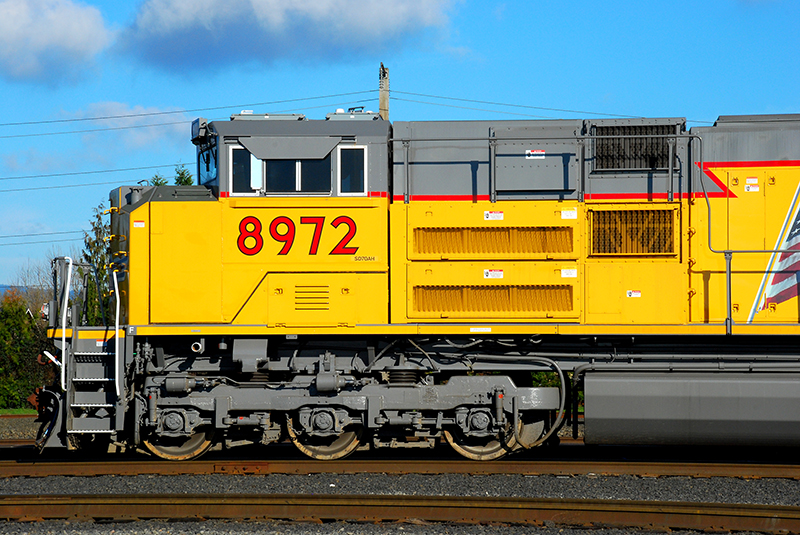 Just over perhaps a month old, UP SD70AH 8972 rests in the morning sun in Eugene, Oregon on Valentine’s Day 2016. The outline of EMD’s “WhisperCab” Isolated cab design is prominent in the morning light. The goal of the cab design is to provide reduced noise and vibration levels to the crew and equipment inside the operator’s cab. Behind the cab on this side is a large cabinet over the walkway area housing the inverters and associated hardware for the AC traction equipment. Photo by David Lange 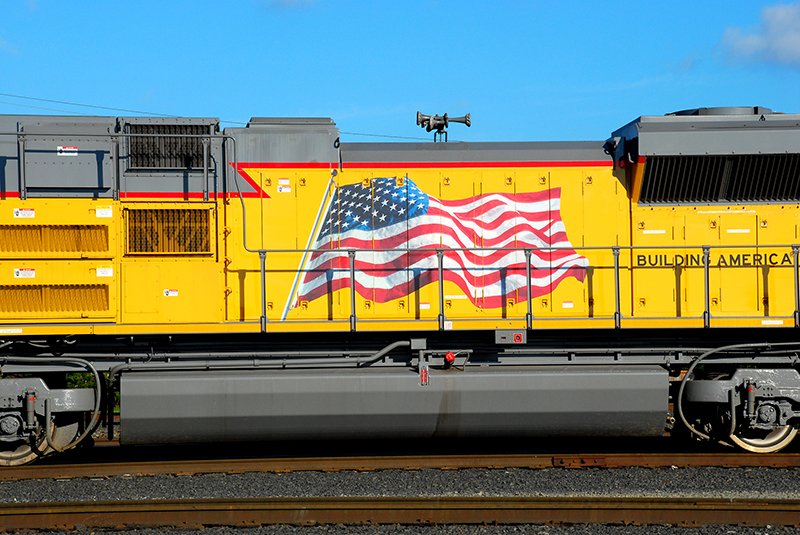 Of note here is the simplified sheet metal horn bracket atop the hood, appearing on late-production SD70ACes and AHs numbered UP 8784 and up. Earlier production units were adorned with a substantial-looking cylindrical base supporting the K5LLA horn cluster. Photo by David Lange 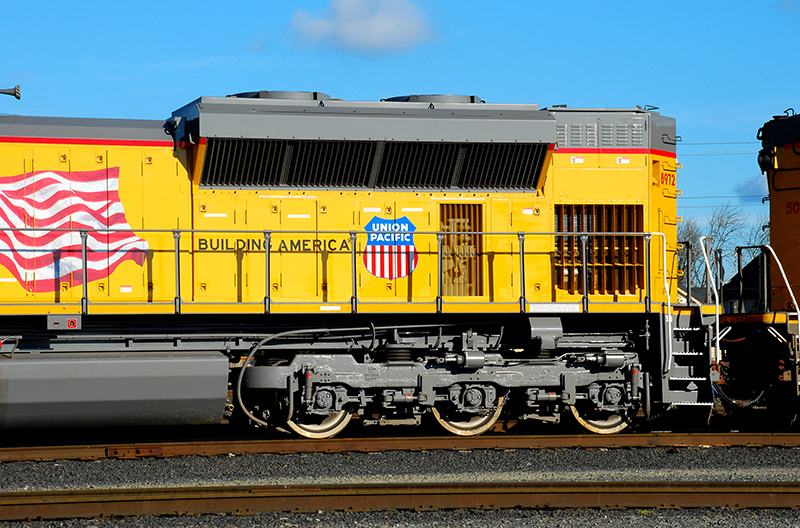 Usually buried in the shadows of most photos are the sander lines and fresh rust on the 42” wheels of month-old UP SD70AH 8972. The massive radiator section above is just getting accustomed to the task of cooling the effects of 4,300 horsepower produced via 16 cylinders thrusting away in the engine compartment just ahead. Photo by David Lange 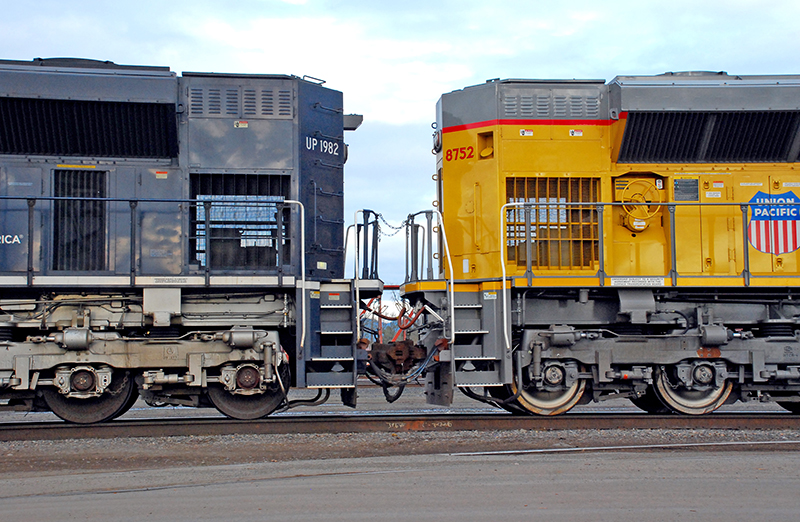 At first glance, other than the different paint, the rear section of these two units seem identical. Closer examination reveals a vestigial horn bracket above the rear headlight of the UP 1982, and a taller set of cooling louvers on the smaller access doors to the dynamic brake compartment compared to UP 8752. Note also the different jacking pad designs underneath the frame, different walkway light orientation and the 3-spoke hand brake wheel on the 8752. Photo by David Lange 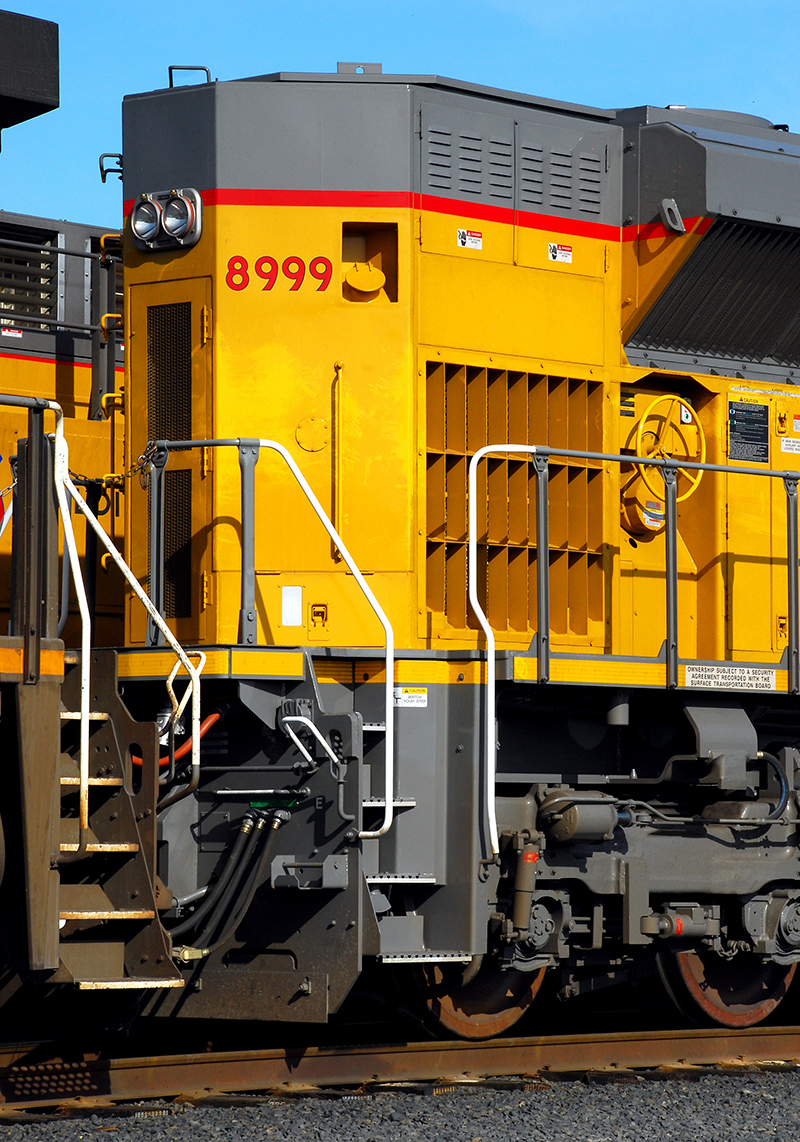 Compared to most stock HO locomotives such as the Walthers SD70ACe, the draft gear box surrounding the coupler shank is much narrower in real life. However, with a little bit of elbow grease, scale-width draft gear can be applied. This modification will greatly improve the accuracy of your model with minimal impact on operation. Photo by David Lange

Click on the link below for a spreadsheet containing a detailed roster of Union Pacific’s EMD SD70ACe and SD70AH fleet. This roster provides a breakdown of many of the unique spotting features that set each group of units apart from each other.

Like Union Pacific diesels? Read the rest of this feature in the October 2018 issue of Railroad Model Craftsman