Tangent’s new G34 gondola, available in Pennslvania, Penn Central, and Conrail, would be right at home on nearly any North American railroad from the 1960s to the present.

This 52-foot, 6-inch interior length corrugated-side gondola first saw production in 1966. Classified as G43-series models, production continued through 1970. This provides for Pennsylvania Railroad and Penn Central (PC) originals for this prototype. Tangent boasts this gondola is the most-produced example of this type of freight car produced anywhere during the 1960s.

The 100-ton gondola went into production to replace aging members of Pennsy’s fleet. Tasks included hauling steel and aggregate products, as well as scrap. The late-1980s saw modification to select G43s under Conrail ownership. An angled pair of racks went into the bed of the gondola to cradle rolls of steel. Following the 1999 breakup of Conrail, owners CSX and Norfolk Southern reportedly continue to use coil steel rack gondolas, while non-modified examples still find revenue jobs and maintenance-of-way assignments.

You shouldn’t consider this prototype to be an “East Coast” freight car by any means. I’ve seen these gondolas working in Illinois on coil steel trains between St. Louis and Chicago. Images from Tangent Scale Models’ owner David Lehlbach’s collection show the cars at work all across the Western U.S., in addition to appearances east of the Mississippi River.

You may not know it, but the gondola is one of the very first injection-molded plastic freight car models offered in HO. The early 1950s saw Mantua and Varney introduced 40-foot gondolas among their first plastic rolling stock releases. One look at Tangent’s new gondola and you’ll agree the hobby has come a long way in more than six decades. 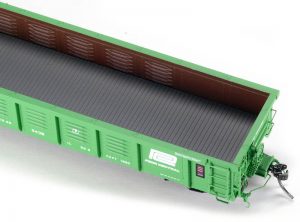 Tangent’s “Original 11-1966 G43” release represents the earliest appearance for this Pennsy-made gondola. This early production G43 includes corrugations running from end-to-end on all 12 panels on the gondola sides and dreadnaught ends. The sides include three separately applied placards with two wide plates on the left for “PRR” reporting marks and car number and a single narrow plate on the right for the road’s famous keystone herald. The finish of the model is a smooth-and-even coat of Pennsylvania Freight Car Red. This is the same hue you’ll find on Tangent’s G31B Pennsy gondola, which is among the manufacturer’s American Car & Foundry 70- ton welded drop-end gondola replicas. Though Penn Central became a reality in 1968, many of these 1966-made original G43s served long careers in this original decoration. Check Tangent’s website for a view of a well-worn original 1966 G43 still going in Pennsy paint in Fort Worth, Texas, in 1977.

Penn Central examples include G43B models built in 1969 and G43C examples that entered service in 1970. Both PC releases feature the road’s bright green with white lettering, including small “PC” herald. There are no separate placards on Tangent’s Penn Central gondolas. A production variant on G43B and G43C examples omitted corrugations on the outer pair of panels on each end of the car sides. This allowed for reporting marks and road number on the left to lay on the smooth panels. On the right side, the two outer smooth panels presented the white “PC” herald and ACI label.

Tangent presents the interior sides of its PC gondolas in Oxide Red color. On the G43B versions, Penn Central included wood floors for general service usage. This look provides a surface similar to what you’d see on a typical flatcar bed with wood planks lining the bottom of the gondola’s interior. Tangent presents its wood-bed version in a gray color and the planks include nail-head detail. To protect loads, Penn Central included cushioned draft gear. This extended-coupler version is only found on Tangent’s G43C Penn Central release.

Demonstrating the durability and use these gondolas received, this model introduced in the 1960s saw new service beginning in the late 1980s. Conrail turned a series of Pennsylvania Railroad G43 gondolas into steel hauling cars. A 1988 date marks the revision, which includes an angled rack present down the interior of the gondola. This rack served as a cradle for rolls of coil steel. Wearing Conrail Freight Car Red, the outer appearance closely resembles the early G43 Pennsy examples. The three separate placards remain with “CR” reporting marks and road number on left, while the single plate on right presents a white Conrail herald and black COTS label. The model, like the prototype, includes stencil stating the car is for coil steel loading only.

To outfit its Conrail coil gondola replica, Tangent sells a ready-to-use steel load. The $9.95 accessory presents eight round plastic rolls with thin black bands. Prototypically, you’d find four rolls riding in a gondola. This accessory provides enough steel coils to fill two gondolas. Tangent’s coil steel load offering should be applicable for the modeler to use in a variety of situations.

A set of four steel coils weighs 1/4-ounce, while Tangent’s Conrail G43 for coil service weighs in at 4 ounces. The standard G43 without coil steel rack replica weighed just less than 4 ounces. Measuring from the outer end of the gondola, this car is 53 scale feet. The metal Kadee scale-head knuckles provided by Tangent lined up perfectly with a Kadee Coupler Height Gauge. The wheels on both samples showed in proper gauge and demonstrated Tangent’s usual performance of ultra-smooth rolling quality.

When I first heard from David Lehlbach that he had another gondola coming out earlier this year, I wasn’t terribly excited. His other two (ACF 70-ton welded- side drop-end and Bethlehem 70-ton riveted drop-end) gondolas are great, but I didn’t think this model would be anything too different or special. After examining this new G43 and learning about the variations, I have a much different opinion. This is an excellent and very exciting release! Similar to the high-quality X58 boxcar, this new G43 gondola provides Pennsylvania and Penn Central devotees with a great addition to their collections. The wide use this G43 saw also means that modelers of about any North American railroad from the mid-1960s to the present can find use for this HO-scale G43 gondola replica. Tangent Scale Models sells this and its other replicas online and you’ll find it at select hobby dealers. The first production run sold out quickly, a second collection of HO G43 gondolas is now available.

Several road numbers available of each: 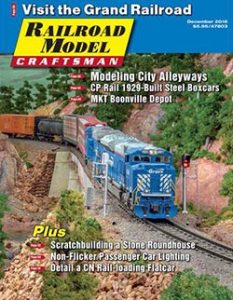