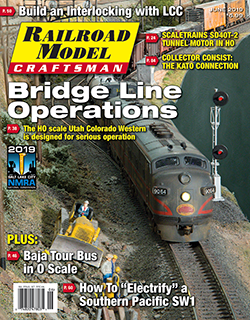 Earlier this year at the 2019 Amherst Railroad Show held in Springfield, Mass., ScaleTrains.com announced and delivered to customers the first examples of their new “Rivet Counter” version of the General Electric Dash9-44CW locomotive for HO scale. As part of their Rivet Counter line, this big GE is offered in multiple versions, with details and lettering specific not just to each railroad, but to each road number for each railroad representing specific time periods. For those who focus more on basic operation, and less about finer detail, ScaleTrains.com also announced a more affordable GE Dash9-44CW with a generic level of detail for their “Operator” series. We reviewed ScaleTrains.com’s premium Rivet Counter version.

Building upon the success of their Dash 8 series of locomotives, General Electric instituted further refinements to their locomotive line to introduce their Dash 9 series of locomotives in 1994. Between 1994 and 2005, over 3,600 six-axle DC-traction Dash 9 locomotives were produced by General Electric for customers in North America. Original customers included Santa Fe, Chicago & North Western, Southern Pacific, Union Pacific, BC Rail, BNSF, and Union Pacific. Norfolk Southern took a slightly different tack and initially specified Dash 9s with an older style conventional “spartan cab,” instead of the wide-nose cab then standard for most new road locomotives. In the interests of fuel conservation and reduced wear on components, NS’ version was also programmed with software limiting the prime mover output to just 4,000hp, with the provision to override as needed. Since then, the NS has rerated their Dash9s to 4,400hp, and is now in the process of converting their fleet to AC44C6Ms with AC traction and wide-nosed crew cabs.

For this initial release, ScaleTrains.com is offering their Rivet Counter Dash9-44CW in the following road names: Santa Fe (red warbonnet), Burlington Northern Santa Fe (Heritage 2, as delivered), Norfolk Southern (2000s era), and Union Pacific (full UP colors, ex-SP units). Each ScaleTrains.com Dash9-44CW is packaged carefully in the now-traditional plastic sleeve and clamshell within a large foam-lined box constructed of heavy cardboard. I’d recommend keeping this packaging around for worry-free transport down to the local train club, to a modeler’s meet, or other destination. Lifting this model out of the box, the immediate impression one receives is that this is a very heavy locomotive, mashing the scales at a substantial 23.875 ounces.

Our review sample is a Rivet Counter Dash 9-44CW finished for Burlington Northern Santa Fe in the Heritage 2 scheme. As is customary of this level, their GE Dash 9-44CW bristles with excellent detail throughout, especially under the side sills. As mentioned earlier, each unit is detailed to match a specific unit for a specific era. Even casual observers will notice the differences in headlight position and snowplow designs between the BNSF and NS units offered in this production, but the detail differences go much farther than this, including BNSF-specified features such as four-pane side windows, gull-wing cab roof, tri-fold access doors over the engine “cab” (compartment), and further differences in Hi-Ad truck side frames, stepwell configurations, different HVAC units, rear sand filler locations, knuckle holder locations, cab roof antenna arrays, and much more.

Regardless of the paint scheme, a cab interior is provided with painted seats and control stand, and a nice representation of an outside-facing grade-crossing incident camera is placed behind the cab window on the conductor’s side at least for the BNSF and NS units. Side windows are gently tinted in brown per the prototype as well.

Notably fine details include an especially crisp rendering of the windshield wipers in photoetched stainless steel, and windshield defroster detail up front. Out back, a see-through radiator section reveals the radiator fan housing visible through the etched metal side grilles.

Grab irons are formed from .008-inch wire and protrude just the right amount from the body shell. The handrails are molded from Celcon. All railings were mounted straight on our model.

Close inspection of the pad-printed lettering revealed no flaws nor fuzzy edges. In particular, the pad-printed builders and emissions plates look especially crisp. Even for seemingly lookalike locomotives produced in large batches, BNSF’s Dash 9 fleet in the Heritage 2 scheme possesses subtle variations also in decoration. For this initial release, ScaleTrains.com provides two different BNSF H2 paint scheme variations dependent on road number: green paint under the yellow stripe on the front of the nose, or orange paint underneath the stripe. Our review sample of BNSF 4313 sports the green paint which matches prototype photos of this unit.

With all of this detail under the sill, separating the chassis from the shell is actually straightforward if you do it slowly after first removing the couplers and draft gear. However, when putting the shell back on, users need to pay attention to ensuring that the details underneath the shell are out of the way of the chassis components on the way down. A gentle and slow approach is the way to go. Whatever you do, do not force the shell down. Under the Hood
Under all that detail you will find a heavy diecast chassis encasing a precision can motor. The can motor is mated to a pair of flywheels that provide propulsion to the worm gear atop each truck via universal shafts. All wheels are driven and provide electrical pickup. Atop the chassis is a motherboard which hosts a Loksound V5.0 decoder and Loksound Power Pack. The Loksound Power Pack provides smooth operation over dirty track and dead frogs by storing a reserve of electricity in its capacitor. LED lighting is provided throughout the unit for headlights, number boards, and ditch lights. New with this release are illuminated walkway lights located above the end platforms and in front of the step behind the cab. This is an especially pleasing touch that gives that extra sense of realism when operating your trains in low-light conditions.

Lighting and Sound Customization
To my eyes, the headlights, walkway lights, and number boards have the proper intensity when illuminated as-is from the factory settings. The headlights and ditch lights are especially bright. If you prefer something brighter or dimmer, each of these lights can easily be changed independently with the Lokprogrammer or via CV values. There is no need to fiddle with having to solder in a different value resistor. It’s all done via software controls.

With a Lokprogrammer, it was also very easy to remap lighting functions and to set the volume to my preferences. For instance, to allow the fully independent illumination of the numberboards, I assigned Function F3 to AUX3, and removed AUX3 from Function F8 (enable/disable sound). Yes, you can do the same via normal DCC programming equipment, but it might take a bit longer to tweak some of the more esoteric CVs.

To my ear, the BNSF Dash 9 that we tested has an accurate horn recording of a Leslie K3LAR2 per prototype. Of course, you can always choose from a wide selection of different horns and bells by changing the values of CV 48. And since this is a Loksound 5.0 series sound decoder, you can create and customize your own sound files to download into your locomotive. Sound is provided through a pair of “sugarcube”-style speakers located ahead of the radiator section. The physical horns themselves on top of the long hood are cast in brass and are impressively rendered, yet sturdy to the touch.

Weight and Operation
As mentioned earlier, the entire locomotive weighs in at 23.875 ounces – a hefty beast. In tests on the workbench and on the layout, our example performed smoothly at all speed ranges flawlessly under DCC control. On the test stand, we measured an impressive 4.7 ounces of drawbar pull. For the times when we prefer quiet operation, the provided V5.0 decoder delivers nearly silent hum-free motor operation over its predecessors. Pressing F8 will usher in the prime mover chugs and the occasional air compressor sounds so characteristic of these throaty four-cycle GEs.

The couplers provided with this model are of all-metal construction, self-centering and Kadee-compatible. If you prefer, Kadee #148 or semi-scale head #158 couplers install easily. Unscrew the screw for the draft gear box from the frame, tip the box for the draft gear skyward, and pull the coupler assembly out. Reverse the process for reinstalling the draft gear. Measuring against a Kadee #206 height gauge, we found the coupler height to conform perfectly.

If you are a modeler of big main line American railroading from the mid-1990s to today, or just an admirer of modern motive power, the highly detailed and smooth-running ScaleTrains.com Rivet Counter GE Dash9-44CW can be a welcome addition to your roster.