Before I share my experience with Iowa Scaled Engineering’s innovative new ProtoThrottle, I’d like to share a little bit of background. Like many of us, I’m a lifelong railfan and model railroader. Growing up, railroaders were my heroes, including the countless “rails” who took a few moments out of their day to talk to a geeky kid riding the passenger trains, hanging around the depot, and haunting the tower and yard office. When it comes to model railroading I’ve always been a big proponent of realistic model railroad operation. My first experience operating a model railroad was at a club layout in Park Ridge, Ill., back in the late 1970s. I was hooked. Shortly after that, I was introduced to the first hand-held throttle. While there were many variations, one that stood out was from Dynatrol, which had a big handle on the bottom corner that acted like a brake. Since then, I have become a professional railroader, first hired out as a conductor and switchman. I worked mostly in the yards, but did spend some time out on the road, and ran locomotives as a hostler. Later, I became a yardmaster and shortly after that went into management. So, while I was never an engineer, I have run plenty of trains.

When I first heard of Iowa Scaled Engineering’s ProtoThrottle, I thought it sounded pretty cool. This is a hand-held throttle that closely resembles and operates like a standard locomotive control stand. Could this be this the throttle to take model railroading to the next level? At the same time, I wondered about the size, cost, and what effort was needed to connect to existing DCC control systems. Let’s tackle each of these points one at a time. Size
The ProtoThrottle does have some mass to it, and seems wider than any other throttle currently on the market. However, it is not the tallest. Some folks with large hands could operate it easily, but for most of us, it will take two hands. The difference with the ProtoThrottle is, you get the incredible realism of notching the throttle up and down, throwing the reverser, applying the independent brake, and sounding the horn with the “valve” at the top of the throttle, much like operating a real locomotive. Being a professional railroader, I found it easy to imagine myself back in the engineer’s seat, with my left thumb on the brake and my right thumb manipulating the throttle and reverser. All it needs is an electric heater at a 45-degree angle off the right side of the ProtoThrottle for me to put my feet on! If you’ve ever operated a real diesel locomotive, you’ll know what I’m talking about.

The elastic strap on the back of the throttle is a great aid to help secure my hold on the throttle, but I found it a little too tight. I could only use this for a limited time before my fingers would fall asleep.

The lanyard hole is a great feature and the use of a lanyard is a must to protect the throttle from hitting the floor. The lanyard that comes with throttle was a little too short for me, but this is just personal preference. To me, the overall size of the ProtoThrottle is not an issue and I can absorb that in exchange for the realism in operation that the throttle provides.

Some folks have shared that while the throttle closely models the Electro-Motive Division-style control stand, it doesn’t match the older control stands used on early General Electric, Alco, Fairbanks-Morse, or Baldwin diesels. For me it was very easy to become happily engaged running a train with this throttle, regardless of what type of loco I was running. It should be noted that numerous locomotives from secondary manufacturers were rebullt with EMD control stands, and most all second-generation GEs and beyond were produced with EMD-style control stands. Cost
The ProtoThrottle currently retails for $482.00. To connect it to your NCE or Digitrax DCC systems, you will need an additional receiver that lists at $99.00, totaling $581. I have heard some modelers express their qualms about the cost, but then I’ve seen the same folks run out and buy, in a single swoop, two brand new top-of-the-line HO locomotives with sound which retail for $300 each, which brings that credit card right into the same ballpark.
Arguably, buying a ProtoThrottle may seem a big investment, but I believe this level of realism is well worth the cost of the hardware.

Ease of Connection
I tested the ProtoThrottle at the Greater Kansas City Model Railroad Club. I wanted to see what it would take to connect it to an NCE DCC system. I also use NCE on my home railroad, so I was familiar with it. I was impressed at how easy it was to install the throttle and connect it to NCE. The directions were clear and the setup straightforward.

As software and firmware continually evolve and improve with updates, we advise that you consult the manufacturer’s website and various online resources specific to the ProtoThrottle for the latest information and best practices in configuring these throttles.

Operation
On model railroads that operate with two-person crews, one is the conductor, the other is the engineer. Many layouts that operate this way have activated the braking feature on their throttle to add a bit more interest to the job for the engineer. One of the challenges with conventional throttles and the braking feature is that it’s hard to tell if you applied the brake by just pushing a button. With the ProtoThrottle you clearly know when using the brake handle. 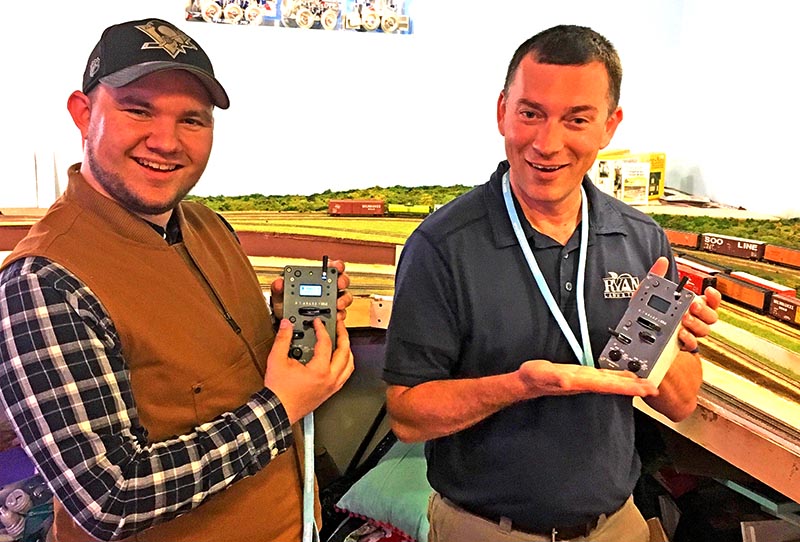 If you are modeling more modern operations, the ProtoThrottle allows the conductor and engineer to interact prototypically. In today’s railroading environment, the conductor cannot go “in between” freight cars until the engineer has set the reverser to center and set the independent brake (some railroads call this the “red zone” or “three-step protection”). When the conductor asks for protection before “going in” to “couple air hoses,” the engineer can do exactly this with the ProtoThrottle. You could add this safety requirement to your operating sessions. To see an example, check out this video of ProtoThrottle operations on the Seaboard Central with two professional railroaders: youtube/ldgnFG0yM-4 Model Railroad Operating Bliss
It was easy for me to connect the ProtoThrottle to the NCE system and run a locomotive equipped with sound, right out of the box. This does have a pretty big “gee whiz” factor the first time you do this. With that said, it is a terrific feeling operating a ProtoThrottle in combination with a model equipped with a state-of-the-art decoder.

Shane Mason let us use a Spokane, Portland & Seattle E7A equipped with an ESU LokSound 5 decoder that he had programmed to use with the ProtoThrottle. The combination was awesome! The loco responded to each notch of the throttle, it coasted when we notched down and braking was smooth. I could spend all day in the basement with this combination!

Shane modified CV3 acceleration and CV4 deceleration. CV4 was set to 255 so it coasts after you return to idle. Shane set CV3 about 100-140. That is a good setting for slow takeoff but it doesn’t take forever to get up to speed. Feel free to experiment with different values for CV3. The next one would be to tweak the air/brake set and release sounds on the independent brake, so when you set or release the brakes you hear more of that air running out.

Summary
We invest a lot of time and money to get our model railroads up and running, and go to great efforts to operate like the prototype. In my opinion, the ProtoThrottle is the next level in prototype operation!

Perhaps your budget can’t accommodate equipping each of your operators with one. In that case, you might consider assigning one ProtoThrottle to your yard crew to give their sometimes mundane task an extra boost of operating realism. Working a yard job and using the throttle controls to coast and drift as you make up and break down trains will seem like the next best thing to “marking up.”

The real question is, when will Iowa Scaled Engineering build a throttle based on Radio Control operations (RCO) like the prototype is using today, complete with a belt pack? And will it come with a mandated safety vest and eye protection? This review appeared in the February 2020 issue of Railroad Model Craftsman! Subscribe Today!