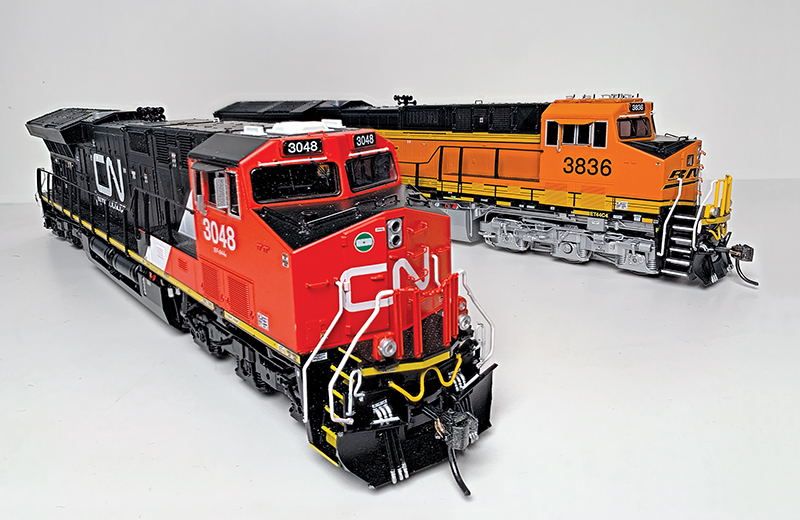 InterMountain has now released a second production of their Tier 4 Evolution locomotives reflecting the latest physical changes seen on the prototype.

In 2017, InterMountain released its first run of General Electric’s Tier 4 Evolution Series, their current production road freight locomotive. Based upon experience and data collected in real time from the field, GE Transportation (now Wabtec) has continued to refine the locomotive design from the initial production units. Corresponding to the prototype, InterMountain has now released a second production of their Tier 4 Evolution locomotives reflecting the latest physical changes seen on the prototype.

So what are the changes? Road-specific details aside, three distinct phases of Tier 4 Evolution GEVOs can be easily discerned. The first Tier 4 GEs produced were a group of field test and demonstrator locomotives painted in blue GE demonstrator paint schemes, most of which were deployed to the BNSF and Union Pacific beginning in 2012. In addition to the distinctive paint, these “Phase I” pre-production Tier 4 GEs were built with a taller “engine cab” (GE parlance for engine compartment hood section) than later units. This taller engine compartment was intended to accommodate additional emissions control equipment. However, the additional equipment was deemed unnecessary to meet Tier 4 standards and was never installed above the prime mover. Unlike Phase I units, both Phase II and Phase III share a shorter-height cab with the air horn cluster mounted on top of the section. With regard to the exhaust stack section, Phase I and Phase II units share the same boxy flat-top roof profile for the exhaust stack “cab” ahead of the radiators. Due to clearance issues encountered at coal loaders on the CSX, the rooftop section around the exhaust stack was revised by GE at the beginning of 2016 to feature an angled lower profile similar to the radiator section. Units produced since 2016 with this angled exhaust “cab” are considered Phase III Tier 4 GEVOs. 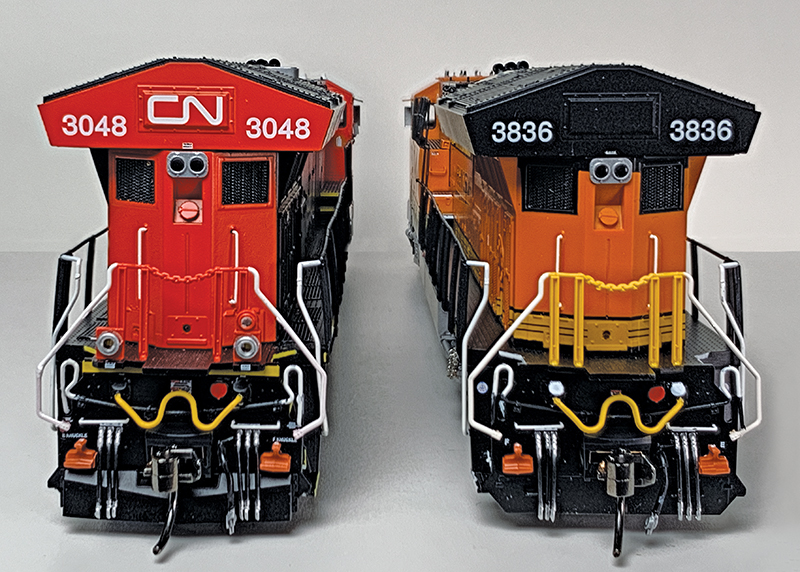 Our review samples include BNSF 3836, an ET44C4 finished for Burlington Northern Santa Fe in the Heritage 3 scheme; and Canadian National 3048, an ET44AC. CN 3048 was constructed in March 2016 by GE in Fort Worth, Texas, which is now operated by Wabtec. BNSF 3836 is part of a 75-unit order that also emerged the same year from Fort Worth. As of this writing, BNSF owns 324 ET44C4s, while Canadian National operates 281 ET44ACs. Numerous other railroads also operate Tier 4 GEVOs.

Representing the pinnacle of InterMountain’s diesel line, both of these models bristle with a maximum level of detail throughout, especially under the side sills and atop the cab roofs. Each unit is detailed to match a specific unit of a specific order. If one looks closely for the physical distinctions between each of these locomotives, one will find many differences between the BNSF and CN models beyond just the paint. Per prototype, CN 3048 features ditch lights and a red marker above the anticlimber at both ends, a rock pilot at the rear, along with open rectangular grating on the walkways and stepwells to disperse larger quantities of snow.

The BNSF model exhibits the proper C4 truck side frames with center axle lift pistons unlike the standard GE Hi-Ad trucks on the CN unit, and other BNSF-specified or standard GE features such as a nose door with window, standard GE “nub” solid walkway surfaces, round holes vs. rectangular apertures for the steps in the stepwells and an entirely different PTC antenna array atop the cab roof. Many more subtle differences exist between these two models.

A side view of the new InterMountain GEVO.

Regardless of the paint scheme, the cab interior on each model is provided with seats and control stands in a chocolate color. The side windows are tinted a dark brown per the prototype as well.

The standout fine details on each of these InterMountain models include an exceptional class-leading rendition of the corrugated radiator grilles in photo-etched stainless steel, with perforated holes revealing the X-shaped reinforcements behind the outer screen. The radiator section is otherwise solid plastic behind the grilles, but the finely scaled corrugations are worthy to behold. The hangers for the brake chains look great and have proven to withstand inadvertent finger pressure as well.

The grab irons are formed from .008-inch wire and protrude just the right amount from the body shell. The handrails and stanchions are molded in Celcon. All railings were mounted straight on our model. Close inspection of the pad-printed lettering revealed no flaws nor fuzzy edges…

Read the rest of this review in the June 2021 issue of Railroad Model Craftsman! Subscribe today!